In episode 122 of Star Trek: Voyager, the character Seven of Nine is asked whether it would be better to live as a Borg (part of a collective consciousness) for a normal lifetime or as an individual for one month. She advocates for the short-lived individual option, stating that "Survival is insufficient." This same meme permeates the post-apocalyptic novel Station Eleven, by Emily St. John Mandel. In both fictional settings the characters learn through painful life experience, that pain, suffering and struggle are only worthwhile if, at the end, human culture and the human condition are stronger and better.

In recent decades, educators involved in science education reform and curriculum innovation have stressed that it's not sufficient that you as the instructor have taught the material; what matters is that the students have understood and learned the material. With this re-prioritization, educators have moved away from a focus on lecture-style content delivery, towards more student-centered learning approaches, and the deliberate use of assessment to test whether, in fact, students have actually learned what you have taught. Teaching is insufficient; learning is essential.

I'd like to make the case that learning is also insufficient. At this point in humanity's relationship with our home planet, Earth education needs a new goal: that students and graduates will use what they have learned about the Earth to help tackle problems of climate change, resource degradation, pollution of air and water, soil deterioration, biodiversity loss, natural hazards, and environmental justice. They may use what they have learned in their personal lives or professional lives, for big decisions or small. The key is that they are using it. This workshop, with its focus on Earth Education for Sustainable Societies, is the perfect venue to move from teaching with a goal that students will learn what we are teaching, towards a goal that students will use what they have learned to make the world a better place.

In this essay, I take a look at some findings emerging from behavioral and neuroscience research on the more general question of how the human mind uses what it knows about the world, and combines that knowledge with perceptions about what is happening in the world right now, and uses those two information streams to make decisions about what actions to take in a complex and rapidly changing environment.

These findings begin from the observation that in order to cope with the complexity of stimuli bombarding our senses, the human mind divides up space into "objects" and divides up time into "events." We don't retain a pixelated mental screen shot of everything we have ever seen and experienced; instead we encoded discrete objects. Around me in the café where I am writing this, I perceive "table," "chair," "rug," "child," "toy truck." I can consciously choose to zoom my attention in on the flowers in the rug, or even on the individual stitches in one flower, but normally my brain saves processing power with the simplification of "rug."

Likewise, for time. Although time is continuous, humans experience an unfolding series of discrete events with beginnings and ends, each a separate distinct unit. Seeing a play, attending a wedding, cooking dinner are events, as are World War II, the Depression, and the Holocene. Shorter events can be nested within longer events, such the field camp event within the longer undergraduate event. There are well-established methods for studying how humans divide up the flow of time into events, such as having participants watch movies or read narratives and indicate where they perceive one event ending and the next event starting.

It turns out that study participants show good agreement about where events begin and end both across participants and over time within the same participant. Event boundaries are associated with substantial transient changes in brain activity, as measures with functional magnetic resonance imaging (fMRI). The moments chosen as event boundaries are associated with changes in location, agency (who is the main actor), and motivation. Above all, events are about predictability. Within an event, one can predict what will happen with relatively high accuracy. But when the event ends, predictability plummets. During the wedding event, predictable things happen, such as music, walking down an aisle, vows, kiss. When the wedding event ends, the participants scatter in many directions and their next actions are unpredictable.

So what does this have to do with Earth education? Well, this system of dividing the experienced flow of time into events lies at the heart of one model of how Homo sapiens have evolved to cope with challenging situations. Since Earth educators are now thinking about how can we help our students become better at coping with supremely challenging situations, perhaps there is something to learn here.

The model is called Event Segmentation Theory (EST) and was developed by Jeff Zachs and his students at Washington University. Figure 1 summarizes the model. The central box indicates the event model that is currently governing the person's approach to the current situation. For example, if my model is that I am in a wedding event, that event model directs me as to what I should expect and how I should behave. The mind continuously takes in information from perception about what is going on and continuously makes predictions about what will happen next (2 boxes on the left side of the diagram). If the prediction and the observations do not match, an error detect signal arises (top box). I would be more inclined to call it a "change-needed signal," but whatever you call it, it means that an update or reset of the event model is needed. It's time to change one's model of what is going on.

That reset, or update, takes into account observations of what is happening and also prior knowledge that the person has about how various kinds of events tend to play out or are supposed to play out. That prior knowledge sits in the box labeled "Event Schemata." Enculturation of young people into the society they are growing up in places a premium on populating the Event Schemata library with models for various kinds of events that are prominent in that culture: what happens at a wedding, at a funeral, at a church service, during the school day, during an election campaign, during a conference. Having an Event Schemata library well populated with relevant schemata for the types of events likely to be encountered prepares the young person to pivot from event to event with minimal cognitive load and maximum likeliness of acceptable behaviors and successful decisions. 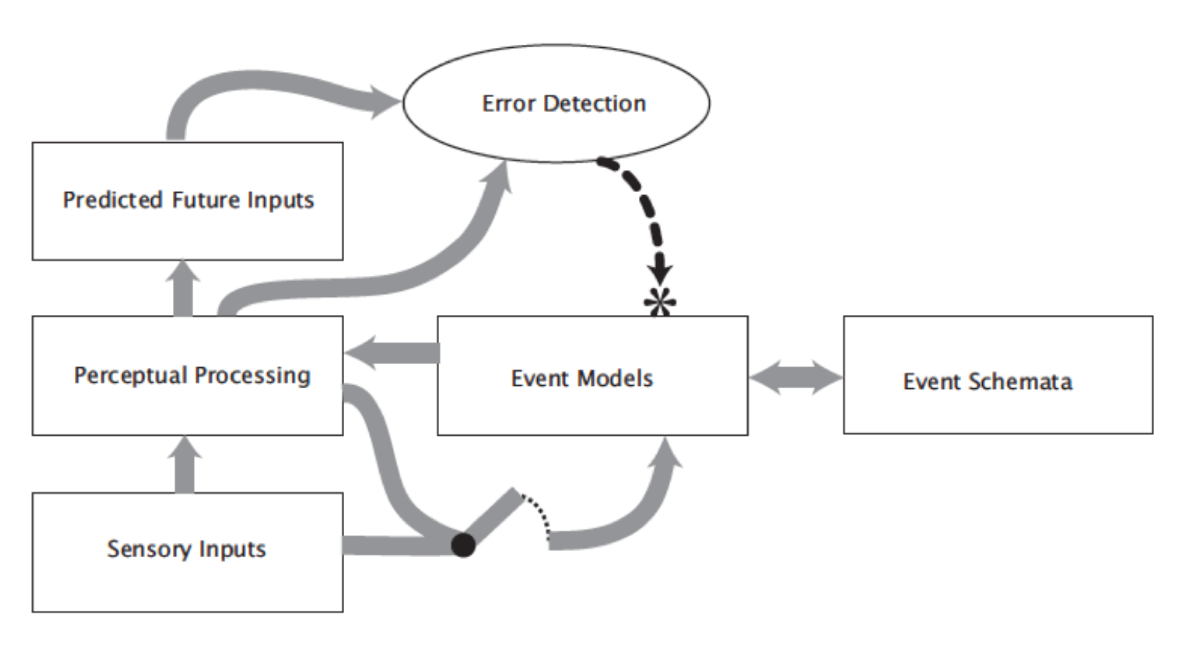 Provenance: Jeff Zachs, used with permission
Reuse: If you wish to use this item outside this site in ways that exceed fair use (see http://fairuse.stanford.edu/) you must seek permission from its creator.

Figure 1: Diagram of event segmentation theory from Zachs, et al (2007). When perception of what is happening in the world around does not match predicted input, an error is detected. This results in a signal to update the event model using information from the world (sensory inputs) and alternative event schemata. Much of science education to date has focused on how to populate learners' event schemata library (the right hand box) with scientifically normative schemata.

I think that at least some of this idea is applicable to science education. Like social enculturation, much of science education concerns itself with helping learners build schemata that match normative schemata of how the world works, in other words, populating the right-hand box in the EST diagram. Let's take, for example, concept of reinforcing and balancing feedback loops (aka "positive" and "negative" feedback loops.) This is a concept at the heart of the Systems Thinking that InTeGrate required all instructional materials to foster.
The default prediction within an event is that things will keep on going more or less as they have been. But sometimes, one observes that rather than things going on more or less as they have been, things are accelerating. This set off an "error detection" in EST terms, and EST predicts that the comprehender will then attempt to reset the event model to better match what is being observed. For a person with a well-developed and ready-at-hand Reinforcing Feedback Loop Event Schema, the existing stable event model could then get revised to include a feedback loop. Or perhaps one notices that instead of continuing on an even keel, things are going up and down and up and down. A person with a Balancing Feedback Loop Event Schema could revise their event model to include such a loop.

If this idea is valid and applicable, what does it imply for teaching and learning? First of all, we need to recognize that the process of deploying what one knows about the world so as to use that knowledge in making decisions about what to do next is cognitively complicated, even in situations that resemble the context in which our ancestors evolved. Stretching those cognitive mechanisms to larger scale problems should not be expected to be simple.

The model of figure 1 would seem to offer several leverage points for education. We can, and should, continue to work on finding better ways to populate learners' event schemata libraries with evidence-based mental models that have predictive power, like feedback loops, for example. In addition, it would seem to be helpful to have students explicitly practice making predictions based on their growing understanding of the processes they have been learning about. This may help to strengthen the "Predict Future Inputs" limb of the EST cycle. Several InTeGrate modules have such predication activities built into them.

Finally, we need to understand more about how the leftward-pointing arrow works, the one that goes from [Event Schemata] to [Event Models]. That arrow represents the process by which a general-purpose event schema waiting on stand-by is called into service as input to revise the event model that is governing real-time behavior and decision making. Cognitive scientists don't yet know much about how that process works.
I'd enjoy finding a group of people at the workshop who would like to brainstorm about what geoscience educators and geoscience education researchers can do to increase the probability that students will not only learn what we are trying to teach them, but will use what they learned to solve important problems and make wise decisions.

Acknowledgements: The ideas in this essay have benefitted from discussions with Tim Shipley (Temple University) and Jeff Zachs (Washington Univ.)