Anne Egger, Central Washington University, based on an activity developed by Modeling for Understanding in Science Education (MUSE)
,

Resources in this top level collection a) must have scored Exemplary or Very Good in all five review categories, and must also rate as "Exemplary" in at least three of the five categories. The five categories included in the peer review process are 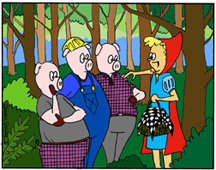 ×
This is an image of one of the cartoon cards used in this activity to explore the nature of geoscience.

Provenance: MUSE http://ncisla.wceruw.org/muse/naturalselection/materials/section1/lesson1B/handouts/handout2/index.html
Reuse: If you wish to use this item outside this site in ways that exceed fair use (see http://fairuse.stanford.edu/) you must seek permission from its creator.
In this activity, groups of students work with a set of 13 cartoons printed on cards. Each group attempts to put them in order to tell a coherent story, articulating observations and inferences they made in order to do so. Groups share their stories with each other, which are very different. The activity offers the opportunity to highlight the differences between observation and inference, and between data and evidence. In addition, students see how the same observations can lead to a variety of inferences, that geological datasets are inherently incomplete, that sharing results with the community may lead to revision of ideas, and several other important aspects of the process of science are highlighted. Using cartoons provides an approach to these ideas that does not require content knowledge, and thus us very accessible for students with little background in science.
Historical Geology, Geology, Evolution , Paleontology, Geoscience | College Lower (13-14) | Not for Online

Expand for more detail and links to related resources


Readiness for Online Use

Follow the links above to find activities from Teach the Earth on a specific topic.
Used this activity? Share your experiences and modifications

By the end of this activity, students will be able to:

The cartoon cards provide a means of exploring geoscientific thinking without requiring any content knowledge. Specifically, the activity focuses on the incomplete nature of geologic data, how observations can be interpreted differently based on the background knowledge and experience that a person brings, and how it is not always possible to use an experiment to test an hypothesis.

I have used this activity at the very beginning (the very first class) of a science methods course for elementary education students, where I use about 3 hours over two class periods to do the complete activity. It would be appropriate in a number of other venues, however, including historical geology courses and general science prep courses. It works best near the beginning of a course, because no background knowledge is needed and the focus is on developing understanding of the process of science that can then be used throughout the course.

I introduce the idea that this activity is about the nature of science, but since everyone is coming into the class with different levels of scientific content knowledge, we are going to use a content-neutral example to talk about the nature of science: cartoons. I put students into groups of 4-6. Each group receives a full set of thirteen cartoon cards (Acrobat (PDF) 2.9MB Aug17 21). I tell the students to put their set of cards into an order that they can defend, based on observations made of the cartoons. The last part is important: they will have to tell the story they've developed to the other groups in class. Then I let them get started.

Initially, students think they know the story: there's Little Red Riding Hood, there's a wolf, there's grandma... but wait, what are these three pigs doing here? Slowly, they realize that there are elements of several stories that they know, but there are many unfamiliar components shown in the cartoons. Groups take a variety of different approaches, and I wander around the room making sure that they are making progress. I say things like, "Tell me why you put these three cards in this order."

After about 30 minutes, I stop them, and we move to the next phase. Before we start presenting to each other, we discuss as a whole class the difference between observation and inference. When they present their story, they will have to discriminate between the observations they made from the cards and the inferences that they drew from those observations. We also discuss the prior knowledge that they've brought with them - their knowledge of the story of Little Red Riding Hood and the Three Little Pigs, for example. Then each group presents their story to the whole class, and anyone can challenge or ask questions.

The presentation process has several outcomes:

After the presentations, we discuss the benefits of getting feedback from their peers, and how this reflects what scientists do. We also discuss the inherently incomplete nature of the geologic record, and how not all science involves experimentation. Subsequently, students reassemble in their groups and make changes to their story based on what they've learned from the other groups. Sometimes this results in a complete overhaul. Sometimes students want to stick with their story. Most often, they modify it somewhat to accommodate the details that were noticed by other groups that they had not initially seen.

If there is time or interest, students can then describe their stories to each a second time. Usually, it is clear that the stories have converged somewhat - not that they are all the same, but there are some key pieces of evidence that all students use, some sequences that are the same in all groups. This provides an opportunity to point out another aspect of the nature of geoscience and the geological record: while we don't necessarily have the whole story, the snapshots that we do have are not random. There are not infinite possibilities for how the evidence fits together, and there are some we can rule out. There are some pieces of evidence that are more robust than others, and we can use those as anchors.

As a follow-up, I ask students to select a card and sketch it in their notebook, then write two observations of that card, two inferences that derive from those observations, and the prior knowledge or experience that influenced their inferences.

This is a very fun activity that the students generally enjoy quite a bit. It opens up many possibilities for discussion about the nature of science in general and geoscience (or historical science) specifically without requiring students to have any content knowledge. It begins to build their confidence that they can act as scientists themselves, because they can start to separate observations from inferences. And it is a good activity to use on the first day of class because it gets the students used to the notion that they will be working in groups and actively participating throughout the course.

Despite the amount of discussion and practice that students have had during class with these concepts, they still struggle to separate their observations from inferences or interpretations. For example, they will say that an observation is that "Grandma looks angry". But really, that is an inference based on the observation that her eyebrows are pointed down, etc. Separating these out takes repeated practice.

Because I use this in a class for pre-service teachers, we also spend time talking about the benefits of using this kind of activity in their own classrooms. We discuss how prior knowledge might differ - that it would be a very different exercise for a student who didn't have the story of Little Red Riding Hood in their background.

Very good instructional notes are available at the MUSE website.

As a follow-up assignment, I ask students to select a card and sketch it in their notebook, then write two observations of that card, two inferences that derive from those observations, and the prior knowledge or experience that influenced their inferences. This is a graded assignment, but it is not a very significant number of points.

The original activity is Sequencing Events: The Cartoon Activity, and is part of a larger series of activities on natural selection developed by Modeling Understanding for Science Education. This site is no longer active; here are the Cartoon Cards (Acrobat (PDF) 2.9MB Aug17 21).