This page is authored by Rebekah Green, Western Washington University.

The culminating assignment builds upon a series of shorter assignments. Early in the course, student identify hazards impacting the jurisdiction by examining hazard maps, state mitigation plans, geological studies and past disaster impacts. They then build a hazard profile for their jurisdiction, ranking identified hazards based upon key physical characteristics and community impacts. From this hazard profile, they prioritize three to four hazards to be included in their strategic mitigation plan. As part of another assignment, teams review compliance of the jurisdiction's hazard mitigation plan to the Disaster Management Act of 2000.

Aided by their hazard profile and review of the mitigation plan, student groups are ready to develop a mitigation strategy. During the last two weeks of the term, students follow FEMA 386-3 guidelines for prioritizing the mitigation actions discussed in class lectures and readings, considering the resources and culture of their jurisdiction. With a list of prioritized hazards and mitigation alternatives, the teams then develop a 15-year timeline for implementing the selected mitigation.

The course is an upper-level urban planning course at a four year university. Class size is typically between 20 and 40 students. The class includes two-hour class periods divided between lectures and team-based application activities that build towards the final project assignment described here. Homework includes readings and individual case studies of completed mitigation projects. Students should have familiarity with urban planning concepts and team projects prior to engaging in this assignment. This assignment can be carried out for any jurisdiction, and as such, is easily adaptable to other locations. The assignment is also purposefully modular. While it does build upon earlier work selecting a jurisdiction, identifying and prioritizing hazards, and reviewing mitigation plans, these earlier activities could be removed and an instructor could pre-select a jurisdiction and one or more hazards impacting the jurisdiction. Furthermore, the instructor could truncate work after teams prioritized mitigation alternatives, rather than having teams continue on to develop a mitigation strategy.

To kick off the culminating assignment, each team identifies two or more mitigation goals for their jurisdiction's top-ranked hazards during an initial class period. They then agree upon objectives for each of the goals. The instructor helps teams distinguish between mitigation goals, objectives and actual mitigation actions. At the end of the class period, one or more groups informally presents their hazard-specific mitigation goals and objectives. As needed, these are clarified. The class then brainstorms a list of mitigation actions that would meet these goals and objectives. The instructor encourages students to suggest a wide range of actions, including some that may be technically, financially, or socially untenable to begin showing the importance of having a set of criteria for ranking and selecting mitigation actions.

In a following class period, teams develop a set of criteria for evaluating their mitigation options, using the STAPLEE approach developed in worksheet #4 of FEMA 386. The STAPLEE approach requires teams to identify social, technical, administrative, political, legal, economic and environmental criteria that would be appropriate for evaluating the merits of hazard mitigation alternative actions in their jurisdiction. The worksheet forms a matrix with the mitigation action alternatives forming rows of the matrix and the STAPLEE criteria forming columns. Typically teams only begin identifying appropriate STAPLEE criteria in class and much of class time is used to discuss and clarify how criteria may differ by jurisdiction (e.g. a Gulf Coast jurisdiction's environmental criteria may be compliance with a local coastal wetland protection ordinance, a conservative jurisdiction's political criteria may be that any mitigation option not require new taxation or restrict land use in a particular way). Teams fully specify their evaluation criteria outside of class.


The teams conclude this culminating assignment by creating a 15-year timeline for implementing their top-ranked mitigation actions. They must specify which of their top-ranked options should be performed first and which may need to be implemented later (e.g. an earthquake awareness campaign may need to occur before putting a bond measure on the ballot to support retrofitting of local schools). They also specify how mitigation actions will be funded. As a resource assumption, teams are told they have a budget of .1% of the jurisdiction's annual budget for each of the 15 years. This amount, they are told, may be sufficient for hiring a hazard mitigation specialist, but not for funding major public works projects. To fund larger mitigation projects, they must identify or develop local funding sources or identify federal granting sources, many of which are summarized in class lecture.


Teams write a 10-page report on their mitigation strategy, explaining their goals, alternatives, selection criteria, ranking and implementation timeline. They present their strategy during the final class period. 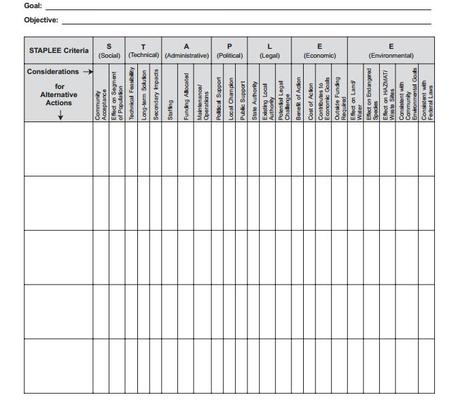 Provenance: FEMA
Reuse: This item is in the public domain and maybe reused freely without restriction.