Prepared by Alana Edwards and Mary Beth Hartman, under the direction of Dr. Leonard Berry, The Center for Environmental Studies, Florida Atlantic University 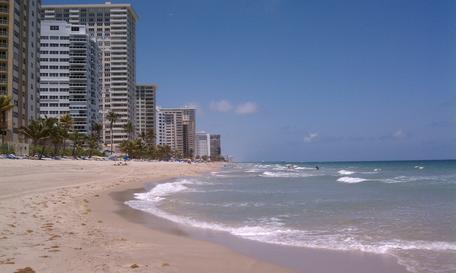 Provenance: Photo courtesy of 'epitomized1' and accessed via: http://enjoyfortlauderdalefl.com/places-to-stay
Reuse: This item is offered under a Creative Commons Attribution-NonCommercial-ShareAlike license http://creativecommons.org/licenses/by-nc-sa/3.0/ You may reuse this item for non-commercial purposes as long as you provide attribution and offer any derivative works under a similar license.
Ft. Lauderdale is one of the most vulnerable cities in the United States. Intersected by canals and waterways with the beach to the east and the Everglades to the west, it comes as no surprise that this picturesque city is the "Venice of Florida." Sea level rise, the increasing risks of hurricane-strength storms with accompanying storm surge, and the impact of rising ground water levels all threaten Ft. Lauderdale.

A 2007 study ranking the world's cities most at risk to sea level rise found Miami (defined as greater South Florida) to be number one in terms of property value and in the top ten in respect to people (OECD 2007). The reasons for these risks include the low lying topography, our desire to build along the coasts, and our region's exposure to tropical storms and hurricanes which become more damaging with each increment of sea level rise.

This case study selects the city of Ft. Lauderdale, a coastal community with a population of 165,000, and identifies the specific short- and long-term risks. It also discusses city and county responses to those risks, plans for sustainability in the face of a changing (and sometimes uncertain) environment, and explores additional measures that might be necessary. At the state level, there is only limited recognition of these problems. However, at local levels in South Florida, current impacts and future projected impacts have motivated mayors, county officials, and parts of civil society co-operatively to plan mitigation, resilience and adaptation planning responses. The four southern counties of Monroe, Miami-Dade, Broward (Ft. Lauderdale), and Palm Beach have formed the Southeast Florida Regional Climate Change Compact (The Compact) and are working together on mitigation and adaptation planning. The Compact has produced a series of reports and hosts an annual Summit, which allows for broad citizen input into these issues. The universities in these counties are similarly engaged with active research programs, public workshops, and outreach.

The case study will assess the vulnerability to various levels of sea level rise and storm surge, identify responses planned or underway, and explore additional measures that might be necessary as the city plans its resilience.

Individuals with expertise/responsibilities in the following areas have helped create the case study:
Key teaching points: