This is a partially developed activity description. It is included in the collection because it contains ideas useful for teaching even though it is incomplete.

In this activity, students will learn about hyporhiec exchange and the nitrogen cycle, while playing a fun and interactive board game. In the game, players move through surface water collecting nitrogen compounds. Next they travel on hyporheic paths where players can convert the compounds they collected using oxic and anoxic equations. The player to first collect six nitrogen gas victory points wins the game. There are cards that are drawn at specific surface water locations, which cause various game actions and contain educational content.

Students will become familiar with common nitrogen cycle equations, anoxic and oxic regions, part of the function of the hyporheic region, and other sustainability concepts like hypoxia.

Students have to think about optimal strategies as they play the game, both in terms of collecting nutrients and competitive stealing of nutrients from opponents.

They have to communicate with each other in order to play. This would be a good ice breaker game to get the students to start forming friendships within the class.

The hyporheic zone performs an important function in transforming nutrients from the surface water. Rivers are a geologic feature, which contain this zone, in playing the game students become more familiar with the important role played by the hyporheic zone in cleansing streams and rivers and learn more about the nitrogen cycle.

This activity is appropriate for lab or lecture. Ideally you would be in a space with tables (not small desks). An hour should be enough time to play the game, it can be adjusted for longer or shorter time periods. I think it is ideal for small 20 person classes, but it can scale up or down if you print an appropriate number of game boards. Ideally 3-4 players would play on a single game board, but 2-6 is possible. To play the game you need to print out the game "pdf", tape four sheets together to make the game board, and cut up the cards, nutrients, and victory points. Additionally, each group needs a regular 6-sided die, and each player needs a game piece. (I have used polished rocks and game pieces from other games.)

The players do not need to have mastered any skills to play the game, so it could be used to introduce hyporheic exchange and nitrogen cycle concepts. It could be used in environmental science, geology, or chemistry courses at the introductory college (or even high school) level or as a club activity.

This activity is a board game. In order to play you need to print the pdf found at:
http://susa.stonedahl.com/hyporheicgame.html

This contains an introduction to the game, rules, a game board, cards, nutrient pieces, and victory point cards. You will also need a regular six-sided die and one game piece per player. 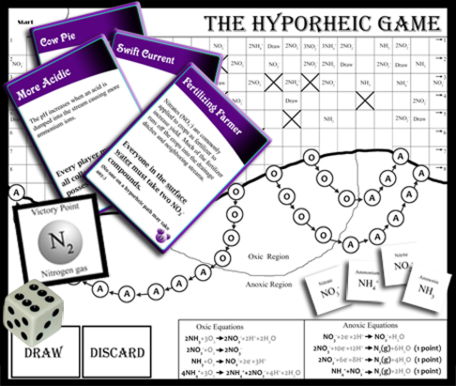 Provenance: Susa Stonedahl, Saint Ambrose University
Reuse: This item is offered under a Creative Commons Attribution-NonCommercial-ShareAlike license http://creativecommons.org/licenses/by-nc-sa/3.0/ You may reuse this item for non-commercial purposes as long as you provide attribution and offer any derivative works under a similar license.

The instructor should start by reading the rules provided in the game ".pdf". Print it out if you want to play and make sure you are comfortable playing before using it with a class. Students do not seem to read the instructions particularly well. There are no safety hazards involved in this activity.

I have not done a formal assessment of this activity. I believe it is successful from listening to conversations between players during the game and the increased familiarity the players have with the vocabulary used in the game.