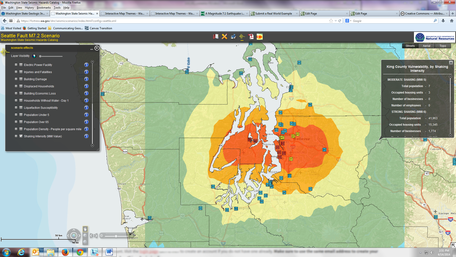 Provenance: Carla Whittington, Highline Community College
Reuse: This item is offered under a Creative Commons Attribution-NonCommercial-ShareAlike license http://creativecommons.org/licenses/by-nc-sa/3.0/ You may reuse this item for non-commercial purposes as long as you provide attribution and offer any derivative works under a similar license.
The Pacific Northwest lies along a convergent plate boundary called the Cascadia Subduction Zone. Within this tectonic setting there are three sources of earthquakes: 1) Subduction zone interface earthquakes can occur where the Juan de Fuca plate plunges beneath the North American plate, 2) Deep earthquakes can issue from the Juan de Fuca plate as it passes underneath the North American continent, and 3) Shallow quakes that occur on faults in the North American Plate. All three sources of earthquakes produce different levels of seismic risk to people living in the Puget Sound lowland. While Subduction Zone Interface earthquakes have the highest potential magnitude (> M.9) and duration of shaking (2-5 minutes), Shallow earthquakes in the North American crust may create the highest intensity of shaking and ground accelerations. Deep earthquakes, while not the highest intensity or magnitude, have the most frequent recurrence intervals (30 years for M. 6 or above). These deep earthquakes can cause significant damage and trigger liquefaction and landslides throughout the region.

As part of an ongoing effort to understand (and reduce) earthquake risk in Washington State, the USGS and other agencies have worked to create ground shaking/intensity scenarios for many of the local crustal faults, as well as the Cascadia subduction zone and deep quakes. For the shaking scenarios, the WA DNR has produced loss-estimates using Hazus-MH, a regional loss estimation tool produced by FEMA. The scenarios and loss estimate data are available through an online GIS portal: the Washington State Hazards Scenario Catalog.

This case study will assess the vulnerablity of individuals and communities to earthquakes from different sources. The Washington State Earthquake Hazards Scenario Catalog can be used by city planners, emergency responders, or individuals (students!) to investigate the potential impacts of earthquakes to their communities and neighborhoods. The scenarios show the shaking intensity expected from each of the three sources and estimates of damage to roadways, bridges, hospitals, schools, and other facilities, as well as underground pipelines, major power lines, and water supplies.


Individuals with expertise/responsibilities in the following areas have helped create the case study:


EERI, 2005, Scenario for a Magnitude 6.7 Earthquake on the Seattle Fault
https://www.eeri.org/projects/earthquake-scenarios/seattle-fault-scenario/