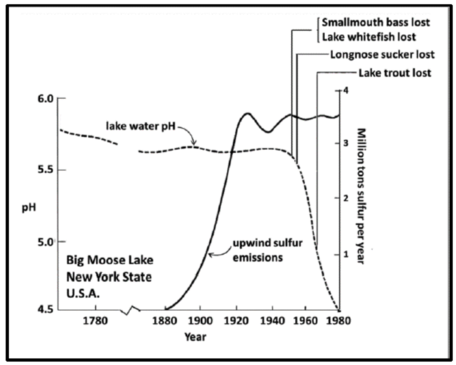 Provenance: Bill Stigliani, Center for Energy & Environmental Education, University of Northern Iowa
Reuse: This item is offered under a Creative Commons Attribution-NonCommercial-ShareAlike license http://creativecommons.org/licenses/by-nc-sa/3.0/ You may reuse this item for non-commercial purposes as long as you provide attribution and offer any derivative works under a similar license.
Big Moose Lake, one of the largest lakes in the Adirondack Mountains of New York State, lies downwind from the old industrial heartland of the U.S. that stretched from western Pennsylvania through Illinois. A steep rise in industrial activity began in this region around 1880, and increased to such an extent that by 1900 the U.S. produced more steel than the rest of the world combined. Heavy industry continued as a dominant economic sector up until the latter decades of the 20th century. Industrial output was fueled by dirty coal, which upon combustion released copious amounts of sulfur dioxide (SO2) into the atmosphere where it was chemically transformed to sulfuric acid. Prevailing winds blew the acidic sulfur emissions from the heartland northeasterly into the Adirondacks where they were trapped and prone to deposit on the soils in a phenomenon that became known as "acid rain." The mountain range, home to over 2,000 pristine lakes and ponds, had long been known for its spectacular fishing that drew hundreds of thousands of anglers to the region every year. In the 1970s, park rangers began to notice a sudden and unexpected increase in lake water acidity, and a concomitant decline in fish populations that died off in the order of their ability to survive in acidic lake waters. This regional catastrophe led to a national debate about the need to strengthen air pollution policies, and was a major consideration in the formulation of the Clean Air Act Amendments of 1990.

Big Moose Lake was one of the few lakes where accurate, simultaneous data existed for long-term trends in pH, upwind SO2 emissions, and fish populations. As illustrated in the figure, these data provide a concise glimpse of the etiology of events that led to the acidification of the mountain lakes. Notice that the pH of the lake water remained essentially constant (except for a slight decline due to natural senescence) over the period from 1760 to about 1950. Then within the space of 30 years, the pH declined more than 1 whole pH unit (corresponding to a factor of 10 increase in acidity). It can also be observed that the rapid onset of pH decline was not synchronous with the onset of acidic sulfur emissions from the industrial heartland. Rather, this "tipping point" in pH occurred 70 years after SO2 emissions began and 30 years after the emissions peaked around 1920. Why the delayed response?

A lake receives most of its water not from direct wet precipitation on its surface, but rather from runoff and groundwater flow through the watershed soils draining into the lake. The soils buffer a lake against acidification because they possess what soil chemists call "Cation Exchange Capacity" (CEC). It is the CEC that serves to neutralize acidic inputs that would otherwise flow unhindered into the lake. [See the accompanying class activity "Nature's Alka-Seltzer" for a more detailed discussion of lake water buffering by watershed soils, and why tipping points in pH occur.] A lake's resilience to acidification is determined by the size of the watershed's CEC. Even relatively well-buffered watersheds can lose their CEC over time when inputs of acid rain are high enough to surpass the rate at which the CEC can be naturally replenished. When the CEC declines to about 5% of its original capacity, the lake is highly vulnerable to the kind of rapid acidification experienced by Big Moose Lake.

The risk of lake acidification in the Adirondacks has been mitigated over recent decades as a result of two factors. One was the enactment of Title IV of the Clean Air Act Amendments of 1990, which specifically targeted acid rain by mandating upwind sources to significantly reduce their sulfur emissions. This has been achieved through a highly successful, market-oriented cap-and-trade system with active participation by the utilities industry. Over the period from 1980 to 2012, annual SO2 emissions from coal-fired power plants declined from 17.3 tons to about 3.3 tons (81% reduction).

The second factor has been the natural replenishment of CEC in the soil by addition of base cations from the weathering of bedrock. Recent studies suggest that with the continued decline of acid rain inputs and the increase in CEC, many lakes are gaining back their resilience and the ability to mitigate the impacts of acidification-stress to aquatic biota. The return of trophy-sized trout to some lakes and streams that had become fishless is one manifestation of this comeback.

How this example is used in the classroom:
By and large we are taught to think that the future will be merely a linear extrapolation of the past. In contrast, the example of Big Moose Lake highlights non-linear behavior and tipping points in the functioning of ecosystems. Students will better understand "systems thinking," which grasps the idea that an important quality of any interacting system is non-linear outcomes.