Making geoscience more relevant: A game of catch up

To learn more about public attitudes towards geoscience, we collected data from 92 local middle school students who attended a geoscience-themed outreach event on the University of Arizona campus in 2010. The event included a short lecture from a Department of Geosciences professor on careers in science, several hours of hands-on science activities, a raffle for geological prizes, and a demonstration of a volcanic eruption using a trashcan. During the 5-hour event, we talked about climate change, weather, flash flooding, groundwater, soils, and dendrochronology. Identical surveys were administered before and after the event, and we used non-identifying information to connect the pre- and post-outreach surveys to individuals. Our audience self-identified as approximately 48% Hispanic/Latino, 35% Native American, and 17% white or other. Fifty nine percent (59%) self-identified as males, 35% as females, and 6% provided no response. Approximately 80% of the students indicated that they planned to attend college after graduation. 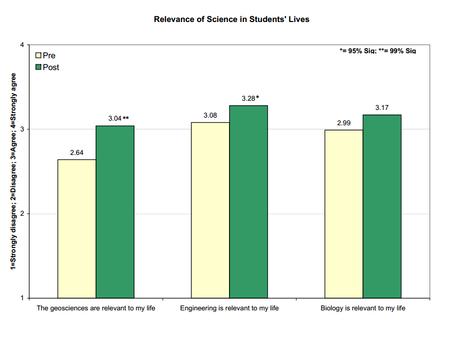 We found that, after the event, students generally agreed that 'The geosciences are relevant to my life.' And, the students more strongly agreed with the statement that 'Engineering is relevant to my life.' There was no significant change for the biology statement, and this was not expected since there was little focus on biology during the event.

Besides providing useful evaluation data, this study told us a lot about our audience. Our audience was obviously interested in geoscience to begin with; otherwise they would not have attended the event. But, prior to the event, they did not generally view geoscience as relevant to their lives as other popular STEM fields. Afterwards, the survey responses indicated that geoscience had more or less 'caught up' to these other areas in terms of personal relevance. Though we did not collect long term data, we observed that several students, parents, and teachers attended our subsequent outreach events.

What does this mean for our recruiting efforts? While we cannot generalize this small sample to represent the Tucson community, we can make a few interpretations. First, we know that 80% of the students were planning to attend college. And, based on their participation in the Arizona Mathematics, Engineering, Science Achievement (MESA) program, we know that these students were leaning towards pursuing degrees in STEM fields. We suggest that, had these students not attended our event, they would have continued to possess a relatively weak awareness of geoscience. While it is still too early to know if any will become geoscience majors, we use information like this to justify our continued outreach presence in the Tucson community.