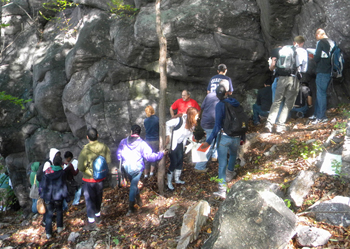 The information on this page was provided by Alec Gates, Chair of the Department of Earth and Planetary Sciences at Rutgers University, Newark, and compiled by Carol Ormand in 2010.

Jump Down To: The Turnaround | Strategies for Rebuilding | Community Outreach | Looking Forward

Unlike most Earth Science departments, the Department of Earth and Environmental Sciences (DEES) at Rutgers University, Newark, focuses on applied earth sciences, primarily serving students who want to pursue careers in the growing environmental consulting sector in New Jersey. They offer a Ph.D. program in Environmental Science (geology track), and 100% of their graduates from that program have found employment in academic, research and industry positions that require a Ph.D. Graduates with MS degrees in Environmental Geology or Environmental Science are primarily employed in the environmental industry. The department is also heavily engaged in educational outreach programs, and has collaborations or connections with the Newark Museum and the local K-12 school system. You may well wonder, "How did such an unusual focus develop?"

The Turnaround: From Struggling to Growing

When Alec Gates first came to the department, in 1987, it was in decline. As in most departments across the country, the oil boom in the 1970s had led to rapid growth in the number of geology majors, followed by a similarly rapid decline in the bust years. By the late 1980s, the department had only 3 undergraduate geology majors, 4.5 marginally active faculty members, and no research facilities. Its graduate program was so weak that it was suspended. When a faculty member retired, he was not replaced. Alec left, taking a job at the New York State Geological Survey. Although he had no intention of returning, he was persuaded to take a leave of absence.

Discovering that working for the State Survey was not for him, Alec agreed to return, under one condition: that one of the remaining faculty members, Andy Vassiliou, work with him to rebuild the undergraduate program. Together, they were able to revitalize the program. Focusing all of their energy on increasing the numbers of undergraduate geology majors, they offered special topics courses that exposed students to geoscience career options and research opportunities with faculty. Eventually, they reached a point where there were 45-50 majors. While that clearly put them in a much stronger position, they still had no graduate program, no research labs and minimal funding for research. Alec saw the growth of the undergraduate program as the foundation for a more complete rebuilding effort. The success convinced the administration to allow the department to replace retiring faculty but not at the level of support for a strong research program.

Strategies for Rebuilding: Making the Most of Opportunities

Rather than compete with other, nearby, strong traditional geology programs, Alec thought that the department would do better to carve out its own niche. He asked, "How can we distinguish ourselves?" In retrospect, given their location, his answer seems obvious. Because they're located in one of the most polluted locations in the U.S., he chose a focus on environmental aspects of geoscience. As he says, "It's difficult to convince typical geology faculty and students who want to study mountains to come to Newark, New Jersey. But for people who want to study pollution and urban environments, this is the best place in the world. And being so close to New York City is a bonus for recreation."

During the department's next external review, Alec described his vision to the reviewers. Establishing partnerships with Rutgers University-New Brunswick and the New Jersey Institute of Technology and utilizing resources at the Lamont-Doherty Earth Observatory (more info) , Princeton University, Stony Brook University, and Brookhaven National Labs -- all within 100 miles of Newark -- the department could build a top notch education and research program in environmental geosciences. The reviewers were sold on the idea, and their endorsement helped Alec to convince the university as well. As a result, the department was able to reinstate the graduate program with a Ph.D. for the first time, to hire research caliber faculty and to give them research laboratories. Fortunately, the first of these new faculty was Lee Slater, who brought a new level of professionalism to the department that helped attract both faculty and students. As with everything, this rebuilding took time. However, at this point, the Department of Earth and Environmental Sciences -- with only six faculty members -- brings more research money in to the university than any other department in the College of Arts and Sciences.

Throughout the process of rebuilding his department, Alec remained keenly aware that the more connections the department could make with other organizations, the more valuable they would become to the university. With that in mind, DEES faculty have worked with the Meadowlands Environmental Research Institute (MERI) of the New Jersey Meadowlands Commission (formerly the Hackensack Meadowlands Development Commission) on research in environmental issues. Projects include environmental geophysics of landfills, chromium pollution of soils and air pollution fallout. MERI has provided funding for these projects.

As the department chair, Alec does not have as much time as he'd like to maintain an active scientific research program. In its place, he has focused his energy on community outreach and educational research. Via NSF's OEDG and GK-12 programs, he has been funded to conduct education projects that send graduate students from the department into local K-12 classrooms to teach hundreds of students each year about applications of geology. In these programs, prior to participating in the applied geological activities, only 9% of the K-12 students reported that they would consider studying geology. After the activity, 66% would. Clearly, this program has a huge impact on students' perceptions of geology. Outreach activities also include educational enrichment opportunities at the Newark Museum (including Dinosaur Day, which drew 9,500 people).

Given the large number of students at Rutgers University, Newark who are focused on finding a job when they earn their Bachelor's degrees, DEES also recognized the critical importance of developing alliances with the local environmental industry. They built an advisory board of Vice Presidents or higher from about a dozen environmental companies. These individuals both advise the department and recruit students for internships and jobs.

When he heard about a new type of degree program springing up, the Professional Science Masters (PSM) degree, Alec saw yet another opportunity. His department quickly assembled a Master of Business and Science (MBS) curriculum: half science, half MBA, for the fledgling program at Rutgers. This program will train students who envision themselves in management positions at scientific companies. Companies, for example, that conduct environmental analyses. Similarly, they've developed an MPA program in environmental sustainability, taking advantage of a nationally ranked program on campus. This degree is designed for scientists choosing careers in the public sector.

Through his work with local K-12 schools, Alec realized that one factor leading to the low number of Earth Science majors in college is simply lack of exposure. In New Jersey, the only experience most students have with geology is in 8th grade (or before), if then. Unlike biology, chemistry, and physics, there is no AP Geology exam, so there is no incentive for high school students who enjoy science to learn geology. So Alec made a deal with some of his department's alumni who teach in the New Jersey K-12 school system: he will give them all of the teaching materials from the introductory geology class at Rutgers University, Newark, including the exams. If they teach a class using his materials, and their students pass his exams, they earn Rutgers University credit.

Through all of these efforts, the Department of Earth and Environmental Sciences is working to make geology accessible, interesting, and relevant to K-12 students, to Rutgers undergraduates, and to the community at large. And as awareness and appreciation of the geosciences grows around them, the department becomes more and more valuable to the institution and to the community. In particular, their focus on environmental issues and their alliances with other organizations have allowed this once-threatened department to thrive. While Alec initiated the vision that has led to this growth, he is quick to point out that he could not have done it alone. He credits his faculty colleagues, the university administration, and his partners in the community for making that vision a reality.