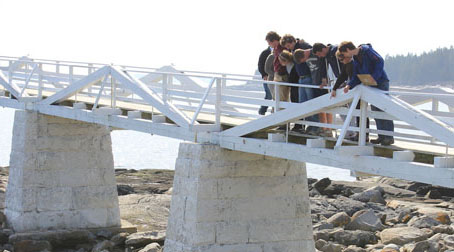 ×
The information on this page was provided by Rachel Beane, in the Department of Earth and Oceanographic Science at Bowdoin College, and compiled by Carol Ormand in 2010, with updates in 2012.

Jump Down To: Two Retreats: Opportunities for Reflection | The Process of Transformation | The Results | Lessons Learned

Introduction: Not a Typical Geology Department

In the fall of 2009, the Bowdoin Geology Department had an external review. In the process of preparing for the review, the department recognized an opportunity to redefine themselves. They had not been a typical geology department for the past several decades, even for a small department (3 faculty members) at a small liberal arts college: the three faculty members were a petrologist, a geomorphologist, and a physical oceanographer. In 2009, a newly hired oceanographer chose the Geology Department as her intellectual home, making the department even less typical. Moreover, the number of majors was small (3-7 majors/year) given the college's outstanding location for field studies on the Maine coast. As the review approached, the department set aside time for reflection and strategic planning via two retreats.

The first retreat focused on Earth System Science, and included faculty members from several departments on campus. All of the geology faculty were involved, as well as representatives from physics, chemistry, biology, and environmental studies program. As the discussion revolved around integrated earth systems thinking, the faculty involved in this retreat focused their attention on the question of how to prepare the next generation of scientists. Their consensus perspective was that as the Earth is changing, so must the study of the Earth change over time.

The second retreat was a more internally-focused preparation for the department's external review. During this retreat, the faculty noted their shared interest in systems thinking, and they considered the question of how they could strengthen this aspect of their academic program. Consulting recent publications from the National Research Council, as well as an article in Liberal Education on educating the next generation of citizens and scientists (see references), they reflected on possible changes for the department. During the departmental review, reviewers offered constructive criticism and had significant conversations with the Dean and President. The department welcomed the criticism and used it as a catalyst for the transformation.

The Process of Transformation

The department's central approach to curriculum revision was to examine their curriculum (and each contributing course) with a focus on students' needs, and with an eye to future citizens. Working backward from their twin goals of educating future citizens about earth systems and the process of science and educating future scientists to be systems thinkers, they built a sequence of experiences that would fulfill those goals. They thought about how to structure their introductory level courses to engage students -- most of whom will not become scientists -- in authentic scientific research, investigating some aspect of the earth system. They developed a new, 200-level integrative course in biogeochemistry that explores the earth system from an interdisciplinary perspective. They revised existing courses to add or strengthen a systems thinking component into every class. They devised new courses, where appropriate, to fill the gaps in their new framework. And they added research-project and capstone courses that further develop students' earth systems perspective. In short, they revised their curriculum to meet the anticipated learning needs of future students.

The departmental website describes the details of the new Bowdoin Earth and Oceanographic Science curriculum . Major features include:

Perhaps one of the most interesting outcomes of this curriculum development is the 200-level Biogeochemistry course. This course responds to the external review visiting committee's recommendation to balance multiple pathways into the major with a common, integrative course. As discussions about an earth-system-science-based curriculum proceeded, it became clear to the department that a 200-level course in biogeochemistry—one of the quintessential ESS concepts—could become the "unifying experience" to provide the vehicle for creating a student cohort that will explore the EOS major together. This is quite a leap from the usual geology curriculum sequence of Physical Geology --> Mineralogy --> Petrology. It is a clear reflection of the department's transformation and an indication of how far they are from being a traditional geology department. It is also a direct outgrowth of their focus on students' needs as future citizens and potential scientists.

One very real consequence of the department's transformation was the college's realization that to do justice to the new curriculum, the department would need to grow. The department that initially had three faculty members, now has six: two solid-earth faculty, two surface-processes faculty, and two oceanography faculty. Previously the average number of graduating seniors was seven; department faculty were thrilled when twenty-eight sophomores recently declared a major in Earth and Oceanographic Science. They credit this increase in majors in large part to the revised curriculum, an increase in the breadth of the faculty, and a fall department field seminar in Acadia National Park.

Here are a few of the key references the Earth and Oceanographic Science Department at Bowdoin utilized as they re-designed their curriculum: