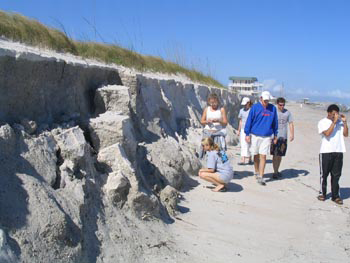 ×
The Department of Geological Sciences at the University of Florida was nearly eliminated for budget reasons in 2009, in spite of an excellent external review in 2006. Here's how they responded. The information on this page was provided by Mike Perfit, Chair of the Department, and compiled by Carol Ormand in November, 2009.

You can also hear Mike describing what happened in the American Geosciences Institute's webinar on Strategies for Departmental Survival and Viability During Economic Downturns . At this webinar, Mike joined Geoffrey Feiss (retired Provost, College of William and Mary) and Michael Loudin (Manager, Global Geoscience Recruiting & Development, ExxonMobil) in offering their perspectives, followed by a community discussion.

Jump Down To: Budget Cuts Lead to Proposed Elimination | The Department's Response | Results | Looking Ahead


The Department of Geological Sciences at the University of Florida is about what you'd expect -- or perhaps better -- for a geoscience department at a major research university. They have 17 tenured or tenure track faculty; 4 non-tenured faculty members (all of whom have Ph.D.s), who are responsible for the department's research laboratories; and 2 lecturers. In addition, they have 5 affiliate professors at the Florida Museum of Natural History, whose students also earn degrees through the department. They are a collegial faculty, and most of them serve on high-profile faculty committees and editorial boards. They have state-of-the-art research facilities, including $2 million in research lab renovations in 2000. These internationally recognized geoscientists have earned the following awards and recognition:

The department currently has 44 graduate students, 30 of whom are pursuing Ph.D.s. At the undergraduate level, their general education classes are remarkably popular, with over one third of all undergraduate students enrolling in a Geology course during their years of study at the University of Florida.


During fiscal year 2007-2008, the University of Florida continued a history of budget cuts with another round, aiming for approximately 10% cuts across the board. In the fall of 2008, the College of Liberal Arts and Sciences hired a new dean, who had no previous experience as either a dean or a department chair. In fiscal year 2008-2009, the University was facing an additional 10% budget cut, prompting discussion of eliminating weak departments. The Dean decided to cut three departments: one each in humanities, social sciences, and natural sciences.

The Dean's reasoning was simple:

The Chair of the Department, Mike Perfit, attributes this proposal to two underlying problems: a fundamental lack of understanding and appreciation of the importance of the Geological Sciences on campus, and a new Dean with minimal previous interactions with science departments and little administrative experience.


The department's response to the proposed changes was immediate and broad-based, including faculty, colleagues, students, and alumni. (Editor's note: the department was able to reach their alumni immediately because they regularly send a departmental newsletter to their alums.) Here are the strategies they think have been most effective:


While the department is no longer slated for elimination, they do not see their future as guaranteed, either. To continue to strengthen their position within the institution, they plan the following changes: