TWQ is an easy to use, Windows-based program that allows you to calculate the position of phase equilibria in P-T, T-XCO2, and P-XCO2 space. You can also use it to calculate various activity diagrams. It is maintained by Rob Berman at the Geological Survey of Canada (GSC) and is available for free from the GSC website:

The underlying philosophy behind using TWQ over "classical" geothermobarometry calibrations published in the literature, is that it uses an internally consistent thermodynamic database (Berman, 1991) to calculate P's and T's. For example, if you combine the Ferry and Spear (1978) calibration of the garnet-biotite thermometer with the Ghent (1976) barometer, it is very much like comparing apples and oranges because the endmember (fundamental) thermodynamic data derived from these calibrations are different.

See Appendix II in the TWQ documentation (in the winTWQ folder) for a good overview of the thermodynamic principles and equations used by TWQ.

TWQ allows you to calculate the positions of reactions in P-T-X(composition) space involving pure and solid-solution phases including H2O and CO2. 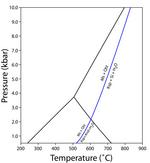 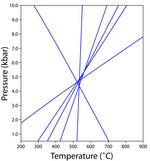 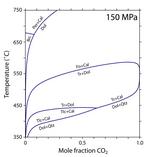 Ease of use is the strength of winTWQ. Following the tutorial below, new users can be up and calculating in a relatively short period of time. The primary drawback to winTWQ is that it only runs in Microsoft Windows. However, I run Windows on my Intel-based Mac using parallels and it works great. Another potential drawback is the number of phases in the Berman (2007) database is limited compared to Holland and Powell (1998); however, most of the common phases used in geothermobarometry are available.

The purpose of this tutorial is to walk new users through the basic use of winTWQ. By the end, you will be able to 1) calculate and plot the Al2SiO5 phase diagram, and 2) use mineral chemistry from Mt. Moosilauke, New Hampshire (Hodges and Spear, 1982) to calculate the positions of all the possible reactions for this sample in the KCFMASH system including the familiar garnet-biotite exchange reaction (Ferry and Spear, 1978) and GASP reaction (Ghent, 1976). 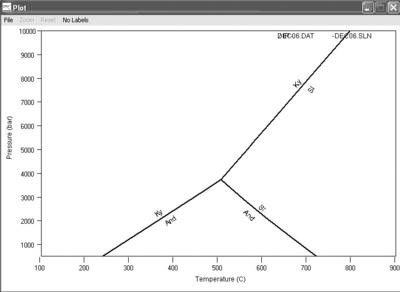 Figure 1. Al2SiO5 phase diagram with metastable extentions generated by winTWQ.
Postscript Output of Graphs. TWQ generates a plot.dxf file every time you run the program. This file can be opened in Adobe Illustrator.

Here we use TWQ to calculate the position of the garnet-biotite thermometer (Ferry and Spear, 1978) and the GASP barometer (Ghent, 1976). We will use mineral compositions reported by Hodges and Spear (1982) from Mt. Moosilauke, New Hampshire. The mineral assemblage of the sample is garnet + biotite + sillimanite + muscovite + plagioclase + quartz. 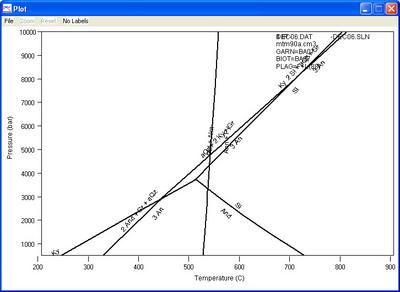 Using the Restart File and Calculating All Equilibria

Berman (1991) suggests that calculating all possible reactions, or some subset of reactions (Berman, 2007), can be used as a possible test for equilibrium. That is, if 1) all the minerals in a rock were at one time in equilibrium, and mineral compositions have not changed since that time, 2) the mineral compositions are perfectly known/measured, and 3) the thermodynamic data for all the minerals are correct, then all the possible reactions calculated of a given mineral assemblage should intersect at a single point. Of course, for real rocks and mineral databases, one or more of these assumptions is violated. Having said that, it is a useful exercise to go through, and easy to do in winTWQ.

The following assumes you completed the tutorial above "Using Mineral Compositions and Geothermobarometry". This allows us to use the Restart file. Using the Restart file is a quick method to rerun winTWQ if you don't plan to change the chemical system.

Ferry, J.M. and Spear, F.S. (1978) Experimental calibration of the partitioning of Fe and Mg between biotite and garnet. Contributions to Mineralogy and Petrology, 66, 113-117.