Thermobarometry is the quantitative determination of the temperature and pressure at which a metamorphic or igneous rock reached chemical equilibrium. The term "classical" thermobarometry refers to methods for calculating the P-T conditions of a specific chemical reaction.


Why do we need to know pressures and temperatures of petrologic events? 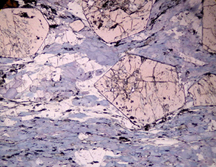 If you know the pressure (P) and temperature (T) at which an igneous or metamorphic rock equilibrated, you can determine a lot about where in the Earth the rock formed and how the rock formed. For example, some tectonic processes are associated with characteristic pressures and temperatures: e.g., low temperatures at high pressure occur only in subduction zones.

How do we determine (paleo) pressures and temperatures?


Mineral assemblages and textures may provide information about the conditions at which a rock equilibrated. In metamorphic rocks, we use qualitative terms such as low-grade, medium-grade, and high-grade (and even 'medium-low' or 'very high grade') to describe the approximate temperature conditions of metamorphism. These designations do not provide information about pressure, and are therefore not useful for describing subduction zone rocks.

Other methods for characterizing metamorphic conditions include:

(1) index minerals : characteristic minerals that provide an indication of the temperature (and, in some cases, pressure) conditions at which a rock formed (e.g., kyanite in metamorphosed shale; magmatic epidote in plutons and volcanic rocks). Not all rocks have a suitable bulk composition to produce index minerals. 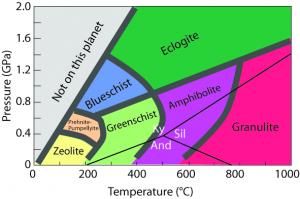 Some igneous assemblages are also characteristic of crystallization within particular ranges of temperature/pressure conditions.

To apply a thermometer or barometer (HTML File 7kB Mar31 07) to an equilibrium mineral assemblage, you need to know:

Solvus thermometry involves phases that form a solid solution at high-T but that 'unmix' into separate phases during cooling. The composition of coexisting minerals that have a solvus relationship is an indicator of temperature (Figure 3b), although in some cases this may be a temperature representing part of the cooling path of a rock. Examples: muscovite-paragonite; calcite-dolomite; orthopyroxene-clinopyroxene; feldspars.


Pressure-sensitive reactions (barometers) involve a significant volume change, such as the transformation of anorthite (Ca-plagioclase) to grossular (Ca-garnet) + kyanite + quartz. Many barometers are net transfer reactions, and have shallow slopes on P-T diagrams (Figure 3a). Other barometers involve the concentration of an element in a certain mineral in equilibrium with a particular assemblage (e.g., Al in hornblende, Si in phengite).


Uncertainties in thermobarometric calculations can be determined by propagating errors from all stages of the P-T determinations: the mineral composition analyses, the thermodynamic data, and the calibration method. Typical uncertainties are ± 50°C, ± 1 kbar.


Sources of error in thermobarometry


Common sources of error in thermobarometric calculations include:

What do calculated P-T conditions mean?


For igneous rocks, calculated pressures and temperatures likely represent the conditions at crystallization, particularly for rapidly cooled rocks. Metamorphic rocks have more complex thermal and pressure histories, but the most typical interpretation of thermobarometric results is that the calculated P and T represent the conditions at the thermal maximum (peak of metamorphism) (Figure 4). It is important to recognize that the thermal maximum may not represent the pressure maximum (Figure 4). Furthermore, it is important to examine the textures of a metamorphic rock and determine if the mineral assemblages/textures are consistent with the interpretation that peak metamorphic conditions are preserved and have not been overprinted during later events. 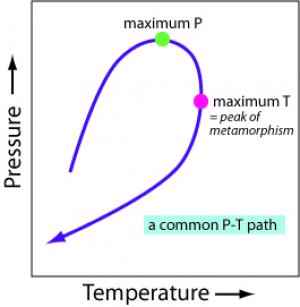 Figure 4. A common pressure-temperature path for regional metamorphism. The first stages of metamorphism involve burial and heating. Following the attainment of maximum pressure (depth), rocks -- which are poor conductors of heat and therefore are slow to heat relative to tectonic rates of burial -- may reach their maximum temperature conditions during the initial stages of decompression. Therefore, the peak of metamorphism (thermal maximum) may not coincide with the depth maximum.