The purpose of making calorimetric measurements on minerals and other substances is to obtain enthalpy information. The enthalpy values that are measured relate to the bond strengths in a substance and constitute one of several types of energy used to determine the stability conditions of geologic materials. With enthalpy and other information, one can make thermodynamic calculations that predict the conditions under which a mineral or mineral assemblage is stable. 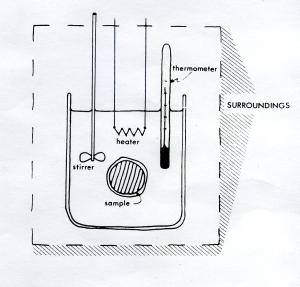 The schematic version of a HF solution calorimetric system is shown above. It consists of a sample that is isolated from the acid until the dissolution is to be performed. The thermometer measures the temperature of the system. The stirrer keeps the system in thermal equilibrium. Before a dissolution experiment is conducted, a known amount of electrical energy is introduced via the heater into the calorimetric system, and the associated temperature change is determined. This allows one to calculate the heat capacity of the system, normally expressed as energy/degree, and is a necessary step in order to relate energy to temperature change of the system. After the sample is released into the acid, the temperature change of the system is measured once again. Using the previously-determined heat capacity, one then determines the amount of energy produced by the dissolution. Knowing the weight of the sample that has been dissolved, one then converts this energy into a molar quantity expressed as energy/mole (e.g., kJ/mol). In cases where energy is expended in a dissolution (temperature of the calorimeter increases), energy is considered to be a negative quantity; in cases where energy is taken up by dissolution (temperature decreases), energy is considered to be a positive quantity.

Here is an example of how such a system is utilized. Suppose we could like to know the enthalpy difference between two forms of silica, quartz and tridymite. We would first perform a solution calorimetric experiment on quartz.

where the latter designates the enthalpy (or heat) of solution of quartz. In a separate experiment we would dissolve an equivalent amount of tridymite.

we would have obtained the same energy, but with the opposite sign = -Hsolution, tridymite

If the first and third reactions are combined,

(which simplifies to quartz ↔ tridymite)

the reaction is accompanied by a total energy change of: ΔHreaction = Hsolution, quartz - Hsolution, tridymite

In other words, the enthalpy change for the reaction is simply the difference between the first and second enthalpies of solution.

Note, it is important that the chemical composition of the acid be the same in experiments (1) and (2), otherwise the "solution (with dissolved SiO2)" does not cancel in (4) above.

When heats of solution are used to compute the enthalpy change of a reaction (ΔHreaction), the following holds

This is the opposite of the relationship when enthalpies of formation (Hformation; from the elements or oxides) are utilized for the same purpose

This is explained by the fact that a mineral is a reactant in a solution calorimetric experiment, whereas it is a product in an enthalpy of formation reaction.