Gibbs' Phase Rule: Where it all Begins

Minerals are the monitors of the physical and chemical conditions under which they formed. The occurrences of minerals, their parageneses (stable associations), types of reactions, and compositional variation (e.g. zoned minerals) all provide important information about geologic history and processes. Of particular importance to geologists are: 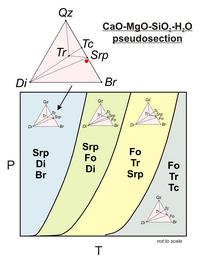 Gibbs' Phase Rule provides the theoretical foundation, based in thermodynamics, for characterizing the chemical state of a (geologic) system, and predicting the equilibrium relations of the phases (minerals, melts, liquids, vapors) present as a function of physical conditions such as pressure and temperature. Gibbs' Phase Rule also allows us to construct phase diagrams to represent and interpret phase equilibria in heterogeneous geologic systems. In the simplest understanding of phase diagrams, stable phase (mineral) assemblages are represented as "fields" (see colored areas on the figure to the right) in "P-T space", and the boundaries between stable phase assemblages are defined by lines (or curves) that represent reactions between the phase assemblages. The reaction curves actually represent the condition (or the locus of points in P-T space) where ΔGrxn =0; for more information on this point see Gibbs Free Energy. A solid understanding of Gibbs' Phase Rule is required to successfully master the applications of heterogeneous phase equilibria presented in this module.

Gibbs Phase Rule is expressed by the simple formulation:


P is the number of phases in the system
A phase is any physically separable material in the system. Every unique mineral is a phase (including polymorphs); igneous melts, liquids (aqueous solutions), and vapor are also considered unique phases. It is possible to have two or more phases in the same state of matter (e.g. solid mineral assemblages, immiscible silicate and sulfide melts, immiscible liquids such as water and hydrocarbons, etc.) Phases may either be pure compounds or mixtures such as solid or aqueous solutions--but they must "behave" as a coherent substance with fixed chemical and physical properties.
C is the minimum number of chemical components required to constitute all the phases in the system
For historical reasons, geologists normally define components in terms of the simple oxides (e.g. SiO2, Al2O3, CaO, etc.). If two possible components always occur in the same proportions in multiple phases in a system, these can be combined into a single component (remember, we are always trying to define the minimum number of components required to make all the phases in the system). Consider the reaction:

Normally we would pick the 4 components: CaO, MgO, SiO2, and CO2 based on the simple oxides. However, because Ca and Mg are in a 1:1 ratio in both dolomite and diopside (and not present in quartz or carbon dioxide), we can consider this a ternary system with components: CaMgO2, SiO2, and CO2

In some geologic systems it is convenient to define the components in terms of end-member compositions (e.g. binary systems such as carbonates, CaCO3 - MgCO3; alkali feldspars, NaAlSi3O8 - KAlSi3O8, etc.).

In some cases, a given mineral assemblage may be represented by a sub-set of the whole system if fewer components are needed to define the compositions of the observed mineral assemblage--this is known as a degenerate system. A good example of this can be seen on a ternary (3 component) chemographic projection if the phases of interest plot in a co-linear fashion (i.e. requiring only two components to define the phase compositions in what is otherwise a three component system).

A more complete discussion of components can be found in the section on Plotting Mineral Compositions and Chemographic Projections.
F is the number of degrees of freedom in the system (also referred to as the variance of the system).
For geologic applications, this generally refers to the number of variables (e.g. pressure and temperature) that can be independently changed without altering the state of the system (i.e. the number of phases and their compositions are constant). Three common types of equilibria are possible:

The integer in the Gibbs Phase Rule
is related to the number of intensive parameters (i.e. those that are independent of mass; such as pressure and temperature) that are being considered. Note that many phase diagrams consider only one intensive parameter (e.g. T-Xfluid, where T is intensive, and the mole fraction of fluid is related to the amount of mass of the fluid components); in this case, the Gibbs Phase Rule would be: P + F = C + 1.

It is generally the case that as the number of components increase, the variance of the system must also increase. Conversely, as the number of phases increase in the system, the variance of the system must correspondingly decrease. A corollary to Gibbs' Phase Rule is Goldschmidt's Mineralogical Phase Rule: for a given rock in equilibrium at a fixed P and T, the number of phases is less than or equal to the number of components. Geologic systems are really rather simple! This means that we have a reasonable expectation that we can successfully interpret the conditions of formation of rocks in their natural settings, and to model their behavior using the thermodynamic databases and programs presented at the end of this module. 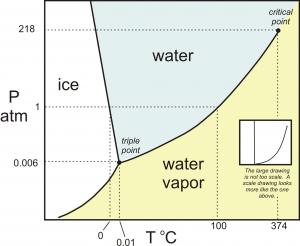 Phase diagram for the one component system H2O. This diagram is not to scale; a scale version looks like the thumbnail in the white box.

Now, let's consider a simple 1 component system that describes the mineral phases in the aluminosilicate system: 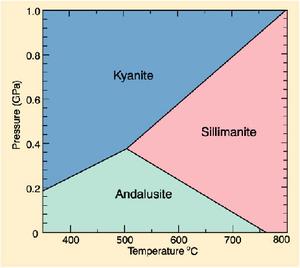 Phase diagram for the one component system Al2SiO5.
These principles extend to the more complicated binary, ternary and multi-component systems presented in the next section(s) of this module on Phase Diagrams and Pseudosections.

There are a number of important assumptions that must be considered when applying Gibbs' Phase Rule:

Derivation of the Phase Rule

It is important to recognize that the simple formulation of Gibbs' Phase Rule is derivative from fundamental thermodynamic principles. The Gibbs- Duhem equation establishes the relationship between the intensive parameters temperature (T) and pressure (P) and the chemical potential of all components (μi) in the system:
dG = Vdp - Sdt + ΣNidμi
This means that there are

In mathematical terms, the variance (F) is determined by the difference between (C+2) variables and (P) equations. Thus,

A more extensive derivation of the phase rule can be found at the website of W. R. Salzman, Department of Chemistry, University of Arizona or this PowerPoint presentation on the derivation of the Phase Rule (PowerPoint PRIVATE FILE 337kB Sep18 07) by Marty Rutstein, SUNY New Paltz.

Examples of the use of Gibbs' Phase Rule in creating and interpreting more complex phase diagrams are presented in the next section.