Examples of phase diagrams and reactions in jpg, pdf and animated-pdf format are available.
A 5 page summary (Acrobat (PDF) PRIVATE FILE 158kB Aug1 07) of this information is available, which can be used as a class handout.

Reactions among solid and fluid phases can be categorized in several different ways, based on what the reaction does, how the reaction progresses, or based on the nature of phases involved.

Categorization based on reaction effect

Categorization based on reaction progress

Categorization based on phases involved 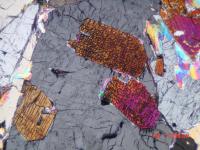 Hide
Kyanite inclusions (three tabular grains showing good cleavage and brown-pink interference colors) in andalusite (dark gray interference color, poorly developed cleavage) in a kyanite-andalusite-sillimanite (+ staurolite) quartz vein. This rock was "caught in the act" as kyanite reacted to form andalusite. The photo is from Donna Whitney. This sample is from Hamadan, Iran, and is discussed by Sepahi et al. (2004, J. Metam. Geology 22, 119-134). 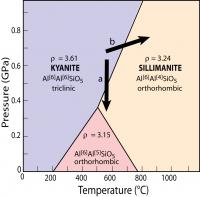 Hide
Phase diagram for the Al2SiO5 polymorphs. The arrows show that kyanite will react to form sillimanite with increasing temperature or with decreasing pressure. Although not labeled, the pink triangular field at the bottom is the stability field for andalusite. This figure is from Donna Whitney.


Most solid-solid reactions plot on a P-T diagram as essentially straight lines. This is because the ΔS and ΔV of reaction do not change much with varying pressure or temperature. To the extent that ΔS and ΔV do change with P and T, they change about the same amount for both the reactants and the products. (See the page on the Clapeyron Equation) for more discussion. 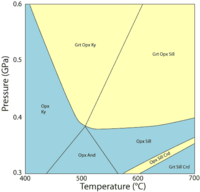 P-T projection with the position of the Grt-in reaction (curved line between the yellow and blue fields) shown in the FeO-MgO-A2O3 ternary animation.

FeO-MgO-Al2O3 diagram projected from quartz. Note that this is not the normal AFM diagram. Click for animated GIF showing variation in modes with temperature. QuickTime version ( PRIVATE FILE 103kB Apr2 07)
Many solid-solid reactions are continuous because they involve phases whose compositions are changing as their modes change. This occurs because the phases contain appreciable solid solution. Specific reactions are difficult to express, but schematically, one would be:
kyanite + orthopyroxene1 = orthopyroxene2 + garnet

This reaction is shown on the P-T diagram (left) and in the Al2O3-FeO-MgO diagram (right). The P-T diagram is a projection -- garnet and orthopyroxene compositions change along the reaction curve.