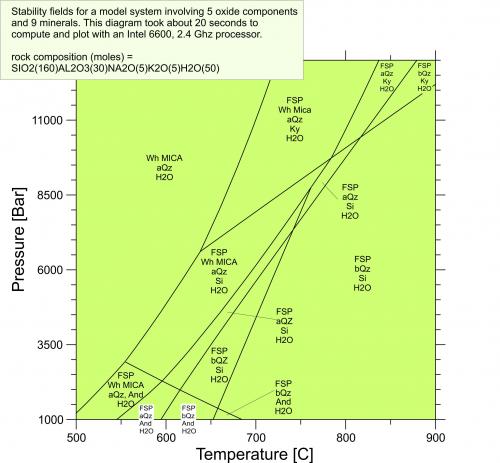 Fig 1. Equilbrium phase diagram calculated by Theriak-Domino. Unlike a conventional phase diagram, in this kind of diagram the stability fields of assemblages are labeled instead of the reaction lines.
The THERIAK-DOMINO software is a program collection written by Christian de Capitani (Mineralogy and Petrology Institute, University of Basel, Switzerland) -- see key references at the bottom of this page.


The Theriak-Domino routines are best known for their ability to calculate and plot equilibrium phase diagrams (also known as pseudosections). Theriak, the heart of the collection, calculates the stable mineral assemblage and equilibrium phase compositions for a given rock (bulk composition) at specified P, T conditions. Domino is the key program for plotting diagrams. Additional programs calculate thermodynamic functions, (pseudo)binary or (pseudo)ternary phase diagrams, equilibrium phase compositional isopleths, and density, volume or modal equilibrium distributions. The programs, including source code (Fortran 77), are available for both Mac and Windows. Konstantin Petrakakis (Department of Geological Sciences, University of Vienna, Austria) maintains the Windows version.

Hints to get going

The software can be dowloaded for free (link below) and can be installed and running in well under an hour. The many files and folders can be confusing, especially for students unfamiliar with computer programming. To install efficiently and keep things as simple as possible, you may wish to follow the installation and set up suggestions given here (Acrobat (PDF) 113kB Jun21 11). (Alternatively, just follow the instructions that you will get when you downlaod the software.) I also have include several worked examples with explanations of input and output.


Link to Theriak-Domino website: for downloading the programs and getting general information


Since the early 20th century, and seminal works by Goldschmidt and others, petrologists have known that the stability of minerals, and of mineral assemblages, may be evaluated by applying the principles of thermodynamics to natural systems. Goldschmidt demonstrated that, given the necessary thermodynamic data, it is possible to calculate phase diagrams showing where assemblage-limiting reactions occur in PT, TX, or PX space. For a long time, unfortunately, the requisite data were unavailable, and so experimentalists studied model systems and determined phase diagrams through painstaking experimentation.

Mineral and mineral-assemblage stability, however, depend on rock composition as well as on thermodynamics. So, beginning in the 1990's, petrologists revised or rewrote computer programs to take bulk composition into effect. For a given rock composition, at specified PT conditions, the programs calculate the equilibrium compositions of coexisting minerals and the relative amounts of each that will be present. The programs produce diagrams, sometimes termed pseudosections or equilibrium phase diagrams that look like phase diagrams but that are different. Phase diagrams show all reactions in a model system that could take place; equilibrium phase diagrams show stable mineral assemblages. The difference is that some reactions that appear on phase diagrams will not affect a rock of the wrong composition. For example, a reaction that involves forsterite will not affect a rock that contains no forsterite in the first place.

The Theriak-Domino package of de Capitani and coworkers is one of the more popular programs for calculating equilibrium phase diagrams, primarily because of ease of use. Other routines that serve the same purpose include: THERMOCALC (Powell et al. 1998; Powell and Holland 1994), Perplex (Connolly 1990), and Gibbs (Spear et al. 2001).

The Theriak-Domino routines can be used for a variety of purposes. Figure 1 (above) shows a classic equilibrium phase diagram (pseudosection) generated by Domino. The diagram shows stability fields for different mineral assemblages, for a specific model compositional system. 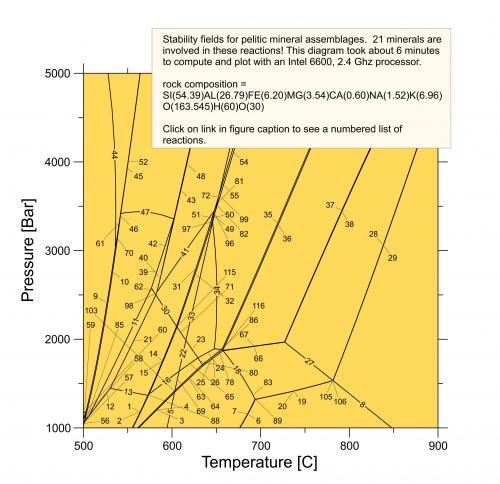 Fig 2. Equilibrium phase diagram for a pelitic composition calculated by Theriak-Domino. More than20 mineral and fluid phases are involved in these reaction. Domino creates a separate list of reactions (Acrobat (PDF) 9kB Jun15 11) when the diagram is too crowded for labels.

Figure 2 (left) shows a more complicated example, generated by Domino, involving a natural pelite composition and more than 20 phases. Fields are unlabeled, due to crowding, but Domino generates a complete list of reactions (Acrobat (PDF) 9kB Jun15 11) for reference.

Other, less conventional kinds of calculations that can be made using Theriak-Domino are shown in Figures 3 and 4 (from Perkins and Anthony, 2011; the data to make these figures came from Theriak but drafting was done using another program): 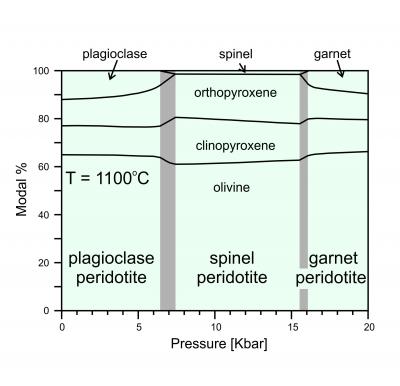 Fig 3. the affect of pressure on mineral modes for a natural garnet peridotite composition. The calculations involved 7 oxide components and many possible phases (but only 6 turned out to be stable). This figure demonstrates one kind of calculation that can be made using Theriak. 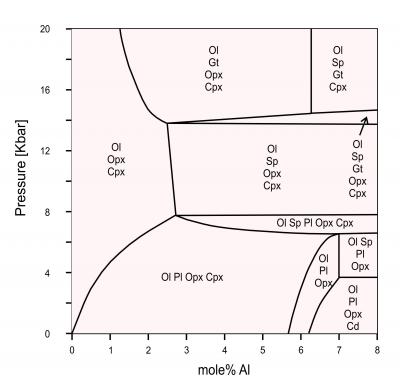 Fig 4. This is another diagram generated using Theriak, showing the affect of Al on the stability of different peridotite assemblages at 1,100 oC. It involves the same components and phases as Figure 3, except that a small stability field for cordierite is present..


Theriak-Domino has lots of things going for it. It is easy to obtain and install. Once installed, it is quite easy to figure out how to do a number of different kinds of calculations. (The users' guide is quite good.) It is more intuitive and easier to use than some other similar computer packages.

The primary drawbacks are the same as for other, similar programs. (1) The accuracy of results depends on the accuracy of the database. And, there are still some questions about the thermodynamic properties of some minerals and, especially, of some mineral solutions. (2) Complicated calculations involving many components and phases may take a long time (>30 minutes) to complete.

For some information about setting up the programs, and worked examples to help clarify some of the input and output, click here (Acrobat (PDF) 113kB Jun21 11).

Start here! This is amost excellent set of presentations that provide clear and concise instructions with worked examples.

Perkins, D. and Anthony, E.Y. (2011) The evolution of spinel lherzolite xenoliths and the nature of the mantle at Kilbourne Hole, New Mexico. Contributions to Mineralogy and Petrology, in press.