Written by Carol Ormand, based on ideas compiled from the 2005 workshop on Developing Pathways to Strong Departments of the Future and the 2007 workshop on Strategies for Successful Recruitment of Geoscience Majors. 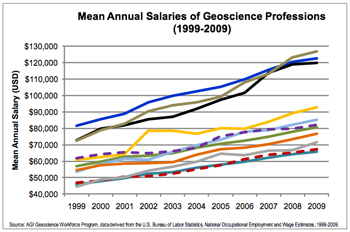 ×
Today's students (and their parents) are highly motivated by practical considerations: Will they be able to get a job with their degree? How well will it pay? (See the AGI summary of 2013 median salaries in the Geosciences and their 2007 report on starting salaries in the Geosciences to find out.) Will it be satisfying? By informing your students about the full range of career opportunities in the geosciences, you will improve your chances of recruiting majors (e.g. Marketing Earth Science Education, 2002 ( This site may be offline. ) , Hoisch and Bowie, 2010). Here are several ways to do that, with examples from various geoscience departments.
Jump Down To Presentations in Introductory Courses | Promotional Videos | Salary Data | Alumni Networks | Speaker Series | Additional Resources | References

One of the recommendations from the October 2007 workshop on Strategies for Successful Recruitment of Geoscience Majors was the active, intentional use of introductory geoscience classes. Several participants spoke of the effectiveness of making a presentation about opportunities within the department's geoscience programs and about career opportunities in geoscience during each introductory course. Below are some examples of such presentations. 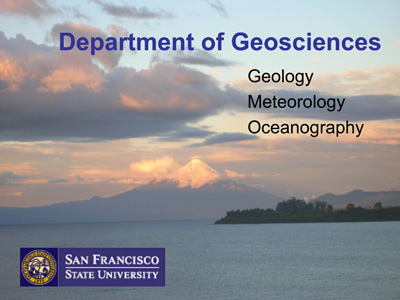 This presentation (Acrobat (PDF) 2.4MB Dec6 07) shows geoscientists at work in a wide variety of settings, provides salary information, lists some of the primary skills developed in a geoscience program, and describes many of the career opportunities available to students who successfully complete each of the department's degree programs. 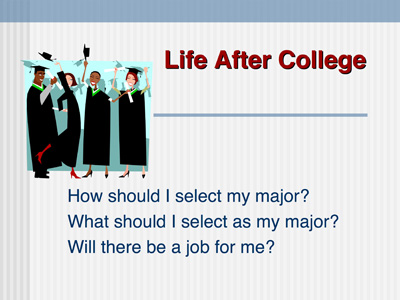 This presentation (Acrobat (PDF) 4MB Dec6 07) focuses on the process of choosing a major and on the wide variety of career opportunities available to people with degrees in geology and geography, including some salary information. It also presents many examples of prominent people with degrees in the geosciences. Finally, it describes why geoscience degrees will be increasingly valuable in the future.

Some organizations have produced promotional videos, describing career opportunities in the Earth Sciences. You can show them in your classes or direct interested students to them.

The earth sciences are central to all aspects of life. Get a quick glimpse of how in this 6 minute video from AGI.

Learn about careers, education, and research in water and environmental engineering from diverse undergraduate and graduate students. See what excites them about their future careers. Learn about what engineers do; observe first hand research projects on cleaning up wastewater and oil spills.

Many students (and their parents) are concerned about being able to earn a living with their college degree. Data on geoscience salaries can be persuasive.

from the American Geosciences Institute, July 2009. The percent change of mean annual salaries is also graphed by subdiscipline, and the rates of increase over the past decade are impressive.

A recommendation that arose from the January 2007 workshop on The Role of Departments in Preparing Future Geoscience Professionals was to keep track of your department's alumni, so that you can give specific examples of what students have done with degrees from your program. (If you publish a department newsletter, sent to all of your alumni, your alums will have additional incentive to keep you informed of their whereabouts.)

The Carleton College Geology department maintains a webpage of links to alumni webpages, arranged chronologically by year of graduation. One particularly nice aspect of this list is that it includes many people who have chosen careers outside of geology.

The Earth and Oceanographic Science department at Bowdoin College also lists where their recent alumni are now ( This site may be offline. ) and includes a wide variety of occupations.

The UND Department of Geology and Geological Engineering has an online alumni occupation database based on information its alums have supplied via an online form.

Many geoscience departments have a visiting speaker series; incorporating some talks specifically about geoscience careers is an easy, effective way to promote this information. Your alumni can be an excellent resource for such talks.

Several participants in the January 2007 workshop on The Role of Departments in Preparing Future Geoscience Professionals mentioned that Homecoming Week is a good time to invite your alumni to give talks (or be part of an alumni panel), as they may already be planning a trip to campus. 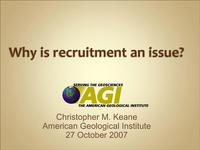