High quality science education is essential to our nation's future. Jobs are available in the geosciences, and geoscientists report a high level of job satisfaction. We can attract top students to the geosciences by providing them with the information they seek about career options. One of the best ways for departments to do that is to maintain a record of where their graduates go to work.

This presentation, by Roman Czujko, from the Statistical Research Center at the American Institute of Physics, was given at the January 2007 workshop on the Role of Departments in Preparing Future Geoscience Professionals. You can also download the original presentation. (PowerPoint PRIVATE FILE 222kB Jan11 07) Data used in this presentation come from the American Meteorological Society, American Institute of Physics, American Geophysical Union, American Geological Institute, National Science Foundation, and the United States Department of Education. 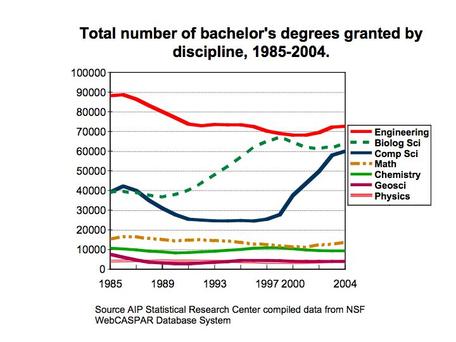 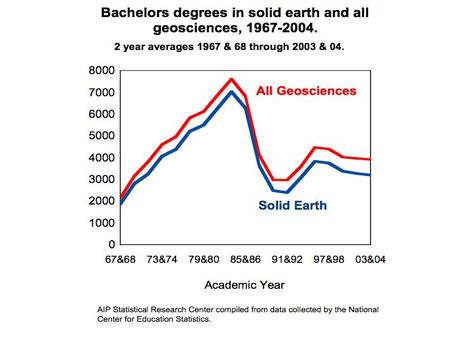 Considered in more detail, the number of Bachelor's degrees granted in the geosciences has fluctuated significantly, rising through the 1970's and early 1980's, falling through most of the 1980's, and beginning to rise again in the early 1990's. 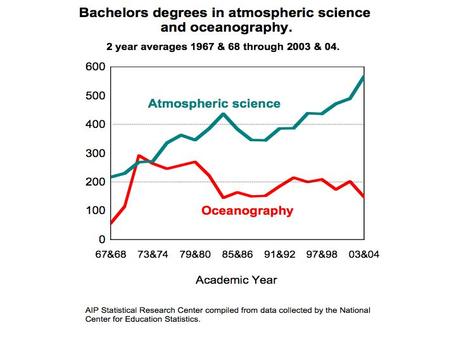 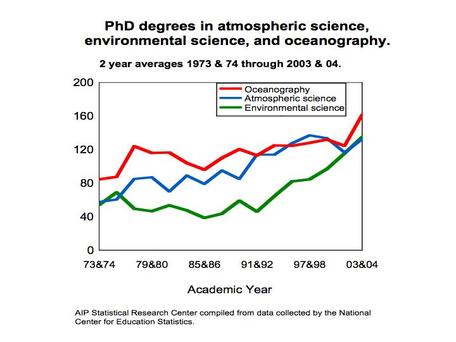 The number of PhD's granted in the atmospheric, environmental, and ocean sciences over a similar time span shows an irregular but increasing trend. Each of these sciences has a slightly different history of growth. 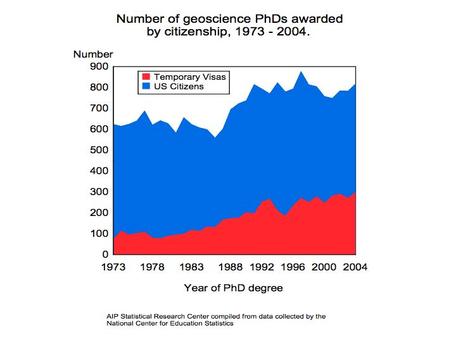 On average, the increase in number of PhD's granted in the geosciences over the past three decades can be attributed directly to the increase in international PhD students. 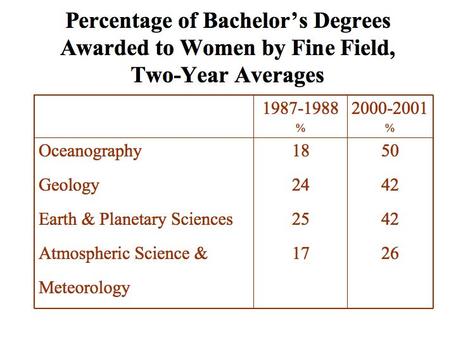 From the late 1980's to the early 00's, the percentage of Bachelor's degrees earned by women in the geosciences has increased dramatically, though it has not yet reached 50% overall. 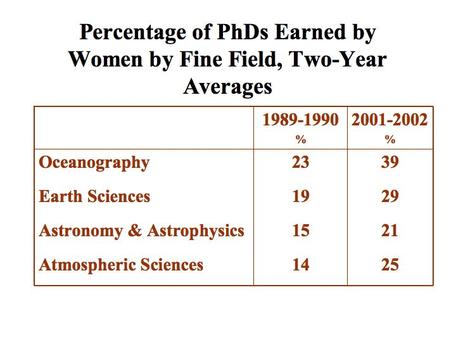 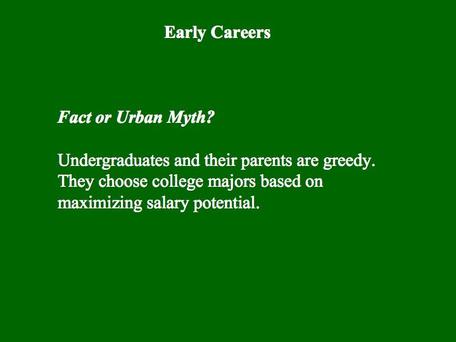 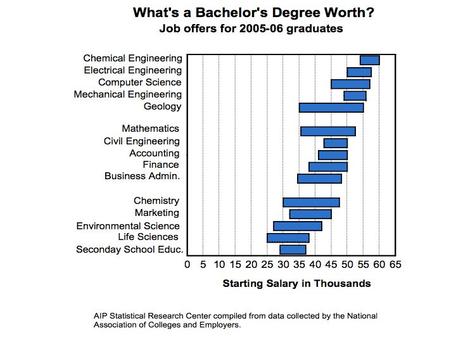 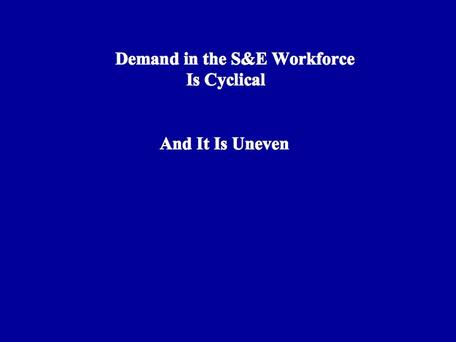 However, demand for employees in the science and engineering workforce is both cyclical and uneven. So, there are times in every decade when even the best graduates struggle to find the kind of job they want, and there are times when graduates have several job offers from which to choose. The only guarantee, when a student begins a science degree program, is that the demand will be cyclical. Communicating the cyclical nature of the geoscience job market to students and their parents is one of our challenges. 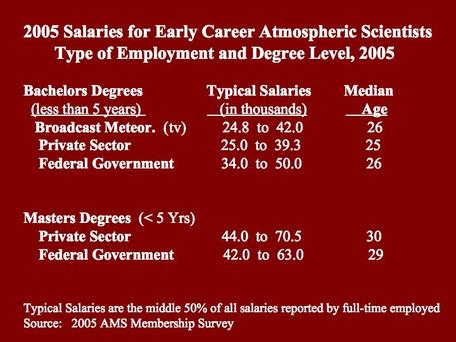 More specifically, here are some examples of what graduates in atmospheric sciences can do with their Bachelor's and Master's degrees, and what they can expect to earn for that work. 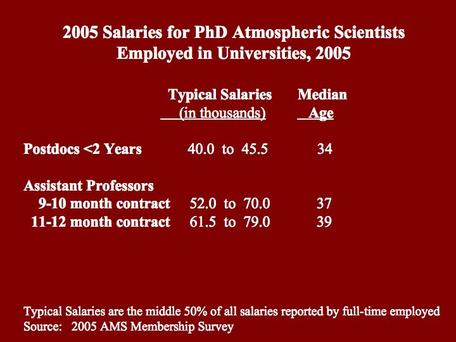 Here are some data for PhD's in the atmospheric sciences. 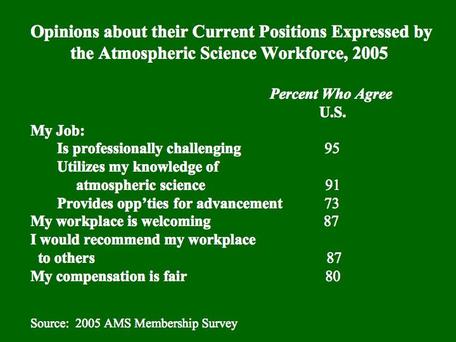 Although salaries among atmospheric scientists are not particularly high, they do report a very high level of job satisfaction in many categories. 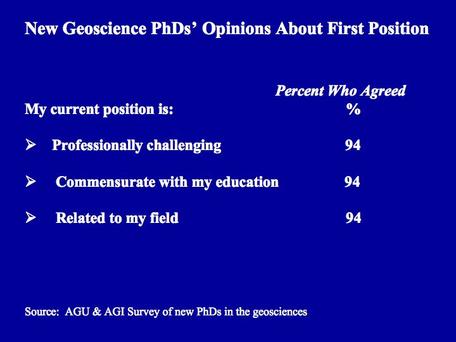 An overwhelming 94% of new PhD's in the geosciences report that their first jobs are professionally challenging, commensurate with their education, and related to their field of study. 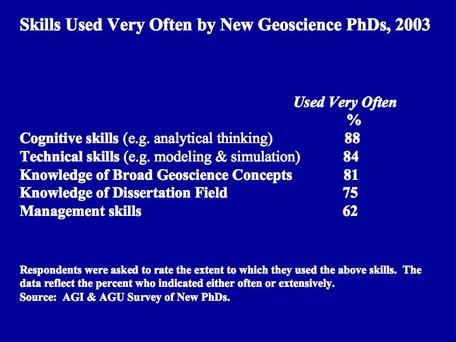 New PhD's in the geosciences also report that they use the skills they've developed in their PhD programs very often. 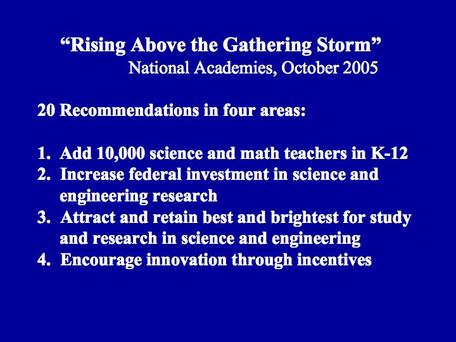 In 2005, the National Academies Press published a report called Rising Above the Gathering Storm: Energizing and Employing America for a Brighter Economic Future. The report details the authors' recommendations for what the U.S. needs to do to maintain our competitive edge in the global market in science and technology. As advanced scientific knowledge becomes more common, our leadership in these fields is at risk. 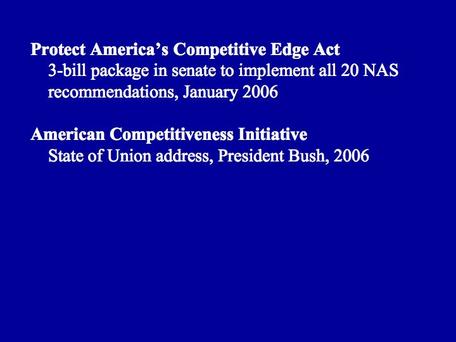 A few months later, the U.S. Senate responded by passing the Protect America's Competitive Edge Act, and President Bush referred to the American Competititveness Initiative in his State of the Union Address. 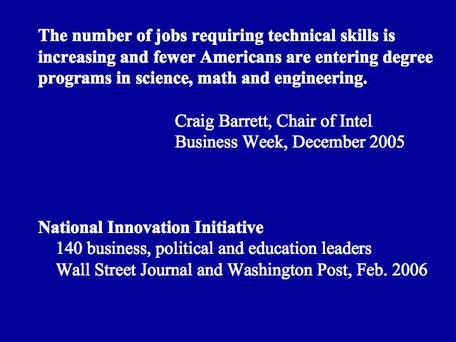 The effects of these recent actions remains to be seen. At the moment, while the number of jobs requiring technical skills is increasing, fewer Americans are entering degree programs in science, technology, engineering, and mathematics. So some leaders in business, politics, and education have taken steps of their own, forming the National Innovation Initiative. 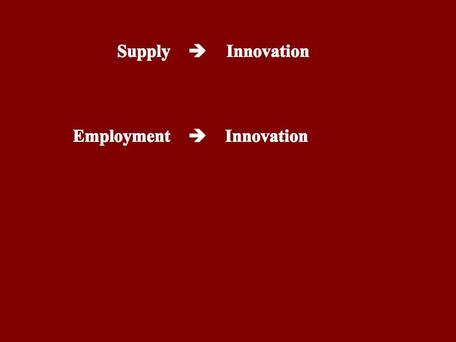 According to the National Innovation Initiative, "Innovation fosters the new ideas, technologies, and processes that lead to better jobs, higher wages and a higher standard of living. For advanced industrial nations no longer able to compete on cost, the capacity to innovate is the most critical element in sustaining competitiveness." If they're right, then we must find ways to create the conditions that favor innovation.

What Departments Can Do 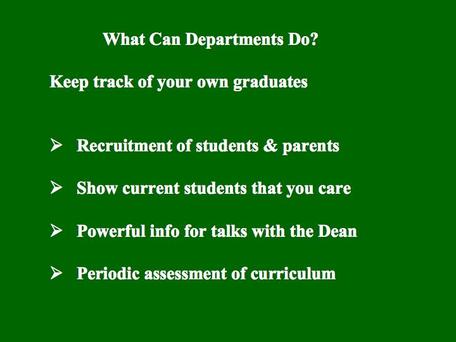 We can attract top students to the geosciences by providing them with the information they seek about career options. One way for your department to do that is to maintain a record of where your graduates go to work. This also shows current students that you care what happens to them after they graduate, gives you powerful data you can use in discussing the value of your program with your school administration, and provides you with one means of conducting an internal assessment of your program. 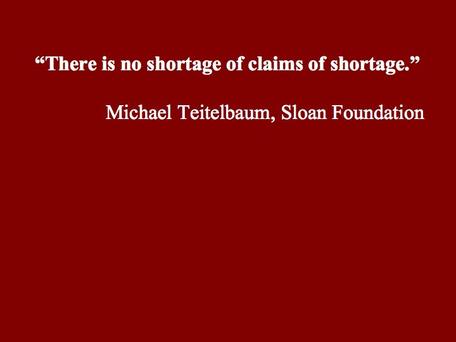