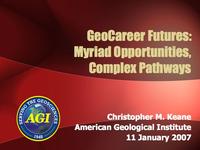 In the coming decade, demand for trained geoscientists, particularly in the private sector, is projected to exceed supply by a significant margin. Yet students in geoscience programs express lower interest in such jobs than might be expected. In addition, geoscience employers have a number of concerns about the hiring pool. Geoscience departments can improve their students' chances of gaining employment by addressing these concerns.

This presentation, by Christopher Keane, Acting Executive Director of the American Geological Institute, was given at the January 2007 workshop on the Role of Departments in Preparing Future Geoscience Professionals. You can also download the original presentation. (PowerPoint PRIVATE FILE 458kB Jan11 07) 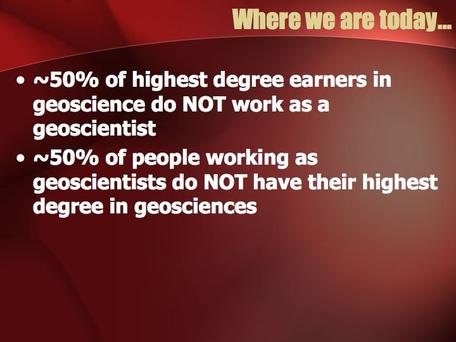 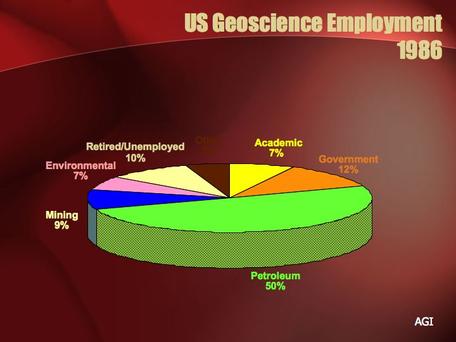 Employment within the geosciences has been shifting over the past couple of decades. In 1986, the petroleum industry employed half of the geoscience workforce. 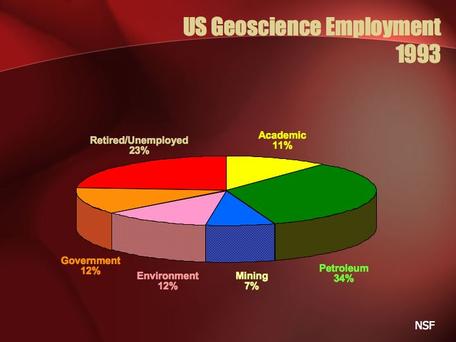 In 1993, the petroleum industry employed only about a third of the geoscience workforce, and nearly a quarter of geoscientists were unemployed or retired. 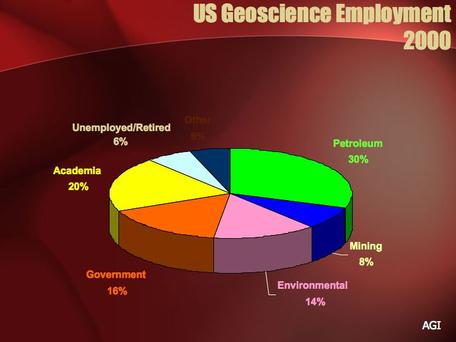 By 2000, the number of retired or unemployed geoscientists had dropped, but the petroleum industry continued to shrink. Academia and, to some extent, government and the environmental industry grew to fill the gap. 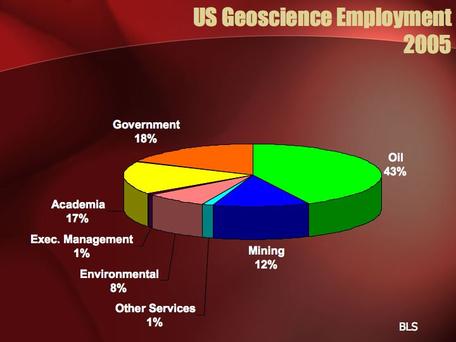 In 2005, the petroleum industry had rebounded, with government and academia being the next largest employers of geoscientists. 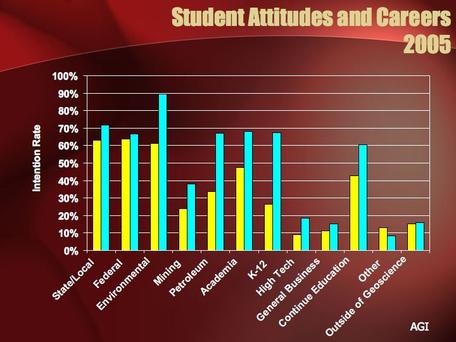 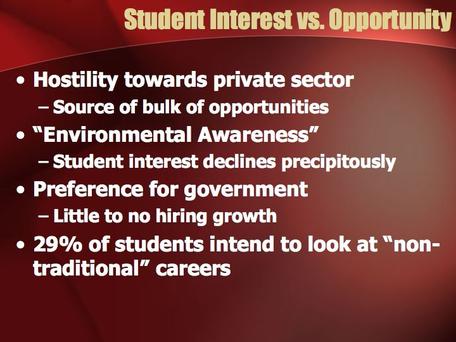 In particular, while the majority of available jobs are in the petroleum, environmental, and mining industries, students are consistently less interested in those opportunities. At the same time, students show very strong interest in government jobs, where there is little to no hiring growth. 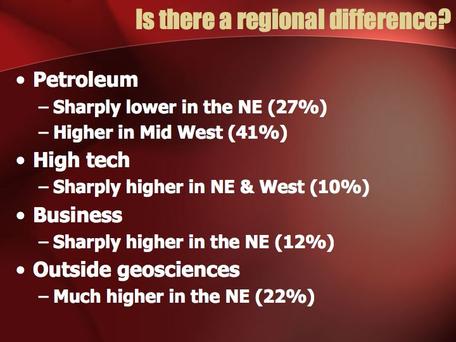 There are also some regional differences in student attitudes toward various career options. 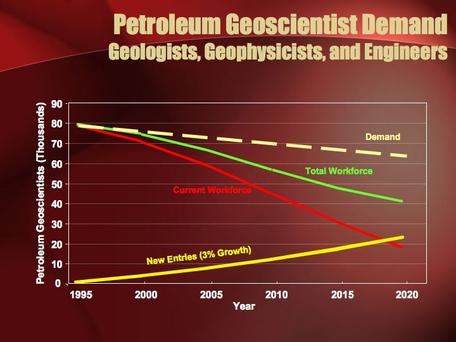 In the petroleum industry, the demand for geoscientists is projected to exceed supply as the workforce shrinks faster than the industry will. 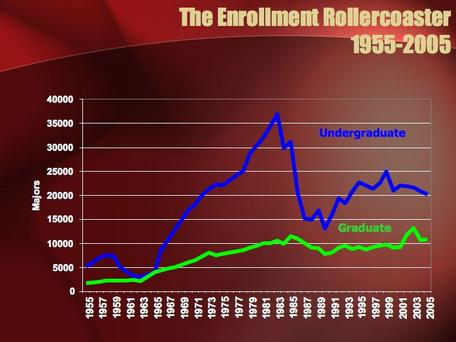 Geoscience enrollments have varied greatly over recent decades, growing throughout the 1960's and 70's, shrinking during the 1980's, and (on average) growing again since the early 1990's. 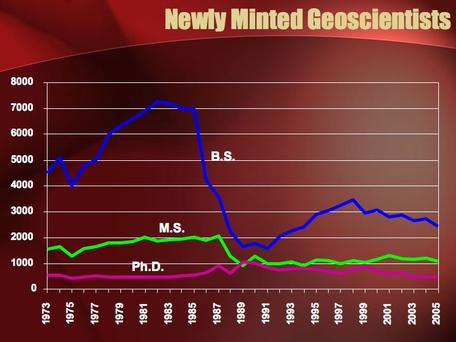 As you might expect, the number of degrees granted in geoscience in general parallels those enrollments. 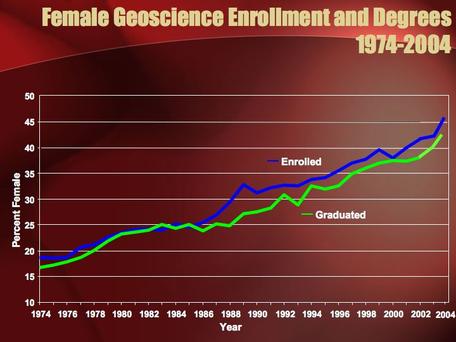 Over the last three decades, the percentage of female students (and graduates) has grown steadily, from less than 20% to more than 40% of all geoscience students. 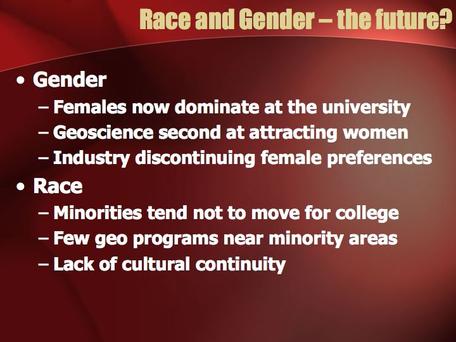 Over the same time span, the number of female college and university students has also grown, so that women now outnumber men. Within the STEM fields (science, technology, engineering and mathematics), the geosciences now attract the second highest proportion of female students, after biology. When it comes to racial diversity, however, the geosciences still lag behind. This may be due, in part, to the lack of geoscience programs at colleges and universities that serve large minority populations. It may also be due to the lack of role models within the geosciences. 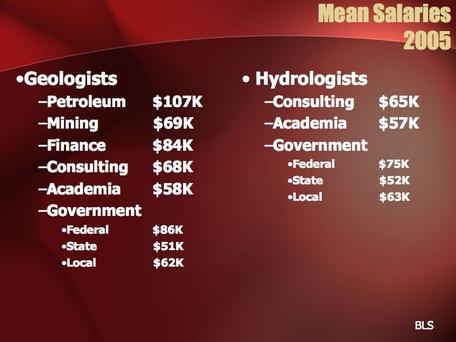 Average annual salaries for geoscientists range from about $50,000 to over $100,000, depending on employment sector. 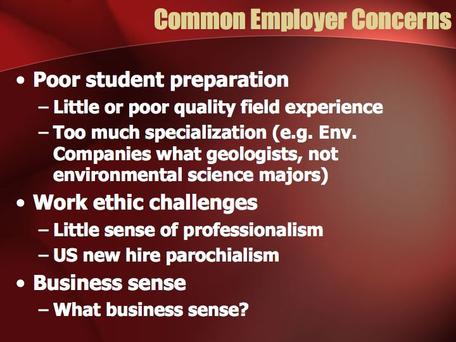 Geoscience employers express a number of concerns about the hiring pool. These concerns range from poor student preparation to a lack of work ethic and business sense, particularly among job candidates born and raised in the U.S. While these characteristics are clearly of concern for employers, they may be considered to be good news for a well-prepared job candidate with a strong work ethic and some business sense. Such a candidate stands out from the competition. 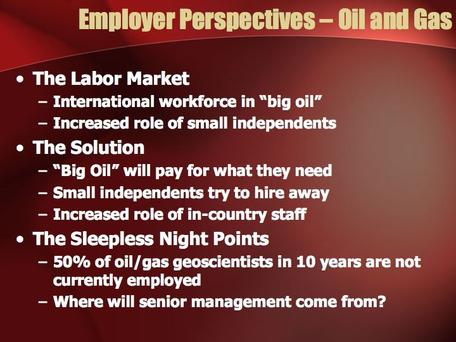 Within the petroleum industry, big oil companies are becoming more and more globalized, including hiring more workers from countries that are their bases of operation. That means fewer jobs are going to U.S. citizens, who tend to be reluctant to move overseas.

Perhaps more importantly, a significant portion of petroleum industry employees are within a decade of retirement, and will need to be replaced in the coming years. Projections indicate that half of the employees who will be working in the petroleum industry ten years from now are not yet working in the industry -- which begs the question of where senior management will come from. 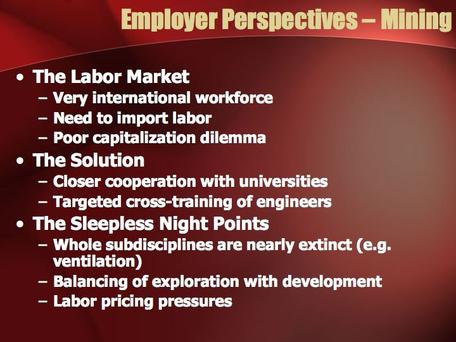 Within the mining industry, the globalization of the workforce has made it necessary to import labor. One solution has been to cross-train engineers with some related expertise. However, the cost of qualified labor makes it quite difficult to keep mining profitable. So does the cost of exploration -- but the future of the industry depends on today's exploration. On top of all that, colleges and universities are no longer teaching some important mining-related concepts, and knowledge is lost as experienced employees retire. 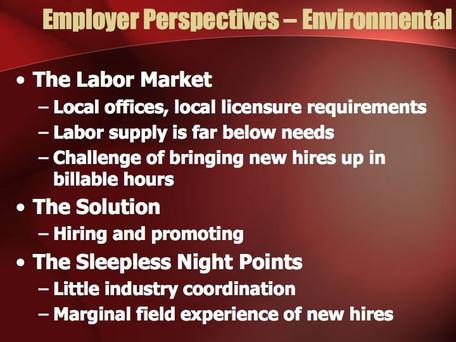 In contrast to the petroleum and mining industries, the environmental industry tends to hire almost exclusively from the local population. In general, qualified labor supply is far below the demand. This increases the challenge of training new hires, where a company's profit margin depends on its billable hours. Taking the extra time to get an employee up to speed costs money. 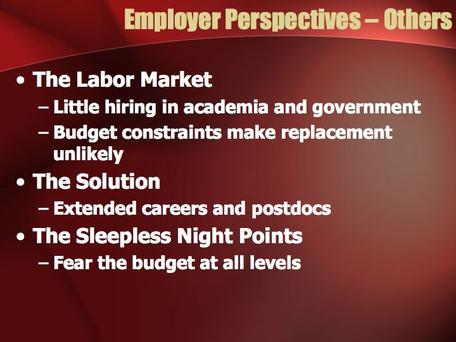 In both academia and government, the hiring rate for geoscientists is quite low. One of the results is an increase in postdoc positions. Students considering careers in these sectors should be aware that budgets are tight and are, for the most part, subject to the whims of politicians. 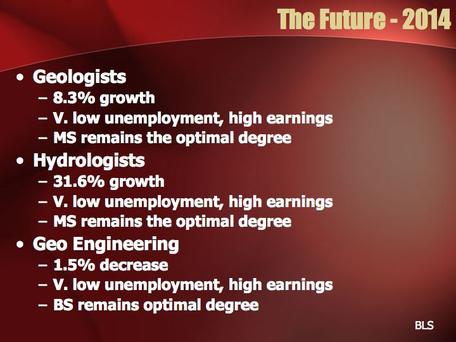 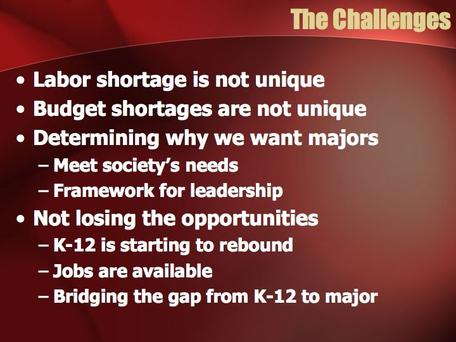 The projected workforce shortage for the geosciences and the quality of jobs that will be available in the coming years are good news for prospective majors. Our job is to get that information to students who might be interested, so that they can make informed career choices. 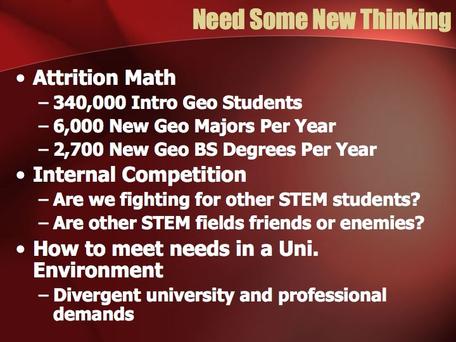 Each year, while 340,000 students take an introductory geoscience course and 6,000 decide to major in the geosciences, only 2,700 students earn their B.S. degrees in geoscience. Those who do earn their degrees are not always prepared for the geoscience careers they pursue. Geoscience departments may need to make some changes to address these issues.