About the Pine Ridge Reservation 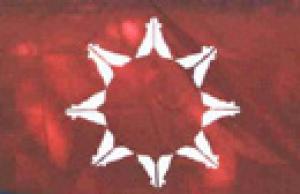 The Pine Ridge Reservation in southwestern South Dakota, home of the Oglala band of Lakota Sioux, initially contained over 60,000,000 acres as part of the Great Sioux Reservation that was established by the Fort Laramie Treaty in 1868. The reservation has been significantly reduced in size as the U.S. government illegally opened the land to homesteading in 1876, gold mining in the Black Hills during the Gold Rush(~1876), and in response to the Dawes Act (1889) which broke up the Great Sioux Reservation into 5 smaller reservations--the Pine Ridge Reservation is one of these. Today the reservation occupies ~2,800,000 acres (11,000 square miles-the size of Connecticut).

Treaty violations and the government's pursuit of tribal land once economically viable natural resources were discovered led to the battle at Wounded Knee in 1890, the American Indian Movement's (AIM) armed occupation of Wounded Knee, government enforced militarism on the reservation, and the conviction of Leonard Peltier for the murder of two FBI agents (Matthiessen, 1991 ). 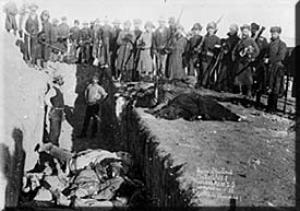 Burial of the dead at Wounded Knee in 1890. Details

Resources about the 1890 battle at Wounded Knee

Show resources about the battle at Wounded Knee