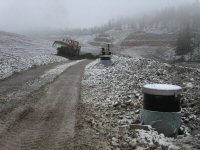 The many and varied repercussions from gold mining on the Pine Ridge reservation have proved to be devastating. The impacts faced by the displaced Lakota people are severe, resulting from infringement on their land, resources, and ultimately their way of life. The reservation hosts some of the richest land in the country, yet is home to the poorest people.

Over a century of resource exploitation, broken treaties and discrimination have resulted in environmental degradation of the lands, with severe consequences to the health and well-being of the Lakota Sioux people. The environmental impacts of gold mining are yet to be fully discovered. However, the immediate impact affecting the terrain are apparent. The natural ecosystem was altered as the sacred ground of the Lakota people was desecrated (Defenders of the Black Hills (more info) ).

The average income on the Pine Ridge reservation is well below poverty level: $2,600 per year. The high school drop-out rate is 70%. The rate of infant mortality is 300 times that of the national average, the diabetes rate is 800 times the average, and the cervical cancer rate is 500 times the average. Alcoholism inflicts 80% of people on the reservation. The majority of housing is significantly sub-standard with inadequate water, sewage, heating, and insulation. On average, 17 people share a home. The life expectancy is 48 years for men and 52 for women, which is the second only to Haiti in communities in the Western hemisphere (Lakota: The Forgotten People of Pine Ridge (more info) ).

Treaties provided by the Indian Health Serice (IHS) were intended to compensate for the land taken from the Native Americans. However, funding has proven inadequate. The service allocates $2,000 to each Native American per year. Last year, Congress rejected a budget increase in order to redirect funding to the war on Iraq (On Pine Ridge, a String of Broken Promises (more info) ).

Hide
Lakota environmentalist JoAnn Tall, who has worked with Pine Ridge and Rosebud Reservations to raise awareness about the environmental impacts on reservations by the government and corporations. Her work has halted nuclear testing in the Black Hills. Details

Resources about Environmental Impacts at Pine Ridge from Gold Mining