Geology and Physiography of Devil's Tower

Devil's Tower, deemed the first national monument by Theodore Roosevelt in 1906, is an igneous intrusion which rises 1,267 feet above the surrounding area. The redness of the rocks is due to the oxidization of minerals (Devil's Tower National Monument (more info) ). The region around the tower is composed of the Spearfish, Gypsum Spring and Sundance formations (Field Notes (more info) ).

Although Devil's Tower has long been a prominent landmark in northeastern Wyoming, the origin of the mammoth rock obelisk remains somewhat obscure. Geologists agree that Devil's Tower formed from molten rock forced upwards from deep within the earth. Debate continues, however, as to whether the rock cooled underground or whether Devil's Tower magma reached the surface. Current research supports the conclusion that Devil's Tower was not a volcano, but was injected between sedimentary rock layers and cooled underground. The characteristic furrowed columns are the result of contraction which occurred during the cooling of the magma. Geologic estimates have placed the age of Devil's Tower at greater than 50 million years, although it is likely that erosion uncovered the rock formations only one or two million years ago (Field Notes (more info) ). 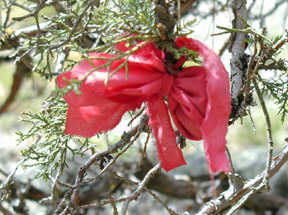 Resources about the Geology of Devil's Tower

Show resources about the Geology of Devil's Tower