Exploration and Development History on the Pine Ridge Reservation

The exploration of the Black Hills began with the Gold Rush and concluded with the US government's attempt to purchase the Native American's land after which it had been exploited.

In 1874 General George A. Custer and his 7th Cavalry violated the Fort Laramie treaty of 1868. Soon after, they discovered the gold rich Black Hills. The government proceeded to purchase reservation land, which was met with the Native Americans stark refusal. The ensuing battles began with the Battle of the Little Bighorn on June 15, 1876 at Greasy Grass, Montana. The Native American's victory was only short term as they were next confronted with the Sell or Starve Bill, the Allotment Act of 1888, and the Act of 1889. The government relinquished their plan to buy the land and opted to acquire their land by way of moving the Native Americans onto reservations. The 7th cavalry finalized their mission for gold acquisition with the Wounded Knee battle on December 29, 1890 where 300 Native Americans were massacred. 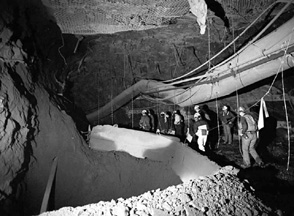 Resources about Exploration and Development History

Show me resources pertaining to exploration and development history