Agriculture in the Rocky Mountain Front

"That to make a go of the ranch, you had to hard-learn its daily elements. Pace your body through one piece of work after another, paying heed always to the living components--the sheep, the grass, the hay--but the gravitational wear and tear on fences and sheds and roads and equipment also somehow attended to, so that you are able to reliably tell yourself at nightfall, that was as much of a day as I can do. Then get up again do it again 364 tomorrows in a row. Sitting there seeing the ranch in its every detail, knowing every ounce of work it required, [...]", Ivan Doig, Ride with me, Mariah Montana 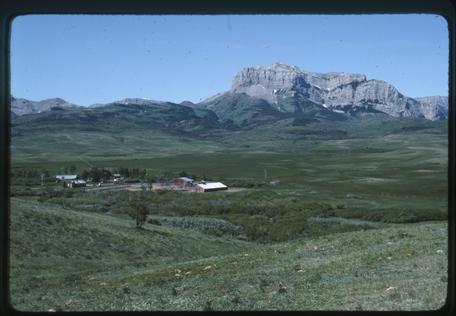 Provenance: Rocky Mountain front, Montana - Salansky ranch (zoomed out), https://arc.lib.montana.edu/ivan-doig/item/209, Ivan Doig Archive, Montana State University (MSU) Library, Bozeman, MT
Reuse: This item is offered under a Creative Commons Attribution-NonCommercial-ShareAlike license http://creativecommons.org/licenses/by-nc-sa/3.0/ You may reuse this item for non-commercial purposes as long as you provide attribution and offer any derivative works under a similar license.
After the expedition Lewis and Clark expedition in 1804-06, trappers and Roman Catholic missionaries had come to Montana. The missionaries established Saint Mary's Mission in the Bitterroot valley (on the west side of the Continental Divide) as the first permanent European settlement. Here, they started with agriculture, and in the 1840's the first pharmacy in Montana was established. In the 1860's gold was found in various places in the Montana Territory but the boomtowns didn't last very long. Besides miners, cattle and sheep ranchers had come out west, taking advantage of the grazing grounds. The first cattle rancher en gros was Johnny Grant in the Deer Lodge Valley in the 1850's. The Enlarged Homestead Act of 1909 enabled dryland farming by increasing the number of acres from 160 to 320. West of Great Falls, the Sun River Irrigation Project was opened up for homesteading in 1908. This didn't only bring new settlers from the Midwest and Minnesota to the area but also initiated other similar irrigation projects like the dams and irrigation canals in the Rocky Mountain Front.

Montana State University started out as the state's land-grant college in 1893 as the Agricultural College of the State of Montana. Today, the College of Agriculture is home to the Montana Agricultural Experiment Station (MAES) conducting research and prepares the students, the future farmers and ranchers, to play a vital part in the economy of the state, the nation and worldwide. 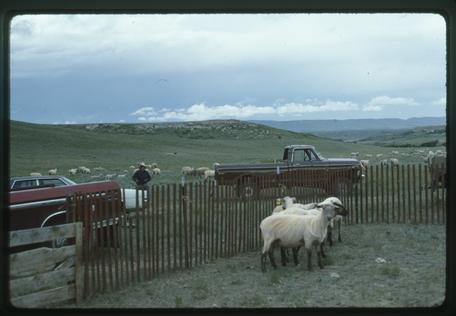 ×
Image of three sheered sheep in a pen. Behind the pen three automobiles can be seen along with a man in a cowboy hat and a herd of sheep. There are hills and clouds in the distance.

Provenance: Sheered Sheep in a pen, https://arc.lib.montana.edu/ivan-doig/item/266/, Ivan Doig Archive, Montana State University (MSU) Library, Bozeman, MT
Reuse: This item is offered under a Creative Commons Attribution-NonCommercial-ShareAlike license http://creativecommons.org/licenses/by-nc-sa/3.0/ You may reuse this item for non-commercial purposes as long as you provide attribution and offer any derivative works under a similar license.

For more information on Montana's history visit Montana's Official State Website or Wikipedia, as well as the State's website on Tribal Affairs. For some interactive information for each county of this area check out our site on the Geographic Setting.

Here are some facts about modern agriculture in Montana:

o One big driver of the local economy are products made (and grown) in Montana as well as products made by Native Americans in Montana. Both have their own add campaigns. Check out their websites and look for their logos! 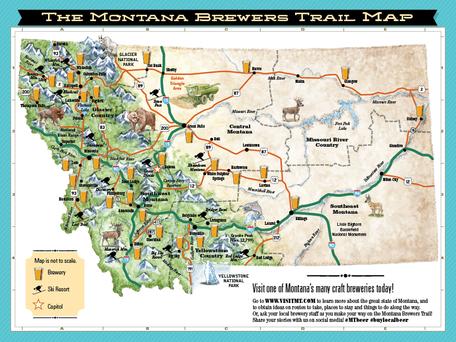 Provenance: Montana Brewers Association
Reuse: This item is offered under a Creative Commons Attribution-NonCommercial-ShareAlike license http://creativecommons.org/licenses/by-nc-sa/3.0/ You may reuse this item for non-commercial purposes as long as you provide attribution and offer any derivative works under a similar license.
While you are traveling through Big Sky country check out places where you can enjoy MT products, from handcrafted beers and spirits to organic produce, grains and beef. This website can help you plan a road trip or two (or more) so you can include your food destinations along with the planning. Especially in the hot summers a cool beer in one of the breweries might be just the right thing. The malt grown in Montana is partially used here as well, mainly by local distilleries. Many of these drinking facilities showcase local musicians and art, so they are well worth your time even if you decide not to test their liquid products. Please be a responsible consumer of adult beverages and plan ahead! Either have a designated driver or spend the night in town.