This is Ivan Doig Country 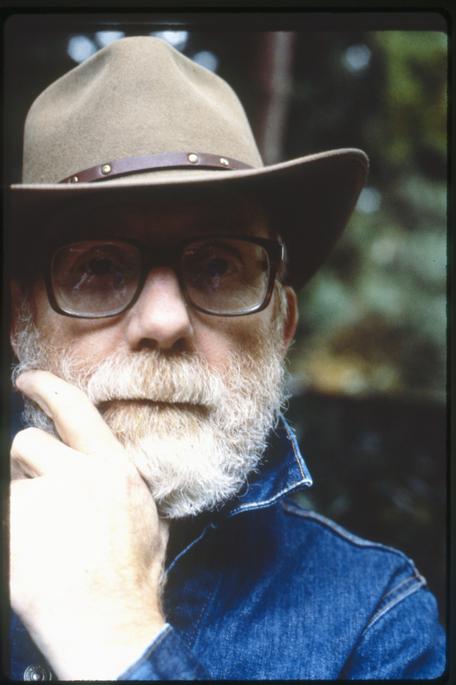 Provenance: Ivan Doig in cowboy hat with hand on chin, https://arc.lib.montana.edu/ivan-doig/item/196, Ivan Doig Archive, Montana State University (MSU) Library, Bozeman, MT
Reuse: This item is offered under a Creative Commons Attribution-NonCommercial-ShareAlike license http://creativecommons.org/licenses/by-nc-sa/3.0/ You may reuse this item for non-commercial purposes as long as you provide attribution and offer any derivative works under a similar license.
Montana native son and award-winning author Ivan Doig (1939-2015) is one of the most-beloved authors who chronicled life in the northern Rocky Mountain region in the latter half of the 20th Century. "Ivan Clark Doig, a third-generation Montanan of Scottish descent, was born June 27, 1939 in White Sulphur Springs, Montana, the only child of Charlie Doig and Berneta Ringer Doig. He grew up in Montana along the east slope of the Rocky Mountains, where much of his writing takes place. A former ranch hand, newspaperman and magazine editor, Doig graduated from Northwestern University where he received bachelor's and master's degrees in journalism. He earned a Ph.D. in history from the University of Washington in 1969, and during his career was the recipient of three honorary doctorates, including one from Montana State University in 1984.
His 16 works of fiction and non-fiction won him numerous awards that propelled him to national prominence as one of the West's most distinguished authors. At century's end, the San-Francisco Chronicle polls named Ivan Doig the only living author in the top 12 of both the Best Fiction of the American West and Best Non-Fiction of the American West. He lived in Seattle, Washington, with his wife Carol Muller Doig. Ivan Doig died April 9, 2015, from multiple myeloma" (Jodi Rasker, Montana State University Library).


Learn more about Ivan Doig's Biography and Bibliographic Record at the Ivan Doig Archive in the Montana State University Library.

Other Works by Ivan Doig that May be of Interest 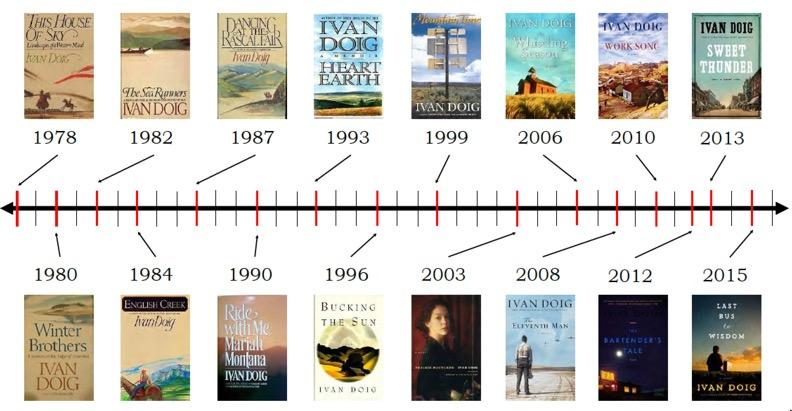 Provenance: Montana State University Library, prepared for 2017 Ivan Doig Exhibition
Reuse: This item is offered under a Creative Commons Attribution-NonCommercial-ShareAlike license http://creativecommons.org/licenses/by-nc-sa/3.0/ You may reuse this item for non-commercial purposes as long as you provide attribution and offer any derivative works under a similar license.

Experience the Rocky Mountain Front through the lyrical writings of Ivan Doig. Here are some evocative selections from Doig's work to give you a sampling of what you'll discover in the breadth of his writings!

"Many of my pages deal with what might be called world-memory – the earth's own memory, the topographical testimony of the planet's processes. I think it can be argued that nature is an ultimate form of memory – different from our human sort; it's the universe's sort, the cells of memory ticking away in tree rings and geological strata and the beaks of finches and glaciated valleys – and that ... nature the rememberer imitates art in finding ways to tell its story, again and again, over and over but never quite the same twice, in the long devotion of the seasons and the ground and the sky." Ivan Doig, Nature Conservancy speech, March 1, 2001

Ivan Doig and the Landscape 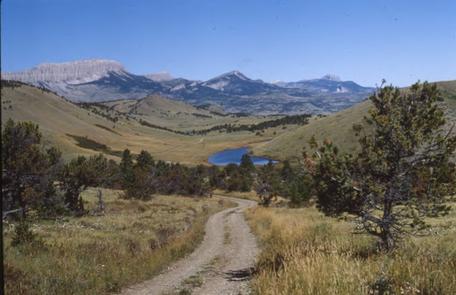 Hide
Image of a dirt road winding through hills towards mountains. There are trees on either side of the road and a body of water in the center of the image. Author noted "looking north in Sun River Game Range" on slide frame.

Provenance: Carol M. Doig, Montana State University Ivan Doig Archive, Object ID 2602-B154-img0392.jpg
Reuse: This item is offered under a Creative Commons Attribution-NonCommercial-ShareAlike license http://creativecommons.org/licenses/by-nc-sa/3.0/ You may reuse this item for non-commercial purposes as long as you provide attribution and offer any derivative works under a similar license.

"We came up over the crest and were walled to a stop. The western skyline before us was filled high with a steel-blue army of mountains, drawn in battalions of peaks and reefs and gorges and crags as far along the entire rim of the earth as could be seen. Summit after summit bladed up thousands of feet as if charging into the air to strike first at storm and lightning, valleys and clefts chasmed wide as if split and hollowed by thunderblast upon thunderblast." Ivan Doig, This House of Sky

Growing up on a homestead in western Montana, it was inevitable for Doig to make a special connection with the land. The way Doig describes Montana allows for readers to feel what he felt when looking at the landscapes surrounding him.

Inside This House of Sky by Duncan Kelso is a book of photographs meant to give physical images of the Montana landscapes that Doig had put into words in his book This House of Sky. However, Doig thought the photos were missing one key element. The photos were devoid of people, and Doig felt that the relationship between people and the landscape was what made Montana such a special place. That's not to say that the photographs aren't outstanding, but just missing a key piece.

Ivan Doig and the Weather

×
A northwest landscape view of Moiese National Bison Range in Montana. The view is looking down over a valley at the base of the Mission Mountain Range while the overcast sky is creating a sunbeam effect across the landscape. There are trees lining a river in the valley, and the Mission Mountain Range in the background is silhouetted by the sunbeams in the foreground.

Provenance: Photo by Carol M. Doig, from Montana State University Ivan Doig Collection, objectd ID 2602-B158-img1954.jpg; used by permission.
Reuse: This item is offered under a Creative Commons Attribution-NonCommercial-ShareAlike license http://creativecommons.org/licenses/by-nc-sa/3.0/ You may reuse this item for non-commercial purposes as long as you provide attribution and offer any derivative works under a similar license.
Montana is known for seeing the extreme sides of weather. From intense cold to sweltering heat, harsh blizzards to booming thunderstorms, Montana sees every variation. Ivan Doig uses his way with words to paint fantastic pictures of the weather in Montana.

"When a Montanan doesn't have anything else to do, he can always worry about the weather." Ivan Doig, Ride With Me, Mariah Montana -
draft and notes for insert ideas

"Along those mountainsides the thunder can roll and roll, and constant claps were arriving to us now like beer barrels tumbling down stairs." Jick, English Creek

"' That weather's comin ' in sure as hell. We're gonna have to hightail it for the brush on Two Medicine with these sheep.' We piled out the doorway into the longest hours of our lives." Ivan Doig, This House of Sky

"In the Two, even spring travels in on the wind; chinooks which can cause you to lean into them like a drunk against a lamppost while they melt away the snowbanks of winter." Jick, English Creek

"The first roar of a chinook beginning to sweep down off the top of the Rockies signaled newness, promise, to my father. ' The wind from Eden,'
he called the chinook, for he must have read that somewhere." Jick, English Creek

"' Gee gods, is it gonna snow on us for the Fourth of July?' Grandma demanded of the sky – and with our shorn ewes we had on our hands a double thousand of the world's most undressed creatures." Ivan Doig, This House of Sky 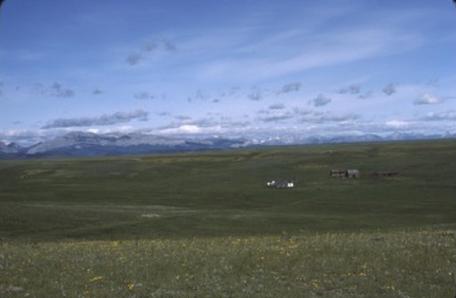 ×
The Jensen ranch sits on the green valley hills sprawled out before the Rocky Mountain Front in the background of this landscape photograph. Yellow wildflowers cover the grass in the foreground.

Provenance: Carol M. Doig, Montana State University Ivan Doig Archive, Object ID 2602-B161-img3331.jpg
Reuse: This item is offered under a Creative Commons Attribution-NonCommercial-ShareAlike license http://creativecommons.org/licenses/by-nc-sa/3.0/ You may reuse this item for non-commercial purposes as long as you provide attribution and offer any derivative works under a similar license.
"Weathered and dour as a fortress, the sheepshed looked to have crouched on its site eternally. Every other building in the ranch yard, however, reared from open ground to open sky as though spilled into place, hard, only an eyeblink before. Nothing greater than a spear of grass backed the buildings—no brushy windbreak, no board fence, not even a pitying fluff of sage as the valley would have provided. As for trees, the entire sum of them on the 2500-acre ranch—two—hunched low at the front of the house, evidently trying to cower out of the wind." Ivan Doig, This House of Sky

"Myself, I liked sheep. Or rather I didn't mind sheep as such, which is the best a person can do towards creatures whose wool begins in their brain, and I liked the idea of sheep. True, sheep had to be troubled with more than cattle did, but the troubling was on a smaller scale. Pulling a lamb from a ewe's womb is nothing to untangling a leggy calf from the inside of a heifer. And a sheep you can brand by dabbing a splot of paint on her back, not needing to invite half the county in to maul your livestock around in the dust of a branding corral. Twelve times out of a dozen, in the debate of cow and ewe I will choose sheep." Jick, English Creek 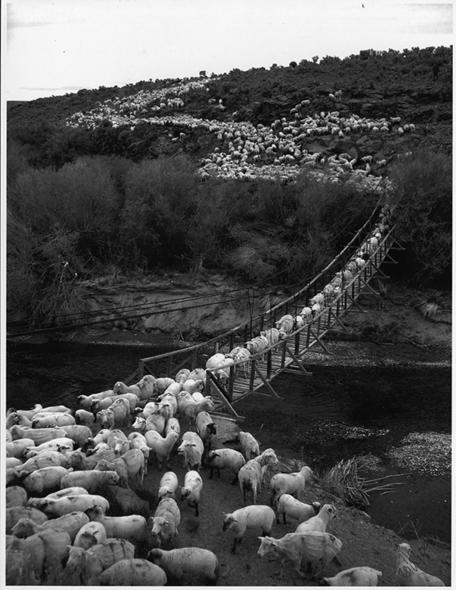 Hide
Landscape photograph of a herd of sheep crossing a narrow simple suspension bridge over a river. The sheep are clustered on the hillside opposite the photographer among the brush and scrub waiting their turn to cross.

"...he was talking about the theory of sheep, which is the world's best. In theory a band of sheep is a garden on legs. Every spring a crop of lambs, every summer a crop of wool. Feed us and clothe us too -- not even potatoes yield so beneficially. But the fleecies are a garden that wanders around looking for its own extinction, and in the Two Medicine country were many sources willing to oblige their mortal urge." Angus, Dancing at the Rascal Fair

Ivan Doig and Hunting and Fishing

"He had a hunter's voice, which could soften just enough not to carry far and yet be heard clearly." Ivan Doig, This House of Sky

Fishing features in many of Doig's novels, including Dancing at the Rascal Fair, The Bartender's Tale, and English Creek. Growing up, Doig's family and the people they knew fished using simple means, and he tends to poke fun at "fancy fishing" in his works:

"My father still had a reputation in the Forest Service from the time some muckymuck who was quite a dry-fly fisherman asked him what these English Creek trout took best."

June 27th is the date of the annual "Doig Days" celebration in Depuyer, Montana. Check with the local Chamber of Commerce for details.

The Montana Historical Society publishes a quarterly journal, the Montana Magazine of Western History that "...showcases the people, places, and events that shaped the state and the western region". Look for the fall 2018 volume that will have a them of Ivan Doig and his work.

Additional Reading About the Cultural Heritage of the American West

If you enjoy the writing of Ivan Doig, you might also enjoy reading: