At first glance, the terms conservation and preservation may hold similar meanings. However, there are key differences between the two practices, and their implementation on the Rocky Mountain Front has far-reaching implications for the wildlife and the people of the area. Generally, conservation seeks the proper use of nature, while the goal of preservation is to protect nature from use. Overall, efforts on the Rocky Mountain Front seem to strike a balance between conservation and preservation--many efforts prioritize involvement of landowners and locals along with protecting wildlife habitat and natural landscapes. For more on general information regarding conservation, visit the National Park Service website.

Take a look at the overview and links on conservation efforts on the Rocky Mountain Front, and decide for yourself: how much preservation in wilderness areas is too much? What are the benefits and drawbacks of conservation efforts? What is the carrying capacity of the region with respect to wildlife, logging, grazing operations? What are current issues plaguing conservation efforts in the Rocky Mountain region, and how should we address them? See the economic analysis of the impact of public lands in this area done by Headwaters Economics (September 2013) report Montana's Rocky Mountain Front: "This report analyzes the Front's land, people, and economy, how the region has changed in important ways during the past several decades, and the potential impact of the proposed Rocky Mountain Heritage Act on the Front."

The Rocky Mountain Front is one of the most biodiverse places in the contiguous United States. With the exception of the free-roaming bison, nearly all species documented by Lewis and Clark in 1806 remain at stable or increasing populations. Tectonic and climatic features along the Front generate a mix of prairie, forest, and alpine tundra that yield a high diversity of animals and plants. Several measures have been implemented to protect the biodiversity of this area.

The Rocky Mountain Front Conservation Area was instituted in 2005 and covers nearly 1,000,000 acres of Lewis and Clark, Pondera, and Teton counties. The project is meant to protect the unique, diverse, and largely unfragmented ecosystem along the Front, and to prevent drastic anthropogenic change caused by large residential and commercial development. For more information, see the full Land Protection Plan for the area. 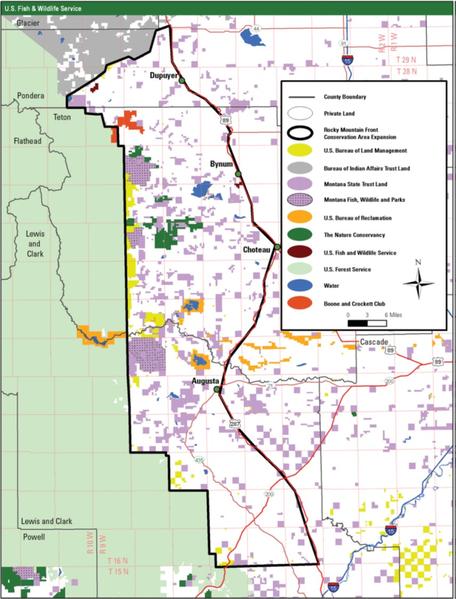 ×
A map of land ownership in the Rocky Mountain Conservation Area.

Provenance: Image from the US Fish and Wildlife Service. https://www.fws.gov/mountain-prairie/refuges/lpp_PDFs/rmf_2011_lpp_final_2description.pdf
Reuse: This item is offered under a Creative Commons Attribution-NonCommercial-ShareAlike license http://creativecommons.org/licenses/by-nc-sa/3.0/ You may reuse this item for non-commercial purposes as long as you provide attribution and offer any derivative works under a similar license.

Below are some of the current conservation efforts on the Rocky Mountain Front.

The "North American Model of Wildlife Conservation" has 7 essential principles: 1) wildlife resources are a public trust to be managed by governments for the benefit of all citizens; 2) unregulated commercial markets for wild game that decimate wildlife populations are eliminated; 3) allocation is by law, meaning that laws are developed by citizens and enforced by government agencies to regulate the proper use and management of wildlife; 4) opportunity for all, which means that every citizen has the freedom to view, hunt and fish, regardless of social or economic status; 5) wild game populations cannot be killed casually, but only for a legitimate purpose as defined by law; 6) wildlife will be considered an international resource because wildlife migrates across political boundaries; and 7) science is the proper basis for wildlife policy and management, not opinion or conjecture, in order to sustain wildlife populations (Boone and Crocket Club Position Statement, 2014). The abundant wildlife resources of North America were significantly diminished during the period of exploration and development of the American West (ca. 1850-1899) resulted in extinction of some species (e.g., carrier pigeon) and near collapse of populations of large game animals (bison, elk, deer, antelope). In response, the first game laws were enacted, and a public debate began about how to best manage wildlife: a preservationist approach that advocated that public lands should not be used for timber harvest or hunting (e.g., John Muir, founder of the Sierra Club), or advocates of management and wise use of resources for the enjoyment of all (e.g., local sportsman's clubs; Boone and Crockett Club, founded by Theodore Roosevelt and colleagues in 1887 whose mission included: elimination of market hunting, establishment of the national Wildlife Refuge System, the Forest Service, National Park Service, with an emphasis on hunting ethics, research and education, and establishment of a grants program) [Historical information provided by Dr. Joshua Millspaugh, Wildlife Biology Program, University of Montana. 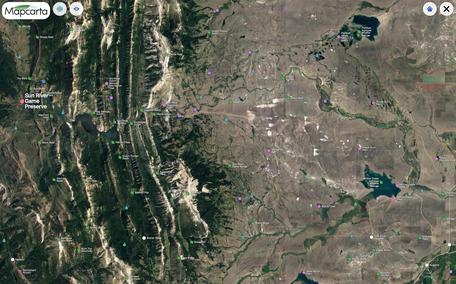 Provenance: Map was generated using Mapcarta.
Reuse: This item is offered under a Creative Commons Attribution-NonCommercial-ShareAlike license http://creativecommons.org/licenses/by-nc-sa/3.0/ You may reuse this item for non-commercial purposes as long as you provide attribution and offer any derivative works under a similar license.
The Augusta-Choteau area is an example of where these competing philosophies have played out in the past century.

The Endangered Species Act, Land Rights, and Grizzly Bears: How Much Conservation is "Enough?"

Despite great success in preserving species and the pristine landscape, there are issues that accompany conservation efforts in the Rocky Mountain Front area. Recently, grizzly bears have made a return to the Front and have been seen wandering onto the plains as far east as Great Falls. Attacks on livestock and people have been reported recently, with bears wandering onto the plains which is part of their natural habitat. How should human-grizzly bear conflicts be managed and hopefully prevented?

Hide
Grizzly bears are an important piece of many ecosystems along the Rocky Mountain Front. The population rebound in the Greater Yellowstone Area over the past 40 years is considered one of the great conservation success stories, but the recent delisting of the bears from the threatened species list has been a point of contention. Recently, bears have made headlines with more frequent interactions with people.

Provenance: NPS photo by Nathan Kostegian at https://www.nps.gov/articles/aps-v6-i2-c15.htm. Image is not modified.
Reuse: This item is offered under a Creative Commons Attribution-NonCommercial-ShareAlike license http://creativecommons.org/licenses/by-nc-sa/3.0/ You may reuse this item for non-commercial purposes as long as you provide attribution and offer any derivative works under a similar license.

Much of the conservation efforts in the region operate under federal regulations, such as the Endangered Species Act (ESA). While popular opinion is flooded with support, the new administration is taking strides to weaken federal regulations in favor of stimulating economic growth and giving states the freedom to control wildlife regulations. Since its inception in 1973, the ESA has been attributed to great successes and controversies (see these NPS pieces on the reintroduction of wolves and conservation of grizzly bears in Yellowstone). What role do people and politics have in conservation? At what level should the government have a hand in managing wildlife?

Though a bit dated, Montana Outdoors has a provocative piece on the ESA as it relates to Montana. What are your thoughts on conservation policies and practices in Montana?

During the 1980's, the Reagan administration allowed several oil and gas exploration leases in the Bob Marshall Wilderness Area and the Badger Two Medicine area without consulting Blackfeet tribal government or performing any environmental analysis (actually, because of these explorations, Egg Mountain was discovered). While the leases were deemed invalid in the Bob Marshall Wilderness, it was not until 2016 that leases were retired on sacred Blackfeet land of the Badger Two Medicine area. However, backlash from the Lousiana-based energy company Solenex ensued, and a lawsuit and trial is currently underway. The Solonex party argues the leases were terminated illegally and the ramifications extend beyond oil and gas into contract law and property rights. Proponents of the lease termination--including the Blackfeet Headwaters Alliance, Glacier-Two Medicine Alliance, Montana Wilderness Association, National Parks Conservation Association and The Wilderness Society--emphasize the cultural significance and traditions regained by the Blackfeet. Additionally, the Badger Two Medicine area is a key migration route for iconic species, like grizzly bears and wolverines. Where do you think the land rights of the Badger Two Medicine area lay? How do we determine land ownership in today's world?

For more on the Badger Two Medicine, see its significance to The Wilderness Society and their report Drilling in the Rocky Mountains: How Much and at What Cost? (2004) .