Diffusion is the transport process by which atoms, ions or molecules dissolved in a medium, such as minerals, glasses, melts, gases or fluids, migrate. Diffusion describes mass transport, which happens in the absence of bulk flow and is due to thermally activated random motion of particles. At any temperature that is unequal to absolute zero atoms are in motion, independent of their aggregation state. In diffusion reactions particles migrate from places of higher concentration to those of lower concentration. 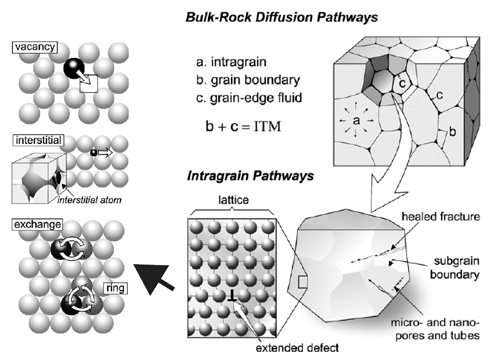 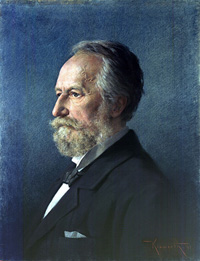 In 1855 the German physician and physiologist Adolf Eugen Fick (1829-1901) introduced Fick's law of diffusion, describing diffusion of a gas across a fluid membrane, and thus the relationship between diffusion flux of a component and its concentration gradient. Albert Einstein (1879-1955) continued working on the relationship between random atomic movement and the process of diffusion. Diffusion has been of interest in a diversity of fields since then, such as physics, metallurgy and chemistry.

In geology the study of diffusion is used to understand magmatic and metamorphic processes, mass transport, fluid/rock interactions, thermal and physico-chemical history of rocks and crystal growth, mineral zonation, atom ordering, exsolution features and isotopic characteristics. Diffusion is a microscopic process, which can lead to macroscopic effects. A common example is the initial phase of explosive volcanic eruptions, in which diffusion controls bubble growth by allowing gas molecules to migrate into bubbles.

There are two types of diffusion reactions, steady-state and nonsteady-state. The former takes place at a constant rate, which means the flux of particles crossing a certain interface is constant with time; in the latter reaction the diffusion rate is a function of time.

where D is independent of C and x. It describes how the concentration is related to space and time with a given initial concentration distribution. The diffusion distance x is proportional to the square root of duration

A temperature increase leads to a greater particle mobility. Diffusivity increases rapidly with temperature; it follows the Arrhenius relation:

where T is the temperature in K, D0 is the diffusivity, E is the activation energy (positive) and R is the gas constant. D0 and E are temperature-independent constants.

The value of diffusivity describes the 'rate' of diffusion. Diffusivity depends on factors, such as temperature, pressure, composition, physical state, structure of the phase, and oxygen fugacity.

The rate of diffusion on surfaces is higher than along grain boundaries, which in turn is much higher than that of volume diffusion. Diffusivities of alkali ions are in general higher than those of oxygen and alkali-metallic ions, such as silicon, which is due to different bonding strengths.

The goal of all diffusion experiment is to control the environment around the sample, such as temperature, pressure, fugacities (oxygen, hydrogen, water) in order to measure reaction kinetics. The sample can be placed in a furnace or in a sealed sample container with buffers and water. For the study of diffusion profiles of deep Earth minerals, the sample can be loaded for example in a piston-cylinder press, a diamond anvil cell or a multi-anvil apparatus, or in an internally-heated pressure vessel.

There are bulk powder-fluid exchange experiments, where only an exchange average as a function of time is the result of the study, and experiments on single-crystals, which can be either mass-loss experiments (successive heating) or directly measured diffusion profiles (single continuous heating event).

When the word 'diffusion' is mentioned without further explanation, diffusion describes the volume diffusion in a system due to thermally induced random motion of particles. Note that in literature diffusion definitions differ a lot. For a discussion of other definitions than those listed below, see Zhang (2010). Generally, diffusion is classified based on either the diffusion species or the diffusion medium.

1) Volume diffusion: Diffusion within a system, where the diffusion medium can be either isotropic or anisotropic. In the former diffusion properties do not depend on direction. Examples are melts, glasses and isometric minerals.

Example: diffusion of Mg and Fe2+ in a garnet crystal

2) Grain-boundary diffusion: Diffusion along interfaces, such as interfaces between the same minerals, different minerals or mineral-fluid interfaces. This kind of diffusion is generally related to a high defect concentration, diffusivities are usually higher than those related to volume diffusion.

3) Self diffusion: Random displacement of atoms in the absence of chemical gradients.

Interdiffusion (binary diffusion, mutual diffusion):Diffusion in a binary system, such as MgO-SiO2.

Multispecies diffusion: Diffusing component is present in two or more species, such as for example H2O present as H2O molecule and OH groups.

Multicomponent diffusion: Three or more components are diffusing in a system (melt, mineral).