A significant percentage of mineral physics studies are now conducted at synchrotron facilities. In this module we will talk a little bit about what synchrotrons are and how the x-rays that they produce are used in high pressure research. 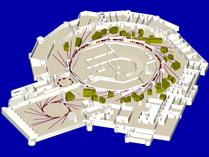 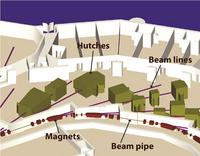 A synchrotron is a type of cyclic particle accelerator. Although synchrotrons can be used to accelerate a variety of charged particles, for the purpose of this discussion we will focus on electrons. When an electron accelerates, either by changing the magnitude or direction of its travel, it emits photons; hence the term synchrotron "Light". The synchrotron is composed of a ring-shaped vacuum-filled pipe (the ring) surrounded by magnets (Figures 1-3). Electrons are injected into the ring at high speed. The vacuum is required to keep the electrons from scattering and being slowed down by interacting with gas molecules. In a simple synchrotron, there are two kinds of magnets, bending and focusing. The focusing magnets, which are quadrupoles, focus the electrons into a small beam. The bending magnets, which are dipoles, force the electrons to travel in a curved path. As the electrons are accelerated by the bending magnet, they emit photons tangent to the curve along which they are traveling. The energy of the photons is a function of the energy of the electrons and the strength of the magnetic field. The intensity of the radiation is a function of the number of electrons going through the magnetic field. 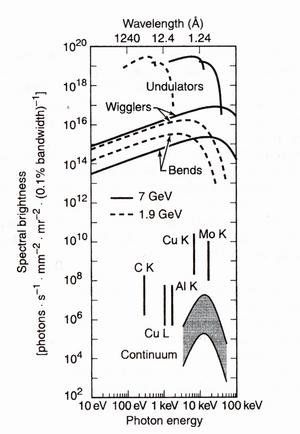 Synchrotron light facilities are mostly designed such that the maximum intensity of the synchrotron radiation is in the x-ray portion of the electromagnetic spectrum; however, there are some synchrotrons designed to maximize infrared or ultraviolet radiation. The x-rays come off the beam pipe over a region which can be many centimeters in dimension. This fan of x-rays is then cut down into a "beam" or several beams of x-rays by blocking the unwanted x-rays with lead shielding. As with the electrons, x-rays also interact with gas molecules in the air, so to prevent a loss of x-ray intensity an evacuated pipe is arranged to conduct the x-rays to where the experimental equipment is located. These tangentially arranged pipes are referred to as "beam lines".

The amount of ionizing radiation in synchrotron x-ray beams is enough to produce considerable damage to organism even over a short duration. Therefore, experiments must be conducted in "hutches" (Figure 3). Hutches are small shielded buildings built around the x-ray beam line and the experimental area where the beam will be used. Shutters between the synchrotron and the hutch prevent x-rays from entering the hutch when the door is open and systems of safety controls and interlocks prevent people from being trapped in the hutch when the door is closed and x-rays enter. Typically, equipment in the hutch is outfitted with remotely controlled motors and cameras that allow much of the experiment to be conducted from outside the hutch. 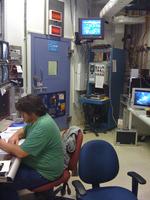 Figure 5. Work station outside of X17B2 hutch at the NSLS. The blue door leads into the hutch. Lit signs above the door give the status of the shutters and the interlocks. To the right of the blue door is a unit used for remote control of the multianvil apparatus that resides inside the hutch. Click for larger image.

Figure 6. Work station outside of X17B2 hutch at the NSLS. The experiment is conducted using data collection software and apparatus control software displayed on the 3 large computer monitors. Video screens above show the interior of the hutch. Click for larger image. 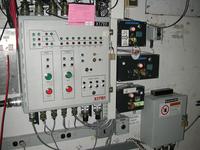 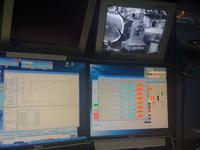 Figure 8. User interface at APS Sector 16, HPCAT beamline BM-D. The bottom two screens show programs used to collect data and manipulate beamline instrumentation remotely. The top screen shows video image of a DAC mounted on the beamline. The beam enters in the narrow pipe to the right, the detector is on the left. Click for larger image.

The primary reason that synchrotrons are so valuable for mineral physics research is the high flux (number of x-rays per unit area per unit time). The energies of the x-rays are quite similar to what a conventional laboratory x-ray source produces. But the flux is many orders of magnitude greater. This enables rapid data collection even for very small samples such as those in the diamond anvil cell (DAC), and also ensures that there are enough x-rays to get through sample assembly parts and confining media used in the multi-anvil. A wide variety of experiments are conducted at synchrotrons including diffraction, tomography, absorption, inelastic scattering and fluorescence experiments. Diamond anvil cells (DACs) can be used for all of these. Due to the nature of the confining media, multi-anvil apparatus can only be used for diffraction and absorption measurements. 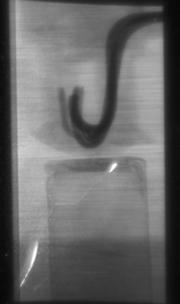 Figure 9. Radiograph of a D-DIA sample assembly. The thermocouple wires are composed of W-Re alloy and appear black because they absorb all the x-rays that strike them. The capsule material (25 micron thick Ni foil) partially absorbs the x-rays. Where the x-ray path through the Ni is longer (across the top of the capsule and along the sides) more x-rays are absorbed. Click for large image.

Hide
NSLS X17B2 experiment San_197. Image taken by Pamela Burnley
A key concept for understanding both the design of synchrotrons and experiments conducted at synchrotrons is x-ray absorption. X-rays are very energetic and can pass through many materials that are not transparent to visible light. However if an x-ray strikes the nucleus of an atom or interacts with an electron it will be absorbed or scattered. X-ray energy deposited in an atom can be released in a variety of different and interesting ways (from heat to other x-rays), but for the moment we will focus on the fact that the x-ray, for all intents and purposes, has been stopped by the atom. When an x-ray beam travels through low density matter (e.g. air) it can travel a fair distance without loosing a lot of intensity (number of x-ray photons).

Therefore, although a synchrotron x-ray beam is usually made to travel in a vacuum pipe, in a hutch it may be convenient to allow it to travel distances of several feet in air. In contrast, matter composed of atoms with a high atomic number, absorbs x-rays very efficiently. Thus x-ray shielding is composed of lead. In designing high pressure apparatus for use with synchrotron x-rays it is important to ensure that the path of the x-rays though the apparatus is not blocked by high Z materials. For example, a DAC used for x-ray diffraction may have holes and slots cut into the cell body to allow the x-rays to enter and diffracted x-rays to escape. Multi-anvil cell assemblies must be designed with x-ray transparent materials, and depending on the requirements of the experiment, some of the anvils may be fabricated from sintered diamonds or cubic boron nitride. X-ray absorbing materials may also be used in an experiment to mark the position of the sample or allow the experimentalist to "see" changes that occur during an experiment. Experiments that detect melting by observing a metal sphere falling through a sample are one example of this type of strategy. 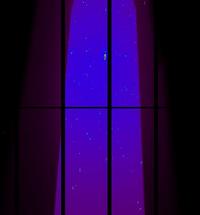 Figure 10. Diffraction spots on an image plate for a Laue diffraction experiment in the DAC. The DAC has a slot cut in it so that the diffracted x-rays can escape from the cell and strike the image plate. Beyond the slot – there is no diffraction. The image plate is composed of a number of detectors – the spaces between the detectors create the dark horizontal and vertical bars. Click for larger image.

Hide
Image taken by Pamela Burnley
The diffraction of x-rays is another physical phenomenon that is used extensively in synchrotron research. Diffraction is used both to steer and manipulate the x-ray beam as well as to gather information from the sample. We will discuss diffraction from the sample in detail in the module entitled synchrotron x-ray diffraction. As mentioned above, diffraction can be used to extract a single wavelength from the white beam to create a monochromatic beam. A group of curved crystal can be used to bend and focus the beam. These devices are referred to as "mirrors" and "lenses" even though they work differently than mirrors and lenses that are used with visible light.

A typical university X-ray diffractometer uses a filament to produce electrons that strike a target made of metal (typically Cu or Mo) which fluoresces and produces x-rays that are dominated by one or two wavelengths. Synchrotron x-rays are produced over a wide variety of energies, thus it is referred to as "white light". If an experimentalist needs a beam of x-rays with a single wavelength (referred to as monochromatic light), a crystal with the appropriate lattice spacing is used to diffract that wavelength out of the white beam creating a monochromatic beam. Because a monochromatic beam is extracted from the white beam it will be significantly less intense (number of photons per time) but the overall intensity of the synchrotron beam is so high this is not a problem.

The following are good primers on Synchrotron light and light sources in general:

The author was fortunate to have the opportunity to tour the NSLS II while it was under construction. Photos showing the interior of the building, the tunnel for the ring and some of the magnets can be found here (Acrobat (PDF) 2.8MB Dec1 11).

Links to beamlines where Mineral Physics experiments are being conducted: