What is X-Ray Fluorescence (XRF)

An X-ray fluorescence (XRF) spectrometer is an x-ray instrument used for routine, relatively non-destructive chemical analyses of rocks, minerals, sediments and fluids. It works on wavelength-dispersive spectroscopic principles that are similar to an electron microprobe (EPMA). However, an XRF cannot generally make analyses at the small spot sizes typical of EPMA work (2-5 microns), so it is typically used for bulk analyses of larger fractions of geological materials. The relative ease and low cost of sample preparation, and the stability and ease of use of x-ray spectrometers make this one of the most widely used methods for analysis of major and trace elements in rocks, minerals, and sediment.

The analysis of major and trace elements in geological materials by x-ray fluorescence is made possible by the behavior of atoms when they interact with radiation. When materials are excited with high-energy, short wavelength radiation (e.g., X-rays), they can become ionized. If the energy of the radiation is sufficient to dislodge a tightly-held inner electron, the atom becomes unstable and an outer electron replaces the missing inner electron. When this happens, energy is released due to the decreased binding energy of the inner electron orbital compared with an outer one. The emitted radiation is of lower energy than the primary incident X-rays and is termed fluorescent radiation. Because the energy of the emitted photon is characteristic of a transition between specific electron orbitals in a particular element, the resulting fluorescent X-rays can be used to detect the abundances of elements that are present in the sample.

X-Ray Fluorescence (XRF) Instrumentation - How Does It Work?

The analysis of major and trace elements in geological materials by XRF is made possible by the behavior of atoms when they interact with X-radiation. An XRF spectrometer works because if a sample is illuminated by an intense X-ray beam, known as the incident beam, some of the energy is scattered, but some is also absorbed within the sample in a manner that depends on its chemistry. The incident X-ray beam is typically produced from a Rh target, although W, Mo, Cr and others can also be used, depending on the application. 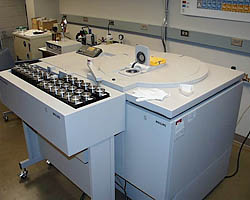 Hide
An XRF spectrometer, with the sample port on top, and a set of samples in silver metallic holders in the sample changer in front.
When this primary X-ray beam illuminates the sample, it is said to be excited. The excited sample in turn emits X-rays along a spectrum of wavelengths characteristic of the types of atoms present in the sample. How does this happen? The atoms in the sample absorb X-ray energy by ionizing, ejecting electrons from the lower (usually K and L) energy levels. The ejected electrons are replaced by electrons from an outer, higher energy orbital. When this happens, energy is released due to the decreased binding energy of the inner electron orbital compared with an outer one. This energy release is in the form of emission of characteristic X-rays indicating the type of atom present. If a sample has many elements present, as is typical for most minerals and rocks, the use of a Wavelength Dispersive Spectrometer much like that in an EPMA allows the separation of a complex emitted X-ray spectrum into characteristic wavelengths for each element present. Various types of detectors (gas flow proportional and scintillation) are used to measure the intensity of the emitted beam. The flow counter is commonly utilized for measuring long wavelength (>0.15 nm) X-rays that are typical of K spectra from elements lighter than Zn. The scintillation detector is commonly used to analyze shorter wavelengths in the X-ray spectrum (K spectra of element from Nb to I; L spectra of Th and U). X-rays of intermediate wavelength (K spectra produced from Zn to Zr and L spectra from Ba and the rare earth elements) are generally measured by using both detectors in tandem. The intensity of the energy measured by these detectors is proportional to the abundance of the element in the sample. The exact value of this proportionality for each element is derived by comparison to mineral or rock standards whose composition is known from prior analyses by other techniques.

X-Ray fluorescence is used in a wide range of applications, including X-Ray fluorescence is particularly well-suited for investigations that involve X-ray fluorescence is limited to analysis of In most cases for rocks, ores, sediments and minerals, the sample is ground to a fine powder. At this point it may be analyzed directly, especially in the case of trace element analyses. However, the very wide range in abundances of different elements, especially iron, and the wide range of sizes of grains in a powdered sample, makes the proportionality comparison to the standards particularly troublesome. For this reason, it is common practice to mix the powdered sample with a chemical flux and use a furnace or gas burner to melt the powdered sample. Melting creates a homogenous glass that can be analyzed and the abundances of the (now somewhat diluted) elements calculated.

X-Ray fluorescence is particularly well-suited for investigations that involve:

In theory the XRF has the ability to detect X-ray emission from virtually all elements, depending on the wavelength and intensity of incident x-rays. However...

Virtually any solid or liquid material can be analyzed, if adequate standards are available. For rocks and minerals, typical commercial instruments require a sample constituting at least several grams of material, although the sample collected may be much larger. For XRF chemical analyses of rocks, samples are collected that are several times larger than the largest size grain or particle in the rock. This initial sample then suffers a series of crushing steps to reduce it to an average grain size of a few millimeters to a centimeter, when it can be reduced by splitting to a small representative sample of a few tens to hundreds of grams. This small sample split is then ground into a fine powder by any of a variety of techniques to create the XRF sample. Care must be taken particularly at this step to be aware of the composition of the crushing implements, which will inevitably contaminate the sample to some extent. 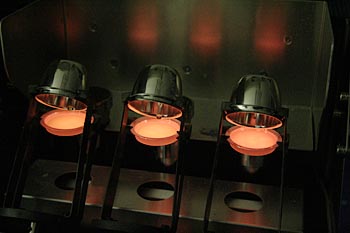 The following literature can be used to further explore the XRF technique and uses of XRF data.

For more information about X-Ray Fluorescence (XRF) follow the links below.

For examples of the use of XRF data in teaching activities, check out: