As a class, SIMS instruments (aka ion microprobes) use an internally generated beam of either positive (e.g., Cs) or negative (e.g., O) ions (primary beam) focused on a sample surface to generate ions that are then transferred into a mass spectrometer across a high electrostatic potential, and are referred to as secondary ions. In a similar technique, a beam of high-speed neutral atoms (e.g., Ar) can substitute for the primary ion beam, an approach used primarily for surface analysis of organic compounds that has few applications in the geosciences and is not discussed here. 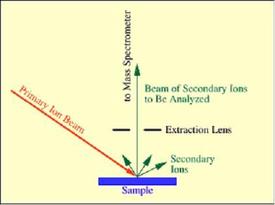 The interaction of the primary ion beam with the sample (under vacuum) provides sufficient energy to ionize many elements. If the primary beam is composed of positively charged ions, the resultant ionization favors production of negative ions; primary beams of negative ions favor generation of positive ions. Although most atoms and molecules removed from the sample by the interaction of the primary beam and the sample surface (referred to as sputtering) are neutral, a percentage of these are ionized. These ions are then accelerated, focused, and analyzed by a mass spectrometer.

In "dynamic SIMS" mode the primary ion beam exceeds the "static limit" (~1E12 ions/cm2) producing a high yield of secondary ions. This technique is used for "bulk" analysis of elements and isotopes, and is particularly well-suited for analysis of isotopes and trace elements in minerals (e.g. REE in garnet). Alternatively, "static SIMS" uses a much lower energy primary ion beam (usually Ga or Cs). This technique is typically used for analysis of atomic monolayers on material surfaces to obtain information about molecular species on material surfaces (e.g. organic compounds; see module on Time-of-Flight SIMS.

Secondary Ion Mass Spectrometer (SIMS) Instrumentation - How Does It Work? 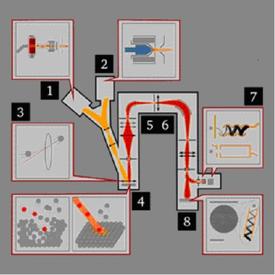 Hide
Typical forward geometry SIMS/ion microprobe configuration (Cameca IM 6f) showing: 1) negative primary beam source, 2) positive primary beam source, 3) electrostatic lens for primary beam, 4) sample stage and sputtering, 5) electrostatic sector, 6) magnetic sector, 7) collectors, and 8) ion imaging detector. Click image to enlarge. Details
There are several different designs of SIMS currently being manufactured commercially that have applications in the geosciences (e.g., Cameca's 1280, 7f, and NanoSIMS, ASI's SHRIMP and SHRIMP RG, EAG's ToF SIMS). Most of these instruments are characterized by a source region in which the intensity, energy, and orientation of the primary beam (relative to the sample) are controlled. Ions generated by this process form the secondary beam and are subsequently transmitted within a continuous high vacuum environment to a mass spectrometer. Most SIMS instruments used for elemental and isotopic analyses function by accelerating ions produced in the source along a potential gradient, typically 10 KV, and then transferring these ions into the mass spectrometer. Details of the configuration of the mass spectrometer vary from one application to another, but all utilize both magnetic and electrostatic analyzers, commonly referred to as sectors. If the electrostatic analyzer (sector) precedes the magnetic sector, the design is referred to as forward geometry. The advantage of this configuration is that

Typical configuration of a reverse geometry SIMS, the SHRIMP RG ion microprobe. Click image to enlarge. Details
the electrostatic filter reduces the energy range of the secondary ions so that they can then be separated into independent ion beams (based on the charge/mass ratio) by passing them through a magnetic field (magnetic sector). In this configuration, multiple ion beams can be measured simultaneously. If the magnetic sector precedes the electrostatic sector (reverse geometry), then mass resolution is improved at the cost of losing the ability to measure multiple ion beams simultaneously. Other types of mass spectrometers can be coupled to the SIMS source, including quadrupole and time-of-flight analyzers. These latter configurations have fewer applications in the geosciences. 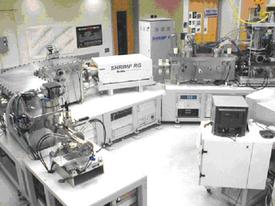 SHRIMP RG at the Stanford-USGS Microanalytical Center (SUMAC). Details
In geochemistry SIMS is the instrumentation of choice for several analytical tasks, most noteworthy are:

The primary advantages of SIMS include:

Because both atomic and molecular species are produced during sputtering of the samples, not all elements in all substrates (matrices) can be analyzed quantitatively. For example, Lu-Hf in zircon is plagued by unresolvable isobaric (equal mass ions) interferences that cannot be overcome by either forward geometry multi-collection or reverse geometry high-resolution instruments. SIMS instrumentation tends be expensive, with typical instruments costing $2-3M.

As for all geochemical analyses, care must be taken to preserve sample integrity from the time of collection through analysis in all steps of physical and chemical preparation. In SIMS, care must be taken in the physical preparation of the sample prior to analysis. For SIMS the sample surface must be highly polished (~1 micrometer) and coated with a conducting, pure metal (particularly for non-conducting specimens) to avoid charge buildup on the surface. Failure to do so that can alter the behavior of the analyte ions and lead to erroneous results.

Quantitative isotopic and elemental data from this technique must be derived by comparing measurements of unknowns to well characterized standards. A key aspect of producing accurate, reproducible results, therefore, is identification and utilization of appropriate standards. For example, U-Th-Pb dating of zircon requires alternating analyses of unknown zircons with standard zircons in order to determine accurate U/Pb ratios and ages.

Recommended Readings: Applications from the University of Wisconsin SIMS lab:

For more information about Secondary Ion Mass Spectrometer (SIMS) follow the links below.