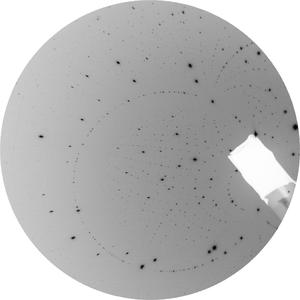 There is no fundamental difference between diffraction experiments conducted at high pressure and those at one atmosphere. The only differences are related to the physical constraints placed by the high pressure apparatus. For example electron diffraction is an incredibly useful tool in transmission and scanning electron microscopy, but since electrons cannot penetrate any significant amount of solid, no one has figured out how to do electron diffraction during high pressure experiments. Both neutrons and x-rays can be used in high pressure experiments. Neutrons interact less with matter than electrons do so they can penetrate and diffract from high Z metal samples. neutrons also interact with hydrogen which is nearly invisible to x-rays. However, neutrons also require much more low Z-material (most earth materials fall into this category) to produce measurable diffraction. Typically an opposed anvil device called a Paris-Edinburgh apparatus is used for neutron diffraction. Sufficiently bright X-rays can penetrate multi-anvil cell assemblies as well as diamond-anvil cells (DAC) and can produce patterns from just cubic microns worth of material.

X-ray diffraction experiments can be conducted in DACs with both synchrotron and standard lab x-ray sources. Resolution is higher with lab sources but the intensity is much lower so the experimentalist must be patient as collection times are long. Synchrotron x-rays can be used for diffraction experiments conducted in both DAC and multi-anvil as well as the large opposed anvil device called the Paris-Edinburgh cell. As mentioned above, the physical principles that govern x-ray diffraction at high pressure are the same at low pressure. Therefore, understanding Bragg's Law (nÎ»=2dsinÎ¸) and the Laue equations is essential. You can find basic information about x-ray diffraction in your favorite mineralogy text. There are also good resources on the web:

HyperPhysics: This page contains information about Bragg's Law and the Bragg Spectrometer

SERC: This page contains a collection of links to Geochemical Analytical Instruments and techniques including Bragg's Law

IUCR Online Dictionary of Crystallography: This page contains the definition and direct derivation of Bragg's law, along with additional information about the order of the reflection, extinctions or systematic absences, and the influence of deformation

University of Cambridge DoITPoMS Teaching and Learning Package X-ray Diffraction Techniques. These pages cover the fundamentals of x-ray diffraction including Bragg's Law and its application in both powder and single crystal diffraction.

Powder diffraction as, the name implies, is conducted on polycrystalline samples. If monochromatic light is used then the wavelength (Î») is fixed and each d-spacing will produce a cone of diffracted x-rays at a fixed Î¸ angle. Typically an image detector is used to collect this type of pattern; the intersection of the plane of the image detector with the cone of diffracted x-rays produces a ring for each d-spacing. Typically the angle around the ring is referred to as Ïˆ. Software is used to integrate the intensity over Ïˆ and the d-spacings are calculated by fitting the peak in intensity versus Î¸. Intensity around the ring may vary depending on the orientation of the crystals in the polycrystal. If the polycrystal is textured there will be peaks in intensity at various Ïˆ values. If the polycrystal is coarse grained or grains grow during the experiment the pattern will exhibit spots.

If white light is used with a powder sample an image plate would record an indecipherable number of diffraction spots. Therefore, energy dispersive detectors are typically used for powder diffraction with white light. These detectors are placed at fixed Î¸ values and record intensity versus energy (which is inversely proportional to wavelength). Depending on the size of the detectors and the type of experiments being conducted a number of energy dispersive detectors may be employed during a single experiment either at different Ïˆ angles or potentially at different Î¸ angles.

Example of a powder diffraction pattern collected on an energy dispersion detector.

If the sample is a single crystal and monochromatic light is used, the diffraction pattern will consist of a 3 dimensional array of spots that is recorded using an image plate. In this case, the spots that are visible in the diffraction pattern will come from a limited number of lattice planes that form a zone (Figure 5). By rotating the crystal or the detector a number of zones can be measured and the entire crystal structure can be derived. In addition, because the scattering power of the planes of atoms in a lattice depends on the atomic number and density of atoms, the intensity of x-rays in each reflection can be used to determine the position of the atoms within the unit cell. thus with data of sufficient quality, the complete structure of a mineral can be determined from monochromatic single crystal diffraction data.

If white light is used, the diffraction pattern will consist of an array of elongated spots or "pencils" of diffracted light. The Bragg condition is satisfied all along the length of the "pencil" but for different values of Î» . When imaged with an image plate, white beam diffraction will also produce a pattern of spots, but initially we do not know which Î¸ and Î» pair produced diffraction at each spot thus the d-spacing cannot be calculated. What can be determined is the angles between the "pencils" of diffracted light. With careful calibration of the position of the detector, the angles between all the spots can be compared with the angles between diffraction directions of candidate phases and the crystal structure and the orientation of the crystal can be determined. (Figure 6 - White beam Laue pattern.) 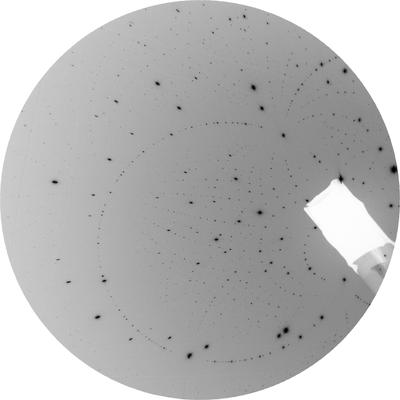 Choosing the right experiment for your purpose

The most common use of diffraction in mineral physics experiments to monitor the dimensions of a crystal lattice as pressure, temperature and or stress state are changes. The lattice being monitored may be the material being studied or it may be a calibrated standard material with a well-known EOS that is being used to measure pressure.

Compounds with well-known equations of state, commonly used as pressure gages during high pressure diffraction experiments include NaCl, MgO, and Au. In addition to having a precisely determined equation of state an important characteristic of an appropriate pressure gage is that its lattice spacing changes enough to be measured accurately over the pressure range at which the experiment is being conducted. Thus the resolution of the diffraction technique being used is important as well as the particulars of the EOS of the pressure standard.

Diffraction is used to observe the state of the sample at high temperature and pressure. Since the lattice parameters can be measured with diffraction it can be used to measure the volume of the lattice and thereby determine the equation of state of a mineral. Diffraction can also be used to detect phase transformations, measure the stress in a sample and observe the defect microstructure (e.g. Lang Topography).