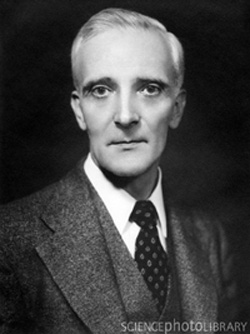 Hide
In his early years Léon Nicolas Brillouin (1889-1969) studied the quantum theory of solids. His thesis advisors were Paul Langevin, Marie Curie, and Jean Perrin. He also studied the propagation of monochromatic light waves and their interaction with acoustic waves, i.e., scattering of light with a frequency change, which is known as Brillouin spectroscopy. Brillouin emigrated during World War II to the US, where he worked at Columbia University.
--- Image courtesy Emilio Segre Visual Archives. American Institute of Physics. All rights reserved.
What is Brillouin scattering?

In classical physics, Brillouin scattering can be described as reflection of the incident light from a three-dimensional diffraction grating produced by periodic density variations (refraction index changes) in a material due to propagating sound waves. Since the wave is traveling with the speed of sound, the scattered light frequency changes, too, it experiences a Doppler shift.

Hide
The Doppler effect (or Doppler shift) is named after and was proposed by the austrian physicist Christian Doppler in 1842 in Prague, Czech Republic. It describes the frequency change of a wave for an observer moving relative to the source of the wave.

During the approach of a wave at the observer the received frequency is higher than the emitted frequency, it is identical when the wave passes by, and it is lower during the decay of the wave.

When the source of the waves is moving toward the observer, each successive wave is emitted from a position closer to the observer than the previous wave; each wave takes less time to reach the observer. The time between arrivals of waves at the observer is reduced, causing a frequency increase.

From a quantum physics perspective, Brillouin scattering is an interaction between an electromagnetic wave and a density wave (photon-phonon scattering). Thermal motions of atoms in a material (e.g., solid, liquid) create acoustic vibrations, which lead to density variations and scattering of the incident light. The scattering is inelastic, which means that the kinetic energy of the incident light is not conserved (as in the case of elastic scattering) but the photon either loses energy to create a phonon (Stokes, kS= kI+ q, ωS = ωI+ ωq), or gains energy by absorbing a phonon (Anti-Stokes, kS= kI- q, ωS = ωI-ωq). Q and ωq are the wave vector and frequency of the phonon, and kS, ωS, kI and ωI are the wave vectors and frequencies of the scattered and incident photon, with 107 Hz < ωq < 1012 Hz. 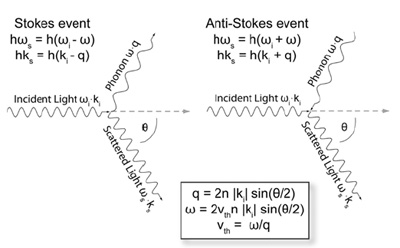 Hide
There are two types of inelastic interaction between incident radiation and the vibrational modes in a crystal, as represented by phonons. In each case, a quantum of energy ho is exchanged. In a Stokes event the energy is transferred to the phonon, and the energy of the scattered radiation is reduced. In an anti-Stokes event, the energy is transferred from the phonon to the radiation, which is thus increased in energy. In the figure, h is Planck's constant; ω circular frequency, k photon wave vector, q phonon wave vector; y scattering angle; n refractive index; νth acoustic velocity. (--- Image courtesy H. Marquardt.

The frequency and path of the scattered light differ from those of the incident light. The magnitude of the photon frequency shift (ωB, Brillouin shift) depends on the wave length of the incident light (λ0), the refractive index (n) of the sample, the angle θ between incident and scattered light, and the phase velocity of the acoustic wave; it is equal to the energy of the phonon and can be used to measure the latter by analyzing a characteristic Brillouin spectrum, where only modes lying close to the Brillouin zone center are investigated (Q=0).

What is the difference to Raman spectroscopy?

Raman scattering also describes the inelastic scattering interaction of light with vibrations of matter. However, while Brillouin scattering involves the scattering of photons from low-frequency phonons, in Raman spectroscopy photons are scattered by interaction with vibrational and rotational transitions in molecules, and the frequency shift and material information are very different. While Brillouin spectroscopy measures the elastic behavior of a sample using an interferometer, Raman spectroscopy determines the chemical composition and molecular structure of a material using either an interferometer or, e.g., a dispersive (grating) spectrometer.

Brillouin spectroscopy is the most frequently used technique for measurements of single-crystal elastic properties of materials of geophysical interest. Elastic properties describe the temporary reversible volume and shape changes that occur when stresses are applied to a mineral and thus allow the calculation of the seismic wave velocities (seismic properties of the Earth) and the change in density that occurs when minerals are under extreme conditions (pressure and/or temperature). Seismic velocities (VP, VS) are related to the density (ρ), bulk (K) and shear (µ) moduli of a material.

The first Brillouin measurements of geological importance were carried out by Don Weidner and colleagues in 1975 [ref. 14]. In combination with the diamond anvil cell, phases that are stable at high pressure and high temperature can be investigated. The first experiments at very high pressure were performed by Bill Bassett and Edward Brody in 1977 [ref. 15]. If in addition combined with synchrotron radiation sound velocities and a material's volume (density) can be studied simultaneously.

The relationship of acoustic velocity (ν), phonon wave vector (q) and phonon frequency (ωq) is given by:

Acoustic velocities are related to elastic moduli and density of the sample, ν2 = c / ρ.

Hide
A) General schematic for most light-scattering experiments. Laser light hits the sample and the scattered light is analyzed., B) A more complete diagram of a Brillouin-scattering experiment using a sample at high pressure in a DAC. PC = personal computer; PMT = photomultiplier tube; FPC = Fabry-Perot controller; BS = beam splitter.
--- Image taken from Bass et al. (2008) Elastic properties of minerals: a key for understanding the composition and temperature of earth's interior. Elements, 4, 165-170.
A Brillouin system consists of a light source (laser), a sample on an orientation device (e.g., a three-circle Eularian cradle), a high-contrast analyzer (Fabry–Perot interferometer) resolving the very small frequency shift of the scattered light, and a computer. The orientation device is used to vary the sample orientation in order to measure different phonon directions, i.e. velocities, and thus improve data quality (reduce uncertainties) and collect necessary data to determine all single-crystal elastic moduli.

Interferometry is based on wave superposition. A Fabry-Pérot interferometer in particular is made of two parallel mirrors, where multiple light reflections between the two surfaces infer light wave interference. When two waves with the same frequency combine, the resulting pattern is determined by the phase difference between the two waves. Depending on the wavelength of the light, the angle the light travels between the reflecting surfaces, the thickness of the mirrors, and the refractive index of the material waves that are in phase will experience constructive interference (transmission peak maximum), while waves that are out of phase will experience destructive interference (transmission peak minimum). In an interferometer a single incident beam of coherent light is split into two beams by a grating or a partial mirror. The two beams will travel a different a path until they are recombined before arriving at a detector. The difference in the distance traveled by each beam creates a phase difference between them, which creates an interference pattern.


The intrinsic precision of Brillouin measurements is on the order of 0.1–0.5%. Typical frequencies of acoustic waves probed are in the range of tens of GHz. The accuracy of the elastic moduli determination can be in the order of 1%. In combination with a diamond anvil cell high-pressure Brillouin studies possible (to pressures > 100 GPa). High-temperature measurements can be performed using resistively heated DACs (to ~1700 K) or with CO2 laser heating (up to 3000K).

In the experiment monochromatic laser light is focused on a sample. The transparent sample can be either a well-sintered polycrystalline material or a single-crystal with highly-polished parallel (within a few hundredth of a degree) faces. A fraction of the incident light interacts with acoustic vibrations and induces Stokes and Anti-Stokes scattering. The frequency and intensity of the scattered light are measured by an interferometer. 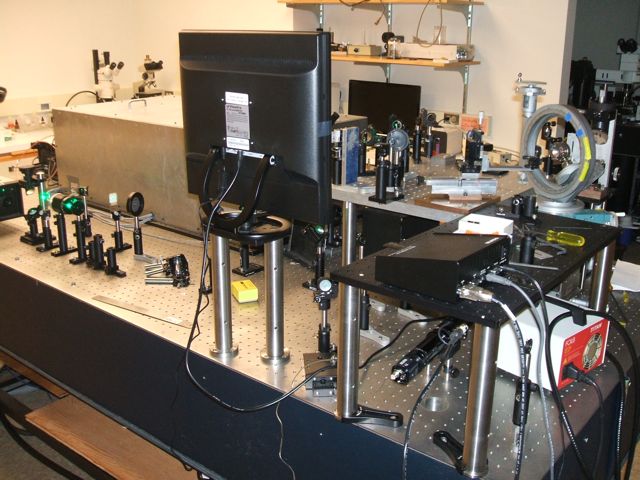 View 2 of the Brillouin system in the Bass lab 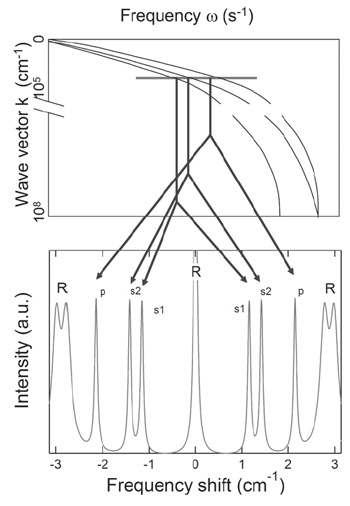 Hide
Dispersion curves for the acoustic modes in a general direction of a single crystal, along with the Brillouin spectrum. The central strong peak, R, is the elastically scattered light peak (Rayleigh peak). The peaks s1 and s2 correspond to the slow and the fast shear acoustic modes respectively, and p to the longitudinal acoustic mode. Note that the higher frequency modes give rise to higher Brillouin shifts. --- Image taken from Angel, R.J., Jackson, J.M., Reichmann, H.J., Speziale, S. (2009) Elasticity Measurements on Minerals: a Review. European Journal of Mineralogy, 21, 525-550.
A characteristic Brillouin spectrum shows measured intensity against measured frequency. The incident light beam is chosen to be the center of the spectrum, which is the Rayleigh scattering peak (elastically scattered light). A typical spectrum also consists of additional peak pairs at higher and lower frequencies of the Rayleigh peak, that are caused by the velocities of three mutually perpendicular acoustic wave polarizations (one longitudinal (compressional) mode, two transverse (shear) modes). While characteristic Brillouin spectra of fluids reveal only a single peak pair due to longitudinal waves, spectra of isotropic solids show two peak pairs, one longitudinal mode and one shear mode (two shear modes in isotropic media have equal frequencies) and spectra of anisotropic solids contain three peak pairs due to different acoustic wave velocities measurable in different directions.


How to determine elastic properties from a Brillouin experiment?

Elastic moduli of a material are related to the acoustic wave velocities and can be calculated using the following equation:

where ρ is the material density, lj,l are the wave direction cosines, ν is the velocity, Uk represents the atom displacements (polarization), and δik is the Kronecker delta (δij = 1 for i = j, δij = 0 for i ≠ 0) .