Many physical properties of crystalline materials are direction dependent because the arrangement of the atoms in the crystal lattice are different in different directions. If one heats a block of glass it will expand by the same amount in each direction, but the expansion of a crystal will differ depending on whether one is measuring parallel to the a-axis or the b-axis. For this reason properties such as the elasticity and thermal expansivity cannot be expressed as scalars. We use tensors as a tool to deal with more this complex situation and because single crystal properties are important for understanding the bulk behavior of rocks (and Earth), we wind up dealing with tensors fairly often in mineral physics.

What is a Tensor

A tensor is a multi-dimensional array of numerical values that can be used to describe the physical state or properties of a material. A simple example of a geophysically relevant tensor is stress. Stress, like pressure is defined as force per unit area. Pressure is isotropic, but if a material has finite strength, it can support different forces applied in different directions. Figure 1 below, illustrates a unit cube of material with forces acting on it in three dimensions. By dividing by the surface area over which the forces are acting, the stresses on the cube can be obtained. Any arbitrary stress state can be decomposed into 9 components (labeled σij). These components form a second rank tensor; the stress tensor (Figure 1). 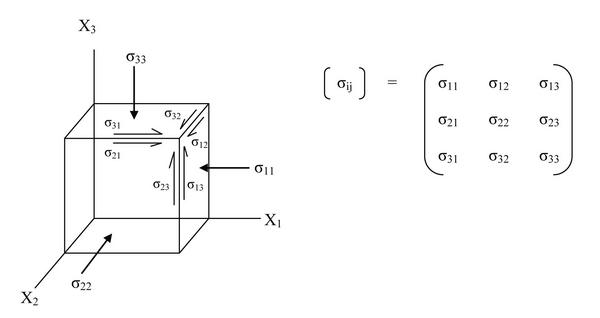 Tensor math allows us to solve problems that involve tensors. For example, let's say you measure the forces imposed on a single crystal in a deformation apparatus. It is easy to calculate the values in the stress tensor in the coordinate system tied to the apparatus. However you may be really interested in understanding the stresses acting on various crystallographic planes, which are best viewed in terms of the crystallographic coordinates. Tensor math allows you to calculate the stresses acting on the crystallographic planes by transforming the stress tensor from one coordinate system to another. Another familiar tensor property is electrical permittivity which gives rise to birefringence in polarized light microscopy. You are probably familiar with the optical indicatrix which is an ellipsoid constructed on the three principle refractive indices. The refractive index in any given direction through the crystal is governed by the dielectric constant Kij which is a tensor. The dielectric constants "maps" the electric field Ej into the electric displacement Di :

Were k0 is the permitivity of a vacuum. Di can be calculated from Ej as follows:

So you can see that even if E1 is the only non-zero value in the electric field, all the components of Di may be non-zero.

Rank of a Tensor 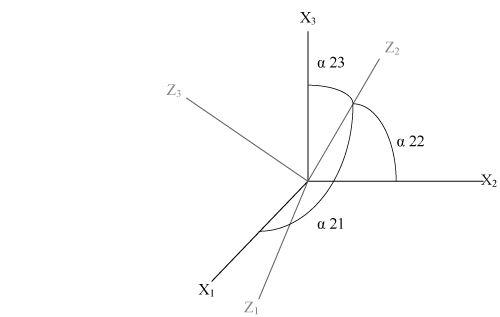 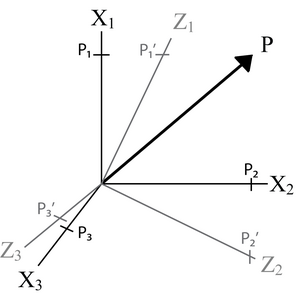 To abbreviate, we replace the cosα with "a" (e.g cosα21 = a21) and notice that each equation can be rewritten as:

which can be further condensed to:

If we utilize Einstein's summation convention, we can leave out the summation symbol and get:

There is a similar process for transforming a second rank tensor, but calculating a formula for the transformation by the same means that we transformed the vector above would be quite laborious. There is a more convenient shortcut. Just as the dielectric constants "maps" the electric field Ej into the electric displacement Di, we can imagine a second rank tensor Tkl that takes Ql and produces Pk in a given coordinate system:

We already know how to transform Pi into Pk:

which we can then substitute into the equation above and get

The tensor we are looking for is T′ij:

A valuable tool in tensor math is the identity tensor, which is referred to as the Kronecker delta:

It is abbreviated as:

Stress is defined as force per unit area. If we take a cube of material and subject it to an arbitrary load we can measure the stress on it in various directions (figure 4). These measurements will form a second rank tensor; the stress tensor. 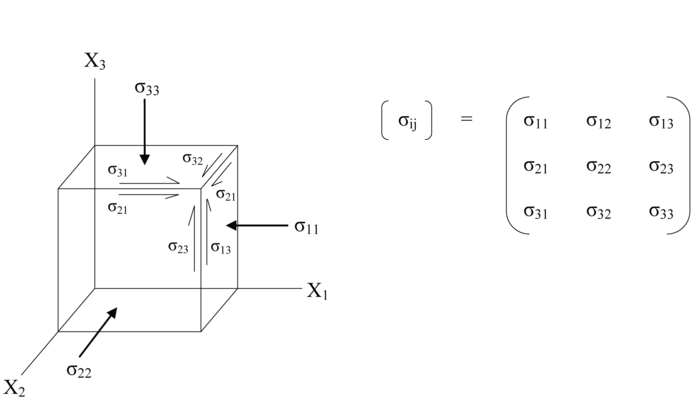 The Eigen values of σij ; represented as σ1 , σ2 , σ3 are referred to as the principle stresses. 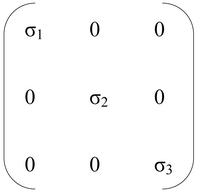 An important property of the stress tensor is that it is symmetric:


Intuitively, this can be seen if one images shrinking the cube in Figure 4 to a point. If the cube is infinitesimally small, the forces across each face will be uniform. If the cube is to remain stationary the normal forces on opposite faces must be equal in magnitude and opposite in direction and the shear tractions which would tend to rotate it must balance each other. So for example, if σ13 is not equal in magnitude to σ31,the cube will spin around the X2 direction. Therefore, it is only necessary to find 6 of the components of the tensor.

Important concepts are often used are deviatoric stress and hydrostatic pressure. Any stress tensor may be broken into two parts

Using the Kronecker delta notation this may be written as

Strain is defined as the relative change in the position of points within a body that has undergone deformation. The classic example in two dimensions is of the square which has been deformed to a parallelepiped. 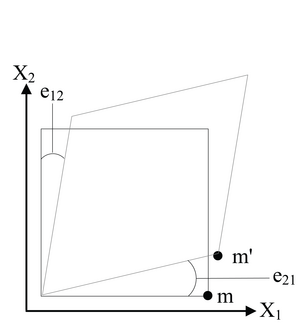 Let us examine the movement of a point on the corner of the square (m) which moves to (m'): 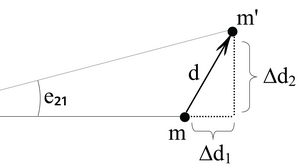 In order for this analysis to work we must only consider infinitesimally small strains. We will call the original length of the side of the square X1. We will call the component of the displacement (d) of m to m' resolved onto the X1 axis Δd1and the amount of the the component of d resolved onto the X2 axis Δd2.A simple way to measure the strain would be to compare Δd1 with X1 and Δd2 with X1, etc.

We can represent this quantity by e11


For very small angles tanϴ = ϴ and therefore e21 = ϴ. Now imagine that instead of being deformed, the initial square had been simply rotated around the origin, the values eij i≠j would still be non-zero. For this reason, strain is characterized by a tensor ϵ ij from which the rigid body rotation has been subtracted. Therefore we can write:

where ῶij is the rigid body rotation andϵ ij is defined as the strain.

For the two-dimensional case:

The tensor ϵ ij has Eigen values which are called the principal strains (ϵ1, ϵ2, ϵ3). The Eigen vectors lie in the three directions that begin and end the deformation in a mutually orthogonal arrangement. If the Eigen vectors are initially of length 1 then in the end they are length:


If we substitute the new dimensions into the equation for the sphere in this particular reference frame:


This is the equation of an ellipsoid, which is called the strain ellipsoid. Often geologists will use statistical studies of the shapes of pebbles, certain types of sand particles, and other natural objects which were probably originally round, to determine the strain which a particular body of rock has undergone.

Unlike stress and strain, elasticity is an intrinsic property of a material. The elastic properties of Earth materials affects everything from the variation of density with depth in the planet to the speed at which seismic waves pass through the interior. Ultimately the elastic properties of a material are governed by the arrangement and strength of the bonds between the atoms that make up the material. Elasticity is the property of "reversible deformation". If the deformation in a body under stress does not exceed a certain limit, called the elastic limit, the body will return to its initial shape when the stress is removed. If the amount of stress (σ) is infinitesimaly small then the amount of strain (ϵ), which is also infinitesimal, is linearly proportional to the strain and may be written as:

To calculate ϵij for the three-dimensional case we would begin like so:

Notice that even if all σij = 0 except σ11, that most ϵij ≠ 0 . This can be seen if you take a square and pull on it from only one direction; 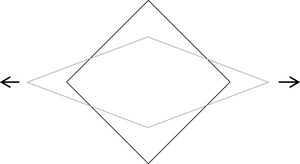 it strains in all directions.
For the three-dimensional case there are 81 terms in a fourth rank tensor. However, both stress and strain are symmetric tensors; σij = σji and ϵij = ϵji each only has 6 independent terms. There are only 6 equations needed to calculate ϵij from σij and in each equation there will only be 6 independent terms. Therefore, there can be no more than 36 independent values in Sijkl. For convenience, a matrix notation is used. The subscript is broken into two parts:

and abbreviated as follows:

To avoid the appearance of factors in the equations, the following factors are introduced into the matrix notation:


In matrix notation the equation for obtaining strain from stress is:


and stress from strain is:


The compliances and stiffnesses are written as an array; for example for Sij 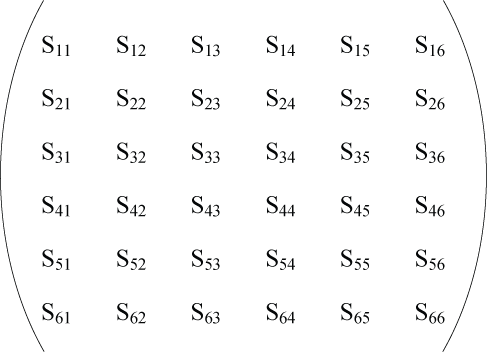 As I mentioned above, ϵij and σij are symmetric and therefore the number of independent coefficients is reduced from 81 to 36. Because of "compatibility relations," which say that material will deform continuously, the number is reduced to 21. If the material being deformed is symmetric the number of coefficients is even further reduced. For an isotropic material, one that behaves the same in any orientation, there are only two quantities necessary. These are Young's Modulus E, and G the Shear Modulus; all the coefficients may be expressed in terms of them.

where ν is Poisson's Ratio

Therefore, for an isotropic material:

From these equations it becomes obvious that for isotropic materials the directions of the principal stresses are the same as those for the principal strains. If a polycrystalline rock is large compared to the size of its constituent grains and does not have a preferred crystallographic orientation it will in general behave as an isotropic solid. 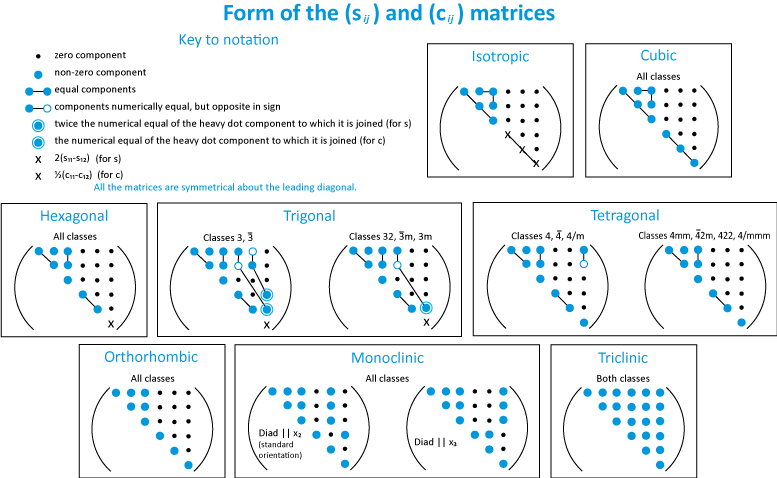