Please introduce yourself here. You can also post files and links to relevant data, tools, or projects that you want to share.

Hi all, Brooke here. I've begun some of the work on the DataSheet, but I definitely need everyone's input!

Session 1—Meet your team members, Learn about the data, tools, and expertise represented on your team

Team members meet each other and share their experiences and viewpoints on using data in education. Data representatives and software tool specialists introduce one or more datasets and tools and the group explores various aspects of them. If the team's DataSheet is not yet posted, the data representative should attach it .

Earth Observatory article on the relationship between NO2 and ground level O3:

Here's a link to a .kml file which displays population density in GoogleEarth http://bbs.keyhole.com/ubb/showflat.php?Number=221440

Aerosol index = a bit of everything, shows transport, forest fires; natural/man-made, could ground-truth by collecting samples of aerosols/particulates (Vaseline on slide),

- chemistry involved may be much for lower grade levels - limited application? - Localized (monitor changes over time) - Related to population density (anthropogenic) - Could layer population and NO2 data

Hey guys. I'm trying to attach the data sheet (that I've updated), but I can't get it to attach. We may need to share the file electronically some other way.

Review and discuss the DataSheet that was begun by the data representative(s) for your team. Decide which team members will contribute to completing various fields.

Brainstorm a set of possible storylines for valid investigations of the dataset. The goal is to come up with at least one compelling scenario that will give users a reason to work through the technological steps necessary to perform some analysis of the data.

"Case Study" Background information: Mention where NO2 comes from (result of combustion); It is a major ingredient in air pollution (that can lead to smog); NO2 facilitates the production of other hazardous pollutants (including O3, PANs, nitric acid in the human body).

Here's the link to the power company and their outputs: http://www.srpnet.com/about/stations/fourcorners.aspx

Part I: Data and tool familiarity

Part II: Examine trends in population density and NO2 data for the US

Use the complementary expertise on the team to check that the task you are envisioning can actually be completed in an educational setting. Identify a target grade level for the activity and choose a working title.

Case Study Development
Record ideas, bullet points, or actual text that will become part of the case study to introduce users to the issues and concepts of the activity. Gather links for appropriate images, diagrams, and background text.

Data Access and Analysis Procedures
Record the name(s) and URL(s) of dataset(s) and access/analysis software tool(s) to be used. List the major tasks users will complete then perform a deliberate walk-through of each task to capture the full sequence of procedures. Give special attention to the most difficult or least intuitive steps, and note points in the sequence where additional information will be helpful.

NOTE: Teams can capture notes directly in the wiki pages or choose to work in a Word document. This activity outline guide (Microsoft Word 35kB Feb1 13) will clarify the scope of the activity outline and the minimum information required.

a picture of smog for the case study: 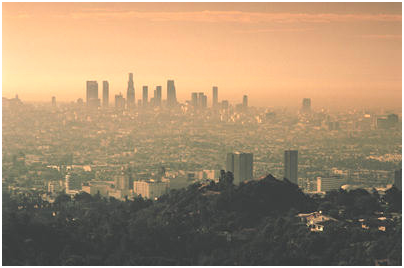 Sources of NOx from the EPA: 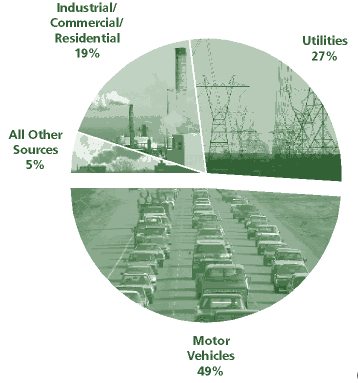 Background on NO2: What it is, how it's formed, & how it relates to pollution

New Ways of Looking at NO2 data: EOS Aura data on google earth (screenshot of data)

Part II: What trends are there across the US?

Step 1. Turn on both the NO2 file from February, 2006 and the Population Density file.

Step 2. Use the slider tool to change the transparency of the Population Density data set.

Step 3. Make observations about the relationship between Population Density and the NO2 concentrations.

-Is there an obvious relationship between the two data sets?

-Are there differences in the NO2 data according to geographic region (for example, east coast versus west coast)?

Part III. NO2 in Phoenix, Arizona

Step 1. In the search box, type in the location "Phoenix, AZ" and hit enter. You will now be looking specifically at the area surrounding Phoenix, AZ.

-Do the NO2 data for Phoenix fit your previous observations about the relationship between population density and NO2 concentrations?

Step 1. Turn off the NO2 and Population Density layers.

-Make predictions about the following:

Step 3. Turn the NO2 and Population Density layers back on.

Step 4. Compare the NO2 data and Population density data for this area.

-What do the NO2 concentrations look like for this area?

-What does the population density look like for this area?

-How do the data compare to your predictions?

-Does this location fit the same pattern as have been previously recognized? Why or why not?

-What recommendations could you make to help reduce NO2 pollution from emissions?

-Given that the technology exists to reduce NO2 emissions from fuel combustion, why do you think more isn't being done to mitigate this problem?

-Given that fuel combustion leads to NO2 pollution, what are some alternative clean air energy sources that can be used instead?

Session 5—Flesh out procedures with "About" sections to build users' knowledge about the data and tools, List several "Going Further" ideas

Step 1. Turn off all data layers (NO2 and population density).

Step 2. Go to Ohio by tying in "Ohio" in the search bar and hitting enter.

Step 3. Turn on the Population density and January 2006 NO2 layers.

-What pattern do you recognize between the population density and the NO2 layers?

-Does this pattern resemble Phoenix or the Four Corners Power Plant?

Step 4. Turn off the Population density layer and turn on the January 2006 layer.

-What changes do you observe between the NO2 concentrations in January and May?

-In this region, when is the highest NO2 output from the power plants?

-Why do you think the changes are what they are?

Session 6—Finalize your Activity outline and DataSheet, Generate PowerPoint slides for the report out session, Attach all resources to this wiki page

Create a 2- or 3-slide ppt file for the report out session.

Name your powerpoint file with this exact name: NASAAura.ppt
Attach the file to this page.
Once your file is posted, we'll use this link to access it during the report out session: NASAAura.ppt (PowerPoint 418kB Feb1 13)

Attach any other documents produced by the team as well as finalized versions of the team's DataSheet and add a reference to them in the text box.

A couple notes about the tool: Google Earth Produced by: Google Cost: Free

More Notes: GoogleEarth provides an uncomplicated means of combining satellite imagery with geological and geographic information in dramatic fashion. The tool provides user numerous ways to manipulate the view of the Earth such as zooming in and out, rotating, and tilting.