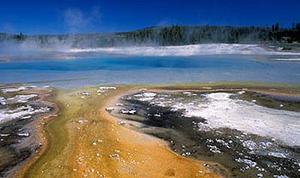 Hide
The expansive Sunset Lake of the Black Sand Basin is one of the largest thermal bodies of water in the Park. The intensely blue lake occasionally erupts. Only hyperthermophiles are able to survive in this nearly boiling pool. The runoff channel is characterized by yellow, orange and green communities. Image by Brett Leigh Dicks. This image has been selected from 'Microbes of Yellowstone' by David Patterson, Kathy Sheehan, Brett Leigh Dicks and Joan Henson, provided courtesy of the microscope website.

With over 10,000 geothermal features including hot springs, mudpots, fumaroles, and geysers, Yellowstone National Park provides vast habitats for a wide variety of thermotolerant and thermophilic organisms. Yellowstone's geologic setting serves as the driving force behind its numerous geothermal features. The center of Yellowstone is a caldera which covers a large portion of the central area of the park. Volcanic activity below the caldera and the surrounding area releases tremendous heat to drive the hot springs, geysers, and other features. Groundwater from snow melt and other precipitation in the greater Yellowstone area is heated by molten rock below the surface. Once heated, the water finds a path through cracks and fissures of lava flows to the surface, where it emerges in geysers, hot springs, mudpots, and fumaroles. 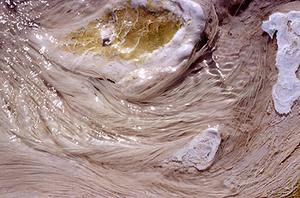 Microscopic life thrives in Yellowstone's geothermal features. Many thermophiles take up residence in the extremely hot pools of water or colonize the sometimes slightly cooler runoff channels of these features. Thermophilic communities form and grow in geothermal features in a number of ways. Some species will form long, flexible structures called streamers in the fast-flowing water of runoff channels. Certain thermophilic species can also form mats or layers of archaeal and bacterial communities that are adapted to specific temperature and light conditions within the mat. Thermophlic bacteria and archaea are often brightly colored by photosynthetic pigments (chlorophylls or carotenoids) and show distinct zonations according to their specific temperature tolerances. 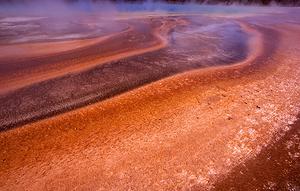 Hide
Thermophile mats at Grand Prismatic, Midway Geyser Basin. Grand Prismatic is the largest hot spring in the park and the third largest in the world. Only hyperthermophilic bacteria and archaea are able to live in the nearly boiling water of this hot spring. These extensive orange and brown microbial mats show distinct zonations according to their specific temperature tolerances. NPS photo taken by J. Schmidt courtesy of the [linkhttp://www.nps.gov/features/yell/slidefile/thermalfeatures/ 'Yellowstone Digital Slide File'].

In addition to their extremely high temperatures, many of Yellowstone's geothermal features exhibit other environmental extremes such as extremely acidic or alkaline waters, or extremely high sulfur or calcium carbonate content. These geothermal areas which vary from site to site contain one of the planet's greatest concentrations of thermophilic biological diversity, including many species that have yet to be identified.

Microorganisms living in hot springs were first discovered in Yellowstone; in 1966 Dr. Thomas Brock discovered the microorganism Thermus aquaticus. Since then, many more have been discovered and characterized, and this has led to significant scientific and economic benefits. In 1985, a synthetically reproduced heat-stable enzyme from T. aquaticus proved substantially beneficial to the DNA fingerprinting process, also earning the patent holder hundreds of millions of dollars. After this discovery, bioprospecting for new thermo-tolerant species by research groups dramatically increased in geothermal areas across the world, including Yellowstone. Continual increases in bioprospecting led to a benefits-sharing agreement between Yellowstone and the Diversa Corporation, which ensures that a portion of future profits from research in Yellowstone National Park will go toward park resource preservation. Thermophile research in Yellowstone has also proved benefical to the field of astrobiology. Many scientists believe that thermophiles are most closely related to the primordial origin of life and can provide insight into early Earth as well as expand possiblities for life elsewhere in the universe. As of 2004, more than one dozen scientific research projects were underway, some of which involve NASA, universities and corporations.

Octopus Spring: Octopus Spring is a partially alkaline, low-carbonate, low-sulfur hot spring located in the Lower Geyser Basin of Yellowstone National Park. It is home to a variety of thermophiles, as well as a colorful array of microbial mat communities.

General Collection: Resources such as news articles, web sites, and reference pages provide a comprehensive array of information about thermophiles.

Iceland: Situated along the mid-ocean ridge of the Atlantic Ocean, Iceland is a geologic "hot zone". Thermophiles can be found colonizing a variety of geothermal features including hot springs, mudpots, fumaroles, and geysers.

Kamchatka: The Kamchatka Penninsula, located in far east Russia, is a recent "hotspot" for thermophile research with over 30 active volcanoes, numerous geothermal features, and a constantly evolving landscape.


For additional resources about Thermophiles, search the Microbial Life collection.