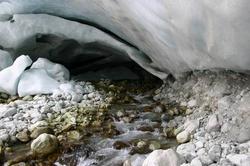 Hide
Subglacial stream flowing from the Glacier du Mont Mine, Swiss Alps. The water temperature is less than 1ºC, yet viable and culturable microorganisms have been isolated from this stream. Photo by S. Montross

Psychrophiles are commonly described as microorganisms which exhibit a growth temperature optimum of 15°C and lower. The recent discovery of cold-tolerant microorganisms in glaciated and permanently frozen environments has broadened the known range of environmental conditions which support microbial life. Psychrophilic bacteria belong to four phylogenetic groups, the alpha and gamma subdivisions of the Proteobacteria, the Flexibacter-Bacteroides-Cytophaga phylum and the gram-positive branch. Isolates from cold environments include Arthrobacter sp., Psychrobacter sp., and members of the genera Halomonas, Pseudomonas, Hyphomonas, and Sphingomonas

Why are psychrophiles COOL?

Recent investigations have shown psycrophily is more prevalent than previously believed. Psychrophilic bacteria are represented in all three domains of life, many of these organisms are methanotrophs, sulfate reducers, iron oxidizers, and methanogens.

-enzymes that continue to function, albeit at a reduced rate, at near freezing ambient temperatures

-the ability to produce proteins that are stable at cold temperatures

General Collection: Resources such as news articles, web sites, and reference pages provide a comprehensive array of information about psychrophiles.

For additional resources about psychrophiles search the Microbial Life collection.