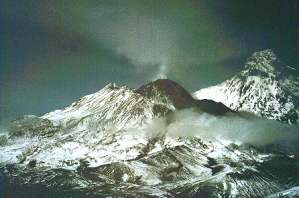 Hide
Bezymianny is one of Kamchatka's many active volcanoes. Located in the central-eastern area of the peninsula, it is situated among many other volcano giants including Kliuchevskoi, to the right of Bezymianny in the photo. Bezymianny's first recorded eruption in 1955-57 was on the scale of the 1984 eruption of Mt. St. Helens and has since erupted 34 times, usually erupting once or twice a year. Thermophiles can commonly be found colonizing the newly formed hydrothermal vents in areas of volcanic eruptions. USGS photo taken by Jack Lockwood.

Kamchatka is a 1,500 kilometer long peninsula in far eastern Russia, roughly the size of Germany, Austria, and Switzerland combined. With 30 active volcanoes, geothermal features such as geysers and hot springs, and a constantly evolving landscape, this area is called "the land in the making." Because of its variety of geothermal features and its pristine condition, Kamchatka has been a recent "hotspot" for thermophile research.

The Kamchatka Peninsula was discovered 300 years ago by Russian Cossaks but has remained untouched, neither developed nor studied, for a number of reasons. In its early history, the remoteness and ruggedness of Kamchatka prevented many from exploring the new land; it took travellers more than a year to reach Kamchatka. In its most recent history, the Kamchatka area held strategic military importance and was a highly secured military region during the Cold War. It is only recently that Kamchatka has become open and accessible to the West.

Scientists are interested in the geothermal features at Kamchatka because they differ from other geothermal areas like those in Yellowstone National Park. Teh pristine nature of Kamchatka gives scientists access to a variety of recently formed and untouched geothermal features. In addition, Kamchatka's hot springs are at a relatively low elevation, unlike the hot springs of Yellowstone. This allows the water in the hot springs to reach a higher temperature before boiling. Just a few degrees can make a significant difference for microbes. The microbes at Kamchatka withstand some of the hottest temperatures in the world. With Kamchatka's many unique features, many scientists are hopeful for the discovery of unique microorganisms thriving in Kamchatka's hot springs. Current research at the Kamchatka Microbial Observatory, led by Dr. Juergen Wiegel of the University of Georgia (UGA), aims primarily to characterize unique and so far unknown microorganisms as well as to understand and correlate geochemical and microbial interactions in the hydrothermal systems.

In addition to its potential for thermophilic life, the Kamchatka Peninsula contains a wealth of natural resources and biological diversity including extinct and active volcanoes, several mountain ranges, alpine meadows, rivers, lakes, waterfalls, and rare fish, bird and animal species. In an effort to preserve this ecological and natural treasure, the first Natural Parks of Kamchatka were established in 1996.

Iceland: Situated along the mid-ocean ridge of the Atlantic Ocean, Iceland is a geologic "hot zone" Thermophiles can be found colonizing a variety of geothermal features including hot springs, mudpots, fumaroles, and geysers.


For additional resources about Thermophiles, search the Microbial Life collection.