There are no precise definitions of what characterizes an alkaliphilic or alkalitolerant organism. Several microorganisms exhibit more than one pH optimum for growth depending on the growth conditions, particularly nutrients, metal ions, and temperature... Therefore, the term "alkaliphile" is used for microorganisms that grow optimally or very well at pH values above 9, often between 10 and 12, but cannot grow or grow only slowly at the near-neutral pH value of 6.5.

Mark Twain once referred to the alkaline Mono Lake as "nearly pure lye" and commented that it contained "nothing, in fact, that goes to make life desirable." 125 years later, scientists have shown that the lake is actually teeming with an abundant diversity of microbial life. Microbes have been found thriving in many other alkaline environments as well, including the slag dumps of the Lake Calumet region in southeast Chicago, Octopus Spring in Yellowstone National Park, and the East African Rift Desert. 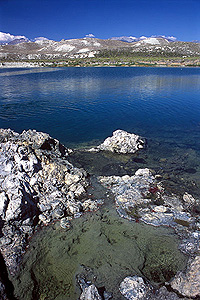 Hide
Paoha Island is the largest of several islands in Mono Lake. A hot water spring lies in the vicinity of Hot Spring Cove, and the outflow includes green mats. The water is locally or occasionally a strong red color&acirc;&#128;&#148;caused by a bacterium believed to be Halobacterium. The spring flows into the very saline and alkaline Mono Lake. Image taken by Brett Leigh Dicks and provided courtesy of Marine Biological Laboratory of the University of Chicago web site

Major Challenges in an Alkaline Environment

Cells face many challenges in an alkaline environment. Of greatest significance is the ability to maintain internal pH. If cells are to survive in an alkaline environment, they must make their cytoplasm more acidic to buffer the alkalinity. In addition, enzymes&acirc;&#128;&#148;both excreted and surface located - must be resistant to the effects of extreme pH. Finally, the pH gradient must be reversed to carry out ATP synthesis.

Survival in an Alkaline Environment

What types of adaptations allow organisms to survive these extremely high pH environments? While alkaliphilic taxa have been identified in each of the three domains of Life (Eukarya, Archaea, and Eubacteria), the bioenergetics of alkaliphilic bacteria are perhaps the best understood. 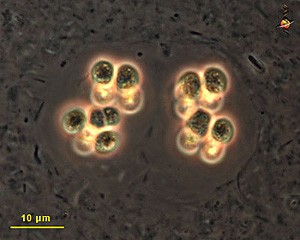 Hide
Microcystis isolated from Alkaline Lake in the Eastern Sierras. Colonies of this blue green alga are embedded in a mucus material - evident because the bacteria in the surrounding environment do not penetrate right up to the cells of the colony. Image taken by David Patterson and provided courtesy of the Marine Biological Laboratory of the University of Chicago web site.

In the first instance of passive pH regulation, some cells have been found to contain cytoplasmic pools of polyamines. Particularly rich in amino acids with positively charged side groups (lysine, arginine, and histidine), these cells are able to buffer their cytoplasm in alkaline environments. Low membrane permeability is another mode of passive regulation as it ensures that fewer protons move in and out of the cell.

Typically, protons enter and leave a cell via diffusion at about the same rate, therefore not having much impact on homeostasis in an extreme pH environment. Some alkaliphilic bacteria, however, have developed sodium ion channels that actively drive the entry of protons across the membrane, thus decreasing the overall pH of the cytoplasm. 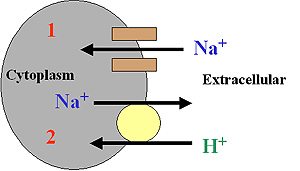 There is evidence that alkaliphiles have evolved pH stable enzymes; these are often used in the manufacturing of detergents.

Reversal of the pH Gradient

Alkaliphilic bacteria compensate for reversal of the pH gradient by having a high membrane potential or by coupling Na+ expulsion to electron transport for pH homeostasis and energy transduction.

Alkaliphilic enzymes have many industrial applications.

Hide
Proteases are a group of enzymes whose catalytic function is to hydrolyze (breakdown) peptide bonds of proteins (also called proteolytic enzymes or proteinases; proteinase K is a common protease used in laboratory DNA extractions). Proteases are extracellular. They are capable of digesting insoluble polymers such as cellulose, protein, and starch. The products of digestion are then transported into the cell where they are used as nutrients for growth.

Alkaline proteases have an optimum pH greater than or equal to 9.0. They hydrolyze proteins and break them down into more soluble polypeptides or free amino acids. Alkaline proteases are the most widely used enzymes in the detergent industry. They remove stains such as grass, blood, egg, and human sweat. For an enzyme to be used as a detergent additive it must be stable and active in the presence of typical detergents ingredients, such as surfactants, builders, bleaching agents, bleach activators, fillers, fabric softeners, and various other formulation aids. While alkaliphilic bacteria are not the only source of alkaline proteases, Bacillus subtilis (neutrophilic) and Bacillus licheniformis (alkaliphilic) are major players in the detergent industry.

In addition to detergent additives, alkaline proteases are used in the hide-dehairing process, where dehairing is carried out at pH values between 8 and 10. These enzymes are also commercially available from companies.

General Collection: Resources such as news articles, web sites, and reference pages provide a comprehensive array of information about alkaliphiles.

For additional resources about Alkaliphiles, search the Microbial Life collection.