Microorganisms that are able to develop under extreme conditions have recently attracted considerable attention because of their peculiar physiology and ecology. These extremophiles also have important biotechnological applications. Acidic environments are especially interesting because, in general, the low pH of the habitat is the consequence of microbial metabolism and not a condition imposed by the system as is the case in many other extreme environments (temperature, ionic strength, high pH, radiation, pressure, etc.).

Acidophiles are organisms that can withstand and even thrive in acidic environments where the pH values range from 1 to 5. Acidophiles include certain types of eukaryotes, bacteria and archaea that are found in a variety of acidic environments, including sulfuric pools and geysers, areas polluted by acid mine drainage, and even our own stomachs.

Hide
Types of acidophiles include the red alga Cyanidium caldarium and the green alga Dunaliella acidophila, which can live below pH 1, as well as the fungi, Acontium cylatium, Cephalosporium sp., and Trichosporon cerebriae, which grow near pH 0. The archean Picrophilaceae are the most acidophilic organisms known and are able to grow at negative pH values. 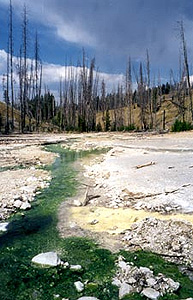 Hide
Lemonade Spring, located in Yellowstone National Park, is bright green in many areas because of the abundance of Cyanidium, the most heat and acid tolerant alga known. Cyanidium is an acidophile and grows at pH as low as 2-3 and temperatures as high as 42 degrees C. Image taken by Kathy Sheehan and provided by Marine Biological Laboratory of the University of Chicago web site

How do acidophiles regulate their pH?

Normally, high acid levels destroy cells. However, acidophiles have evolved a variety of specialized mechanisms to maintain their internal cellular pH at a constant level (usually 7.2). These mechanisms include "passive" regulation (not requiring the cell to expend energy) and "active" regulation (requiring energy).

Hide
Passive pH regulation defenses primarily rely on enforcing the cell membrane against an unfavorable environment. Some microorganisms secrete a biofilm to slow down the diffusion of molecules into the cell, while others are able to change their cell membrane to incorporate substances such as fatty acids that protect the cell. Another important way that microbes passively regulate their pH is by secreting buffer molecules that help to raise pH. Some have also evolved active pH regulation, which gives them the ability to pump hydrogen ions out of their cells at a constantly high rate. By doing this they are able to keep their internal pH at around 6.5—7.0.

Why are they important?

Show more information about sulfur cycling and acid mine drainage

Hide
This microbe is believed to be a key mediator of the process of acid mine drainage, a major environmental problem associated with mining. Some acidophiles, such as Ferroplasma, use sulfur cycling to transform the sulfide found in metal ores to sulfuric acid, the chemical pollutant that contaminates mining sites and drains into nearby rivers, streams and groundwater. These acidophiles are chemolithotrophs, which means that they are capable of using CO2 or carbonates as the sole source of carbon for cell biosynthesis, and derive energy from the oxidation of reduced inorganic or organic compounds. The process of sulfur cycling by chemolithotrophic oxidation of sulfur in oxic habitats produces sulfuric acid (SO42- + 2 H+ = H2SO4). Acidophiles are tolerant of the resulting acidic conditions, although the production of sulfuric acid is detrimental to other microorganisms, plants, and animals.

Gastrointestinal pathogens and human health
Other microbes, while not acidophiles, are studied because their acid-resistance systems allow them to survive the low pH in our own stomachs and cause disease. Two such microbes are Escherichia coli, a well-known gastrointestinal pathogen, and Helicobacter pylori, which causes stomach ulcers.

Hide
In contrast, Salmonella spp. are only moderately acid resistant because they lack these extreme acid survival mechanisms and instead have moderately effective acid-tolerance systems. The best characterized acid-resistance system is that of E. coli. The basic strategy involves increasing internal pH, flipping transmembrane electrical potential (thereby imitating an acidophile) and achieving a physiological state where overall metabolic activity is kept at a minimum (Foster 2004). Notably, outbreaks of E. coli disease have also been linked to the ingestion of acidic foods including contaminated apple cider, the pH of which is generally about 3.5. Hence, the acid-resistance system of E. coli is not only equipped to survive low gastrointestinal pH, but also allows it to exploit new vectors of transmission typically inhospitable to other pathogens.

General Collection: Resources such as news articles, web sites, and reference pages provide a comprehensive array of information about acidophiles.

For additional resources about Acidophiles, search the Microbial Life collection.