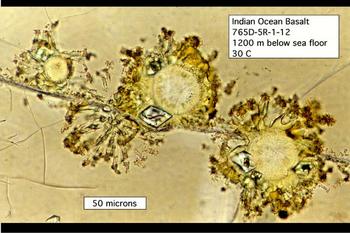 Hide
This image of a rock-eating endolith was taken from a basalt found 1200 m beneath the Indian Ocean floor. Image courtesy of NOAA Ocean Explorer

Endoliths are organisms that live inside rocks or in pores between mineral grains. These creatures are thought to have been found in a large range of environments - from rocks on the Earth's surface to miles beneath the subsurface! There are thousands of known species of endoliths, including members from Bacteria, Archaea, and Fungi. Many endoliths are autotrophs, meaning they are able to make their own organic compounds by utilizing gas or dissolved nutrients from water moving through fractured rock. Others may incorporate inorganic compounds found in their rock substrate (possibly by excreting acids to dissolve the rock).

Where on Earth are Endoliths Found? 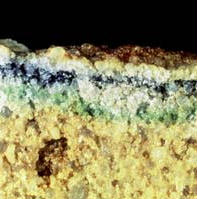 Endoliths have been found in a variety of environments, from the shallow surface to the deep terrestrial and ocean crust. Endoliths are a type of extremophile, which is an organism that thrives in harsh conditions. For more information about extremophiles, visit the Microbial Life Extremophile Collection. 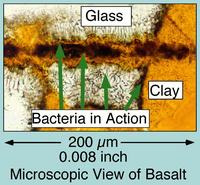 What Are the Implications for Endolithic Life?

Hide
This photo of Bacillus infernus, a hyperthermophile, has been found 20-2800 meters beneath the Earth's surface. Photo courtesy of US Department of Energy- Subsurface Microbial Collection.

Recent work with endolithic geomicrobiology may alter our understanding of life. These microbes expand our understanding about the ability of organisms to survive and even thrive in extreme conditions. They also raise new ideas regarding the possibility of extraterrestrial life. Furthermore, these microbes may alter our ideas about the origin of life on Earth, because they have the ability to live within rock thereby escaping damaging UV rays.

Endoliths may also play a role in environmental issues. For instance, microbes living beneath the ocean floor have been suggested to play a role in the carbon cycle and global warming. Endoliths may also have environmental benefits including bioremediation of contaminated sites and mines and improvement of groundwater quality by converting harmful compounds into non-toxic waste products. In addition, these organisms may be responsible for biomineralization of economically important ores.

General Collection: Resources such as news articles, web sites, and reference pages provide a comprehensive array of information about endoliths for students and non-scientists.

For additional resources about endoliths, search the Microbial Life collection.