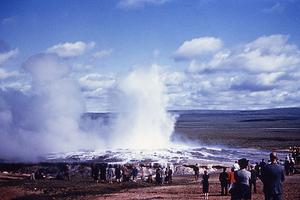 Hide
The Great Geyser, located in the Southwest of Iceland. Less active in recent decades, but will sometimes erupt with a 200-foot jet of steaming water. NPS photo taken by Dr. D.E. White courtesy of the Yellowstone Digital Slide File.

Situated along the mid-ocean ridge of the Atlantic Ocean, Iceland is a geologic "hot zone" with volcanic eruptions, fissure eruptions, shield volcanoes, pillow basalts, glaciers, geothermal features, and more. This island is also home to a variety of thermophilic life, inhabiting numerous geothermal features such as hot springs, mudpots, geysers, and fumaroles. Iceland's geothermal features are driven by the nature of its geologic setting. The combination of a plate boundary and a hot spot are the features that have created Iceland. The mid-ocean ridge of the Atlantic Ocean comes ashore along the Reykjanes Peninsula, in the southwest corner of Iceland, and crosses the country in a north-northeast direction. This plate boundary is marked by a zone of volcanic and seismic activity as it slowly diverges, rougly one centimeter per year. 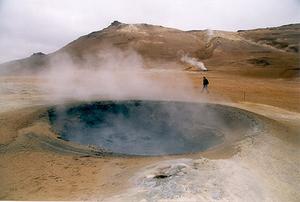 Iceland's geothermal features are common in the volcanic zone along the tectonic plate boundary. Here, groundwater and sometimes seawater seep into the ground and travel through highly fractured bedrock. The water reaches varying depths where it comes in contact with heat from volcanic sources. As the water is heated, it ascends through fissures, crevices, and volcanic crust to emerge in hot springs and other geothermal features.

With varying temperatures and pH values, these geothermal features provide habitats for diverse groups of thermophilic life. The first thermophiles were discovered in 1966 in Yellowstone National Park's hot springs, and soon after the unique properties of these heat-loving microorganisms were discovered and proved to be very beneficial in the field of biotechnology. Currently, the hot springs in Iceland and other geothermal areas around to world are being studied in hopes of discovering unique and unknown species of microorganisms. 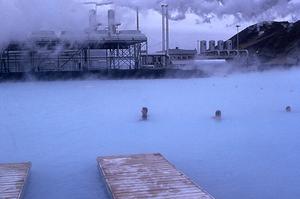 Hide
The "Blue Lagoon," a popular geothermal spa in Iceland. The thermal areas are actually man made, created by run-off from the Svartsengi power plant, which pumps up the geothermally heated water from a full mile below the surface. After being used to generate both heat and electricity, the excess water is ejected into the lagoon. NPS photo taken by Ron Cooksy courtesy of the Yellowstone Digital Slide File.

Long before thermophiles were discovered and geothermal areas became sites for scientific research, geothermal heat was a significant resource in Icelandic culture. The heat and water from sources such as hot springs were used for washing clothes, cooking food, and baking bread in steam boxes. People also constructed pipelines from the springs to their homes, where they built cisterns. An oven would then be placed in the cistern that circulated warm water within the house. Geothermal energy remains a resource in Icelandic society today. The Svartsengi power plant, located near the town of Grindavik on the Rekjanes peninsula, takes advantage of Iceland's abundant geothermal features. The plant utilizes the high temperature geothermal field located along the tectonic plate boundary to produce steam which in turn drives turbines to produce electricity.