Origins of the Universe pcMEL

The Origins of the Universe pcMEL asks students to explore the connections between evidence and competing models about how the Universe began. It is one of the most fundamental and existential questions humans have asked.

×
Origins of the Universe

Provenance: NASA, ESA, and M. Montes (University of New South Wales)
Reuse: This item is in the public domain and maybe reused freely without restriction.
Below are links to resources that will help students use the Origins of the Universe pcMEL to learn more about light spectra and characteristics of a universe changing through time.

This article provides an introduction to the Origins of the Universe MEL build-a-MEL (baMEL). It is useful even if you are using the Origins of the Universe pcMEL with your students. The primary difference between the pcMEL and the baMEL is that with the pcMEL students are given two models and four lines of evidence in a preconstructed diagram where as with the baMEL students choose two models from three and select four lines of evidence from eight to create their own MEL diagram. 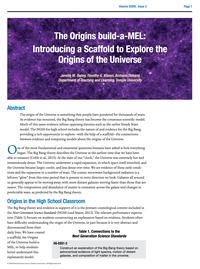 HS-ESS1-2: Earth's Place in the Universe

Model A: Space, time, and matter came into existence a finite time ago in a hot dense state. It has been expanding and cooling ever since.
Model B: The Universe began a finite time ago when a small ball of matter exploded. The matter then spread out throughout space. 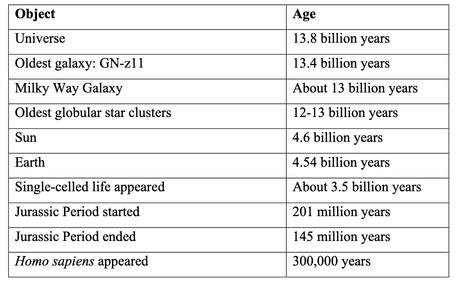 ×
Evidence #3. Table 1. Ages of objects and events in the Universe.

Provenance: Carla McAuliffe, TERC
Reuse: This item is offered under a Creative Commons Attribution-NonCommercial-ShareAlike license http://creativecommons.org/licenses/by-nc-sa/3.0/ You may reuse this item for non-commercial purposes as long as you provide attribution and offer any derivative works under a similar license.