The Extreme Weather baMEL asks students to weigh the connections between evidence and alternative explanations about the relationship between extreme weather and climate change. Extreme weather is a critical environmental issue facing Earth and its inhabitants.

Provenance: Centers for Disease Control and Prevention
Reuse: This item is in the public domain and maybe reused freely without restriction.
Below are links to resources that will help students use the Extreme Weather baMEL and learn more about fundamental scientific principles related to climate and weather.

This article provides an introduction to the Extreme Weather build-a-MEL (baMEL). It is useful even if you are using the Extreme weather pcMEL with your students. The primary difference between the pcMEL and the baMEL is that with the pcMEL students are given two models and four lines of evidence in a preconstructed diagram where as with the baMEL students choose two models from three and select four lines of evidence from eight to create their own MEL diagram. 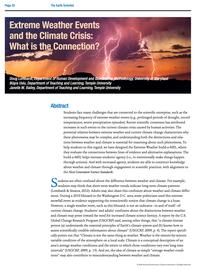 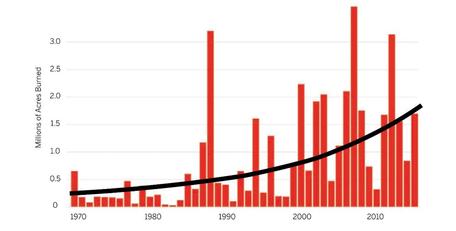 Evidence #1: Since 1950, Earth's atmosphere and oceans have changed. The amount of carbon released to the atmosphere has risen. Dissolved carbon in the ocean has also risen. More carbon has increased ocean acidity and coral bleaching.
Evidence #2: From 1910 to 1995, record rainfall events increased across the United States. Over the same time period, there was a sharp increase in the amount of carbon released to the air. Much of this carbon comes from fossil fuel use.
Evidence #3: Ocean sea surface temperatures have increased since about 1970. In the North Atlantic, tropical storm power has also increased over this same time period. A storm's power depends on its strength and how long it lasts.
Evidence #4: Since 2000, there have been more intense, extreme, weather events around the world. Record rainfall fell in Europe. The southeastern United States had the most active month of tornadoes. The decade from 2000 to 2010 was the warmest ever during the past 1000 years.
Evidence #5: Frequency and size of large wildfires have increased in the Western U.S. since 1970. Average spring and summer temperatures have also risen in the Western U.S. during this time.
Evidence #6: In the last 100 years, global temperatures have increased. In that same time period, heavy precipitation events have also increased.
Evidence #7: Arctic Ocean sea ice extent has declined, with the Arctic warming at a pace two to three times the planet's average. Over the last decade, record cold temperatures and snowfall have occurred in Europe and Asia.
Evidence #8: Earth's orbit is elliptical. But, the shape of the ellipse is almost a perfect circle. In the Northern Hemisphere, Earth is slightly closer to the Sun in winter than in summer.

×
This site on Extreme Weather from the National Climate Assessment provides an introduction to extreme weather events, including heat waves, droughts, heavy downpours, floods, hurricanes, and other storms.