The Climate Change pcMEL asks students to weigh the connections between evidence and alternative explanations about causes of climate change. Climate change is a critical environmental issue facing Earth and its inhabitants.

Provenance: Vostok ice core data/J.R. Petit et al.; NOAA Mauna Loa CO2 record
Reuse: This item is in the public domain and maybe reused freely without restriction.
Below are links to resources that will help students use the Climate Change pcMEL and learn more about fundamental scientific principles related to climate and weather.

This article provides an provides an overview of the MEL diagram activities, using the Climate Change pcMEL as an example. 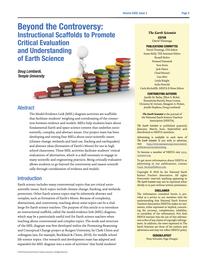 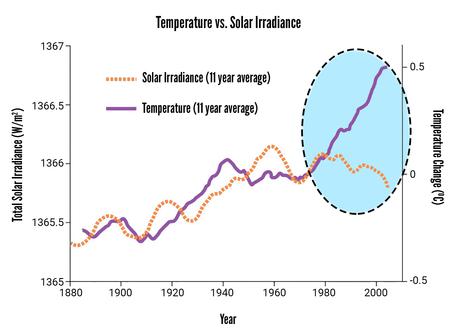 Provenance: Science Learning Research Group, Temple University
Reuse: This item is offered under a Creative Commons Attribution-NonCommercial-ShareAlike license http://creativecommons.org/licenses/by-nc-sa/3.0/ You may reuse this item for non-commercial purposes as long as you provide attribution and offer any derivative works under a similar license.

Evidence #1: Atmospheric greenhouse gas concentrations have been rising for the past 50 years. Human activities have led to greater releases of greenhouse gases. Temperatures have also been rising during these past 50 years.
Evidence #2: Solar activity has decreased since 1970. Lower activity means that Earth has received less of the Sun's energy. But, Earth's temperature has continued to rise.
Evidence #3: Satellites are measuring more of Earth's energy being absorbed by greenhouse gases.
Evidence #4: Increases and decreases in global temperatures closely matched increases and decreases in solar activity before the industrial revolution.

×
The mission of GLOBAL CLIMATE CHANGE: Vital Signs of the Planet is to provide the public with accurate and timely news and information about Earth's changing climate, along with current data and visualizations, presented from the unique perspective of NASA, one of the world's leading climate research agencies.