The Freshwater pcMEL asks students to weigh the connections between evidence and alternative explanations about the quantity and quality of freshwater resources. The availability of usable freshwater as the world's population grows is a critical environmental issue facing Earth and its inhabitants.

Provenance: National Estuarine Research Reserve System
Reuse: This item is in the public domain and maybe reused freely without restriction.
Below are links to resources that will help students use the Freshwater pcMEL and develop an understanding of the spatial complexity of access to freshwater resources.

This article provides an introduction to the Freshwater build-a-MEL (baMEL). It is useful even if you are using the Freshwater pcMEL with your students. The primary difference between the pcMEL and the baMEL is that with the pcMEL students are given two models and four lines of evidence in a preconstructed diagram where as with the baMEL students choose two models from three and select four lines of evidence from eight to create their own MEL diagram. 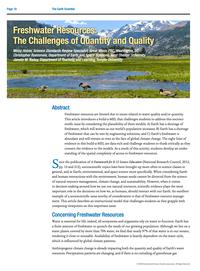 Model A: Earth's freshwater challenges will be solved by engineering solutions.
Model B: Earth has a shortage of freshwater, which will worsen as our world's population increases.

Provenance: Screenshot of Freshwater Evidence 3 Water Costs
Reuse: This item is offered under a Creative Commons Attribution-NonCommercial-ShareAlike license http://creativecommons.org/licenses/by-nc-sa/3.0/ You may reuse this item for non-commercial purposes as long as you provide attribution and offer any derivative works under a similar license.

Evidence #1: Land use changes have generated large pressures on freshwater resources. These changes are affecting both water quality and availability.
Evidence #2: The world's population is increasing. This stresses the supply of freshwater.
Evidence #3: Water reclamation and desalination costs are expensive. These costs vary depending on location.
Evidence #4: Advances in engineering have led to better access to quality drinking water. At the same time life expectancy and quality of life have improved.

×
This site on Freshwater Availability from the National Climate Assessment provides an introduction to extreme weather events, including heat waves, droughts, heavy downpours, floods, hurricanes, and other storms.