The Fossils baMEL asks students to weigh the connections between evidence and alternative explanations about the relationship between early organisms and information about climate changes of the past. By exploring evidence of variations in the fossil record, students can better understand the issues related to climate change today.

Provenance: Ohio Department of Natural Resources
Reuse: This item is in the public domain and maybe reused freely without restriction.
Below are links to resources that will help students use the Fossils baMEL to make claims and justify the connections between fossil evidence of past climates and current scientific models that present Earth's climate as dynamic and ever-changing.

This article provides an provides an introduction to the Fossils build-a-MEL (baMEL). It is useful even if you are using the Fossils pcMEL with your students. The primary difference between the pcMEL and the baMEL is that with the pcMEL students are given two models and four lines of evidence in a preconstructed diagram where as with the baMEL students choose two models from three and select four lines of evidence from eight to create their own MEL diagram. 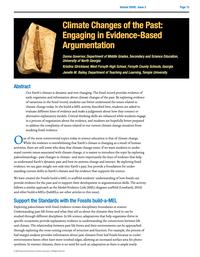 Model A: When people interpret fossils, they often make mistakes. It is misleading to make conclusions about how Earth's surface has changed from fossils.
Model B: Many organisms' fossils are missing from the fossil record. We cannot make any conclusions about Earth's past environments from fossils.
Model C: Fossils provide evidence for Earth's changing surface. Understanding past life forms tells us about past environments. 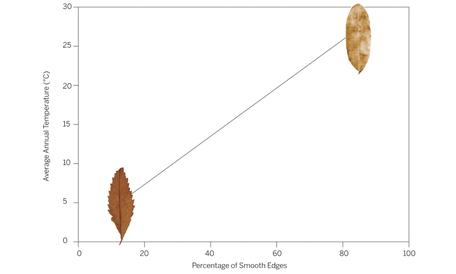 Evidence #1: Trilobites were small animals that lived at the bottom of the ocean. They fed on organic matter in sediment on the ocean floor. Because trilobite fossils are so abundant and well preserved in the limestone and shale rock of Ohio, they were officially named the state fossil.
Evidence #2: Leaf fossils from Wyoming found in a deep rock layer show a climate that is cooler than that of the fossils found above it.
Evidence #3: The Svalbard forest in Arctic Norway is filled with fossils of tropical trees, called Lycopsid. These trees lived hundreds of millions of years ago.
Evidence #4: Mesosaurus is an ancient, large, lizard-like creature. These fossils have only been found in two places on Earth, the southern tip of Africa and eastern South America.
Evidence #5: Fossils of coral reefs have been found in deep water off the coast of Texas. Coral reefs require sunlight to form. Sunlight cannot reach deep water. These coral reefs are about 19,000 years old.
Evidence #6: North Dakota is in a temperate grassland biome. Fossils found in the Hell Creek rock formation include pollen from ground ferns and palm trees, which grow in a tropical ecosystem.
Evidence #7: Many large geographic areas, like the Blue Ridge and Piedmont regions in Georgia, are made up of metamorphic and igneous rock. Fossils are not usually found in these types of rock.
Evidence #8: Hallucigenia is a fossil that was first discovered in the 1970's. Recent discoveries show that scientists pictured this organism upside down and backwards for years. 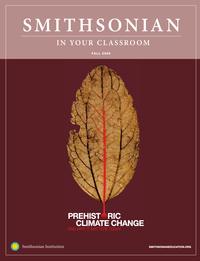 ×
This classroom resource, Prehistoric Climate Change and Why it Matters, from the Smithsonian Institute includes background information and an activity that engages students in leaf margin analysis.