The Moon pcMEL asks students to weigh the connections between evidence and alternative explanations about the formation of the Moon. Understanding how the Moon formed supports understanding of Earth's formation and early history.

Provenance: NASA
Reuse: This item is in the public domain and maybe reused freely without restriction.
Below are links to resources that will help students use the Moon pcMEL and learn more about fundamental scientific principles related to the Moon and its formation.

This article provides an introduction to the Moon pcMEL plus suggestions from classroom use including management tips, potential problems, and activity extensions. 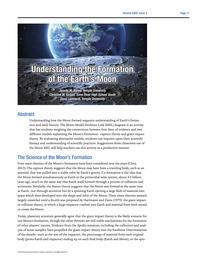 HS-ESS1-6: Earth's Place in the Universe

Model A: The Moon was an object that came from elsewhere in the solar system and was captured by Earth's gravity.
Model B: The Moon formed after a large object collided with Earth and material from both combined to create the moon.

×
Evidence #3. The Moon's orbital plane compared to Earth's orbital plane as viewed from the side. The figure is not to scale; parallel lines on the orbits ( // ) indicate breaks in the distance. The line through Earth indicates its rotational axis. Credit: Wright Seneres.

Provenance: Science Learning Research Group, Temple University. Credit: Wright Seneres
Reuse: This item is offered under a Creative Commons Attribution-NonCommercial-ShareAlike license http://creativecommons.org/licenses/by-nc-sa/3.0/ You may reuse this item for non-commercial purposes as long as you provide attribution and offer any derivative works under a similar license.

Evidence #1: Earth's average density is higher than the Moon's.
Evidence #2: Simulations of other star systems show that planets form when smaller objects collide.
Evidence #3: The Moon's orbit around Earth is tilted compared to Earth's orbit around the Sun.
Evidence #4: The composition of Earth and the Moon is similar near their surfaces. Their cores are different.