In the first part of this module, we looked at observed and predicted changes in temperature and precipitation. Now, we'll consider some the impacts that changes in temperature and precipitation may have on crops. For example, the projected increase in temperature will increase the length of the frost-free season (the period between the last frost in the spring and the first frost in the fall), which corresponds to a similar increase in growing season length. Increases in frost-free season length have already been documented in the US (Figure 9.2.1). An increase in growing season length may sound like a great thing for food production, but as we'll see, that can make plants more vulnerable to late frosts and can also allow for more generations of pests per growing season, thus increasing pest pressure. The complexity of the system makes adapting to a changing climate quite challenging, but not insurmountable. 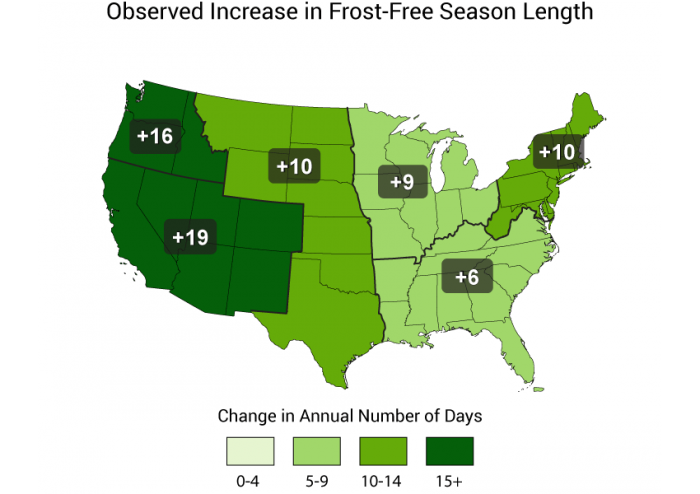 Projected changes in some key climate variables that affect agricultural productivity are shown in Figure 9.2.2. The lengthening of the frost-free or growing season and reductions in the number of frost days (days with minimum temperatures below freezing), shown in the top two maps, can have both positive and negative impacts. With higher temperatures, plants grow and mature faster, but may produce smaller fruits and grains and nutrient value may be reduced. If farmers can adapt warmer season crops and planting times to the changing growing season, they may be able to take advantage of the changing growing season.

The bottom-left map in Figure 9.2.2 shows the expected increase in the number of consecutive days with less than 0.01 inches of precipitation, which has the greatest impact in the western and southern part of the U.S. The bottom-right map shows that an increase in the number of nights with a minimum temperature higher than 98% of the minimum temperatures between 1971 and 2000 is expected throughout the U.S., with the highest increase expected to occur in the south and southeast. The increases in both consecutive dry days and hot nights are expected to have negative effects on both crop and animal production. There are plants that can be particularly vulnerable at certain stages of their development. For example, one critical period is during pollination, which is very important for the development of fruit, grain or fiber. Increasing nighttime temperatures during the fruit, grain or fiber production period can result in lower productivity and reduced quality. Farmers are already seeing these effects, for example in 2010 and 2012 in the US Corn Belt (Hatfield et al., 2014).

Some perennial crops, such as fruit trees and grape vines, require exposure to a certain number of hours at cooler temperatures (32oF to 50oF), called chilling hours, in order for flowering and fruit production to occur. As temperatures are expected to increase, the number of chilling hours decreases, which may make fruit and wine production impossible in some areas. A decrease in chilling hours has already occurred in the Central Valley of California and is projected to increase up to 80% by 2100 (Figure 9.2.3). Adaptation to reduced chilling hours could involve planting different varieties and crops that have lower chilling hour requirements. For example, cherries require more than 1,000 hours, while peaches only require 225. Shifts in the temperature regime may result in major shifts in certain crop production to new regions (Hatfield et al., 2014).

To supplement our coverage of the climate variables that affect agriculture, read p. 18, Box 4 in Advancing Global Food Security in the Face of a Changing Climate (Acrobat (PDF) 10.4MB Jan3 18), and scroll down to the Learning Checkpoint below. 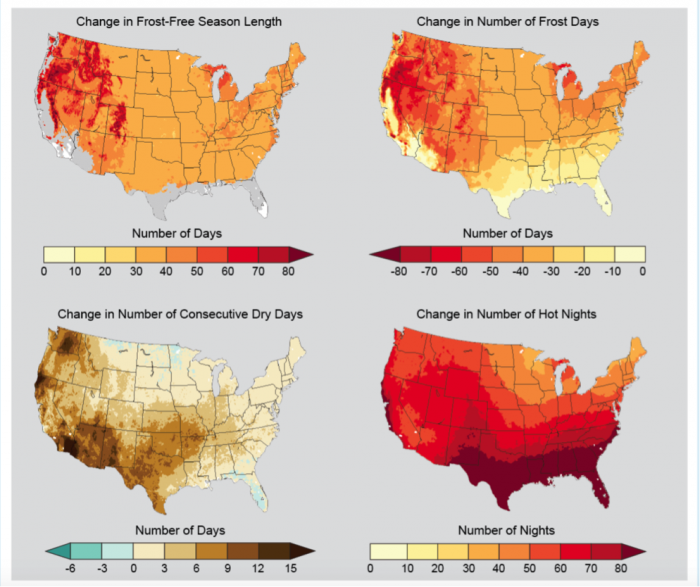 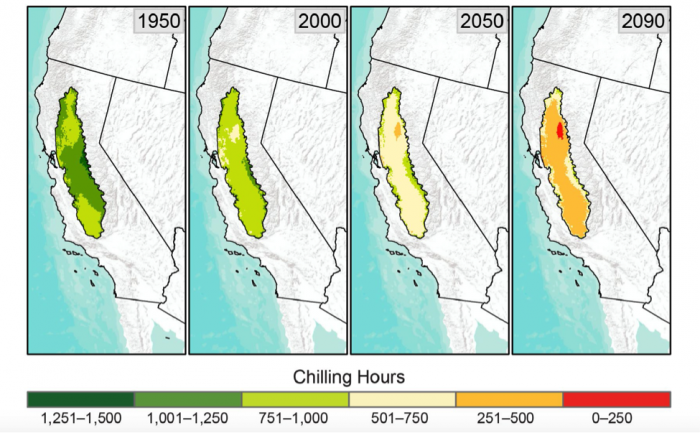 What are some of the challenges that farmers will face in a changing climate?

In the first part of this module, we explored some maps from the National Climate Change Viewer. Discuss how the predicted changes in climate that you saw in those maps (Module 9.1 Projected Climate Changes) will likely affect farmers.

Hide
ANSWER: The NCCV shows that temperatures are predicted to increase, including max and min temperatures. Growing seasons will be longer. Increased temperatures could result in heat stress for some crops and increased yields for others. Changes in temperature may result in changing zones of crop production, so farmers may have to change the crops and crop varieties that they grow. Increasing temperatures will lead to increased evaporation and transpiration rates, reduced soil moisture and runoff. If precipitation in an area decreases, then farmers may need to find alternative irrigation water or change to lower-water use crops. In general, a hotter and drier climate will create the need for more water-efficient farm practices and crops.