Please watch the brief video about resilience and adaptive capacity. The presenter, Terry Chapin of the University of Alaska- Fairbanks, is an ecosystem ecologist who is used to thinking about the stresses that whole systems like ecosystems and food systems confront. Note that he uses the term 'resources' as roughly equivalent to the components of natural systems that support coupled human-natural food systems presented on the previous page. After the video in the knowledge check activity below, we'll ask you to identify the types of resources (i.e. components of natural systems) we've presented as vital to food systems in this course. You should, therefore, think about how the example he presents of Alaskan Native American communities and peoples can extend to many other elements of the food system.

Based on your learning in the course so far:

Can you guess some examples of "adaptive capacity" by human systems within food systems we've seen so far?

Resilience, adaptive capacity, and vulnerability (RACV) are three concepts used to explain how human and natural systems respond to perturbations and shocks. We can use these concepts to understand the responses of agri-food systems to such factors as drought or the occurrence of market shocks or political crises. Here are some definitions of the RACV concepts, understood within a Coupled Natural-Human System Framework.

Resilience is a system property which denotes the degree of shock or change that can be tolerated while the system maintains its structure, basic functioning, and organization. Talking about resilience usually implies thinking about the resilience "OF what TO what". That is, we need to understand the resilience of a system (what system or process?; e.g. crop production; food distribution; farming or culinary knowledge) TO a threat or shock (what kind?; e.g. drought, war, plant disease). A recent report from a United Kingdom scientific commission states that resilience is "the capacity to absorb, utilize or even benefit from perturbations, shocks and stresses" which includes the idea that resilient systems, provided they are sufficiently robust, can even benefit from perturbations. 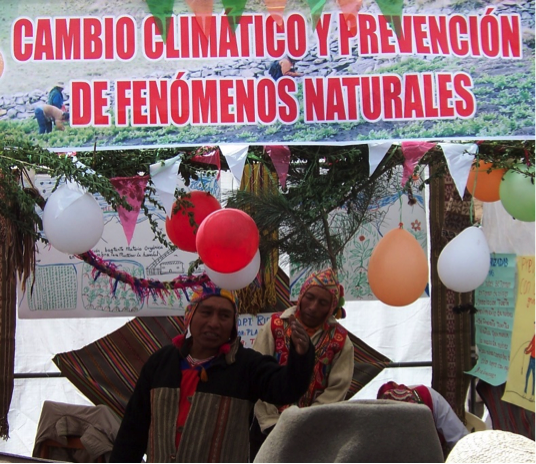 ×
Figure 11.1.4. A farmer-educator with a Peruvian NGO at a "knowledge fair" describes strategies to adapt to climate change and resulting weather shocks that are being evaluated and promoted by a local non-governmental organization in conjunction with indigenous communities. The poster behind the promoter describes how organic matter in the soil helps to retain moisture to adapt to drought shocks.
Credit: Steven Vanek

Adaptive capacities are the social and technical skills and strategies of individuals and groups that are directed towards responding to environmental and socioeconomic changes. In the context of food systems, adaptive capacity is usually exhibited or deployed to maintain livelihoods, food production, or food access. In the context of climate change, it is important to distinguish between adaptive capacity vs. mitigation: Adaptive capacity is deployed to adapt to perturbations in growing or living conditions or shocks brought on by climate change. Mitigation involves actively reducing the threat of climate change, rather than adapting to its effects: for example reducing emissions, reducing meat consumption among high-meat consuming populations, or geoengineering of the atmosphere to reduce CO2 concentrations.

Adaptive capacity is the second important property that refers to the responsiveness of agri-food systems when faced with extreme conditions. Human systems might, for example, have the capacity to switch to alternative land use within the agri-food systems. In these cases, people would be able to adapt to change since they have the capacity to shift their use of land and other resources. Adaptive capacity in the case of natural systems is exemplified by drought-tolerant crops (figure 11.1.5). Such crops may have more developed root systems or biological adaptations for conserving moisture. 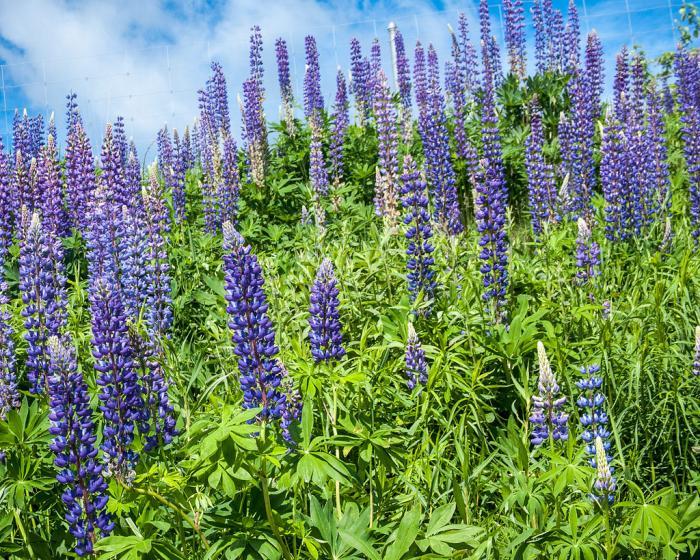 ×
Figure 11.1.5. The Andean lupine, Lupinus mutabilis, pictured here in Bolivia, has a deep root system, superior ability to acquire its own nitrogen for protein from the air, and drought-adapted physiology that allows it to survive and produce lupine beans well into the dry season. It is also a highly nutritious and versatile food crop for consumption and income generation, once bitter alkaloids have been removed from the beans. It thus forms part of a human adaptive capacity in the local agri-food system to a dry climate and drought.
Credit: Paul VanDerWerf, Flickr

Vulnerability is the exposure and difficulty of individuals, families, communities, and countries in coping with shocks, risk, and other contingencies. This can be thought of as the opposite of adaptive capacity, with a continuum of mixed adaptation/vulnerability in between the two extremes of adaptive capacity and vulnerability. Farmers and consumers in extremely poor and isolated circumstances (whether in urban or remote areas) can be considered highly vulnerable because they lack their own ability to adapt to threats, and may be cut off or marginalized from external resources (family, government assistance etc.) that allows them to adapt to changes.

Now we can apply the concepts of resilience, adaptive capacity, and vulnerability to agriculture and food, using a Coupled Natural-Human System (CNHS) framework (Figure 11.1.6) 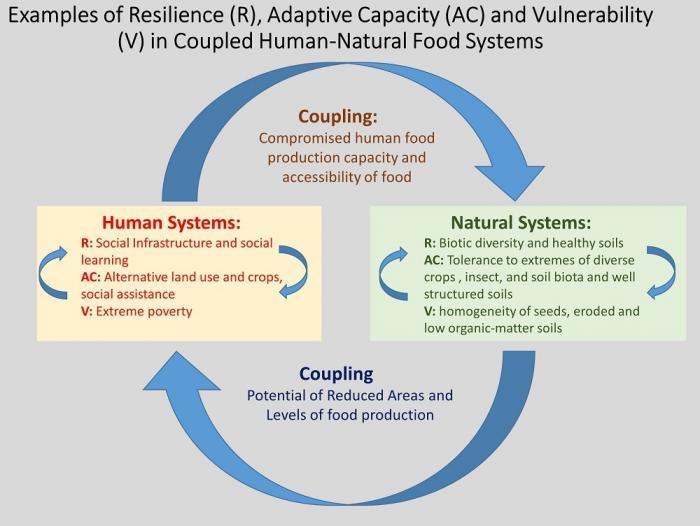 ×
Figure 11.1.6. Examples of Resilience (R), Adaptive Capacity (AC), and Vulnerability (V) in coupled agri-food systems. These examples are shown interior to each of the human and natural systems. Many of the positive practices regarding soils, water, and pests in the previous modules of the course can be considered additional examples of adaptive capacity because they contribute to greater levels of resilience to shocks, in addition to increasing or maintaining production under average conditions.
Credit: Karl Zimmerer and Steven Vanek

As shown in Figure 11.1.6, resilience can be found in both the natural and human subsystems of food systems. You may recognize that many of the examples of natural system adaptive capacity refer to the "best practices" that we have advocated for water, soils, crops, and pest management in sections II and III of this course. These would include examples such as reducing the water footprint of food production, managing soils in a system framework for greater "soil health", and managing pests with ecological practices that seek to avoid pest and weed resistance to our management approaches (Modules 4, 5, 7, and 8 respectively). These approaches are not only important in increasing productivity under average conditions, but also help a food production system to adapt to shocks and perturbations.

Meanwhile, the human component of coupled human-natural food systems also is a vital part of resilience and adaptive capacity. Resilience is higher where there are higher levels of social infrastructure that enable people to share learning and resources in response to shocks and perturbations, such as extreme drought. Social infrastructure, shown in Fig. 11.1.6, includes mutual assistance within families and communities or among regions in a country, coordinated by governments to assist in the case of shocks that affect food production. Social learning is vitally important since it's one of the main ways that people would learning new techniques based on the conditions prevailing in their area. For example, farmers could use social learning to acquire the skills and knowledge to lessen water use, and thereby lessen the degree of agricultural production decline and reduced food access. Biological diversity is a major example of higher resilience functioning in the natural components of coupled agri-food systems. Food production systems with more biological diversity---a property referred to as agrobiodiversity and covered on the next pages---typically have the capacity for greater levels of resilience. This greater level of resilience may result from a mixture of crops and varieties combining vulnerable and resistant type of crop, for any given stress, so that even if some crops fail, others will do well. Different crops and land uses may also produce positive or facilitatinginteractions in which one crop type or wild plant species, for example, provides benefits to another (e.g. nitrogen fixation and better soils or screening from an important pest; see module 6 on crops and the previous section on systems approaches for management for additional examples).

On the surface, resilience and adaptive capacity in systems may seem very similar, and it is true that as defined here they are very aligned. One way to remember the difference is that resilience is a broader system property that may have to do with the interplay of human and natural systems, or one or the other of these subsystems. We can say that a region's food system is quite resilient to drought (a more general statement) if we think for a number of reasons that its food supply would be able to continue mostly without issues during a drought. Adaptive capacity meanwhile is more narrowly focused on the specific skills and mechanisms that are deployed by human systems to contribute to resilience. In other words, we might identify that the system or component thereof is resilient (like the region mentioned above), and then identify sources or mechanisms of resilience in terms of particular knowledge, practices, land uses, or biological properties that are functioning in a food production system, referring to these as adaptive capacity. We turn next to agrobiodiversity as an example of adaptive capacity that can contribute to food system resilience (can you see the difference between the two words in this last sentence?).